Fujifilm was another camera company which kicked off the year with a mass product launch at International CES in Las Vegas, at the pro end announcing a fast prime portraiture lens for its X-series cameras, and a bunch of new Finepix cameras for the consumer market.

The company also announced an all-black model of its popular retro-styled X100S compact camera. All products mentioned below are scheduled for local release in March. No pricing has been provided. 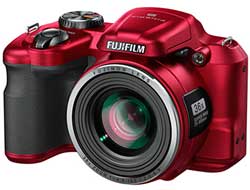 The new 36x FinePix S8600 bridge camera is one of three AA-powered superzoom digicams and the only one for which we have a local release date. The other two are the S9400W (which is Wi-Fi equipped) and S9200 models, both of which have 24-1200mm equivalent f2.9-6.5 zoom lenses, 200K dot EVFs and Full HD video recording.

The FinePix S8600, which will be offered in black, white or red, has the same tiny 1/2.3-inch (6.17 x 4.55mm), 16-megapixel CMOS sensor as its siblings but a three-step collapsible lens with a 25-900mm equivalent range. Features that separate it from the other tow include the lack of an EVF and HD (720p) video recording. All three cameras provide P/A/S/M shooting modes plus an Advanced Filter mode with 10 artistic effects, along with Face Detection for up to 10 faces.

Fujifilm has also unveiled the new FinePix S1, which it claims is the world’s first weather resistant bridge camera. The S1 uses a 24-1200mm equivalent f/2.9-5.6 50x zoom lens. It is equipped with a dual stabilisation system that claims 3-stop lens shift image stabilisation plus 5-Axis image stabilisation. Its 6.17 x 4.55mm backlit CMOS sensor has an effective resolution of 16.4 megapixels. The S1 offers remote shooting via a smart-phone or tablet with photos and movies easily sent to smart-phones and computers using the same Wi-Fi connectivity.

Other features include a new multi-CPU processor that supports a maximum continuous shooting speed of approximately 10 frames/second and provides faster autofocusing and improved camera response times. Full HD movie recording is available and the noise reduction function uses multiple frames to improve image quality at high sensitivity settings. The Movie Scene Recognition function automatically sets what it assesses as the correct exposure for the conditions. 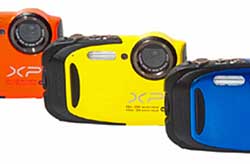 Fujifilm’s latest waterproof camera, the FinePix XP70, will be offered in orange, blue or yellow. It is waterproof to 10 metres, shockproof to 1.5 metres, freezeproof to -10°C and suitable for use in dusty conditions and has the same 1/2.3-inch 16.4 megapixel CMOS sensor as the S8600, plus wireless functionality. The stabilised 5x optical zoom lens includes a 28mm (35mm equivalent) wide-angle setting.

A new Action Camera mode, available with the optional 18mm (35mm equivalent) Action Camera Lens, enables users to mount the camera on the body or sporting equipment for hands-free shooting. In Action Camera mode, the rear LCD turns off automatically to extend recording time. The XP70 offers Full HD movie capture (1920 x 1080) at the press of a button, along with high-speed recording at up to 380 frames/second. Scene recognition is also included, along with multi-frame High Dynamic Range (HDR) capture and a Motion Panorama 360° function. An anti-reflective coating is applied to the rear LCD to make it easy to view or compose images.

The XF56mm f/1.2 R features a DC coreless motor combined with an inner focus mechanism that moves small elements in the middle or at the rear of the lens while keeping the large front elements stationery. This enables faster autofocusing when used with an X-Series camera body that supports phase detection AF. It also offers near silent operation. Durable, metal construction – including the aperture and focus rings – ensure a high quality feel.

Fujifilm has also released a new roadmap for X mount lenses (see below), which heralds five new lenses over the next 12 months. Included will be an f2.8 XF16-55mm R OIS, an f2.8 telephoto zoom XF50-140mm R OIS and a high magnification zoom XF18-135mm f/3.5-5.6 R OIS, as well as a super-telephoto zoom lens and a high-speed wide angle lens. This will bring the total number of lenses in the X-mount line-up to 17. 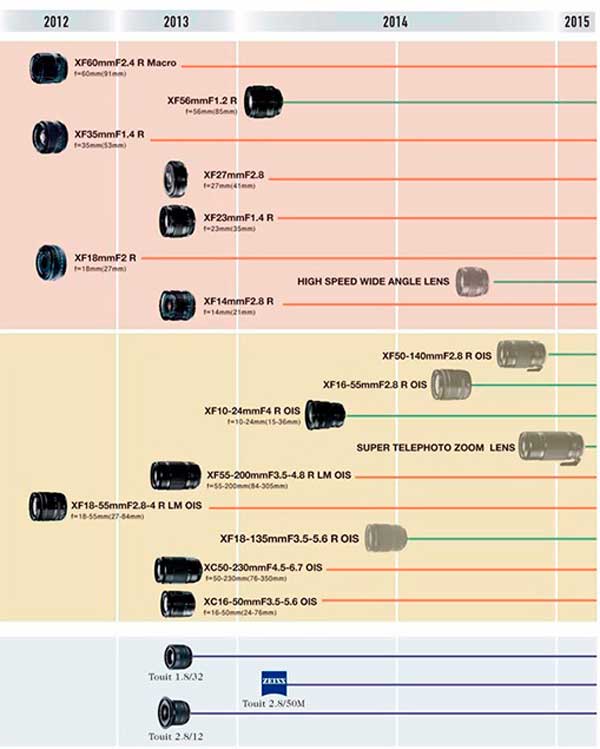