Fujifilm has announced the early March launch of a new premium model in its X-Series, the X-T1, featuring SLR-style handling, mechanical dials and an all-metal body. 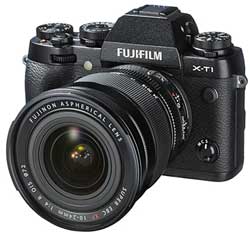 The X-T1 has a durable die-cast magnesium body and the exposure compensation, shutter speed and ISO sensitivity dials are all precision milled from aluminium. Reinforced glass is used for added protection of the LCD screen. It features an 16-megapixel APS format (23.6 x 15.6mm) X-Trans CMOS II sensor.

Combined with weather-resistant lenses (the first of which is promised for mid-year) Fujifilm says the X-T1 is dust and water resistant, and freezeproof. It doesn’t come with a built-in flash, but in other markets they throw  a hot-shoe speedlite in with the purchase price.

A new ‘Multi Mode’ viewfinder that provides four display modes including a Dual mode, designed for manual focusing with a classic split view. It adds a small second screen for checking the focus point.

The X-Trans CMOS II sensor dispenses with an optical low pass filter. Fujifilm says that the colour filter array with a highly random pattern does the job instead.  A doodad they call an Advanced Lens Modulation Optimiser (LMO) integrates data from the lens, sensor and processor to correct diffraction blur when shooting with a stopped down aperture, and compensates for any slight blurring in the lens periphery.

A hybrid AF system achieves fast focusing speeds through the on-sensor phase detection AF system, plus contrast AF for low light. The X-T1 has a maximum sensitivity of ISO 51,200. To combat noise at high ISO, the arrangement of components and circuits around the sensor has been redesigned, ‘keeping blacks black, with minimal grain and no colour casts’.

The sensor is coupled with a new EXR Processor II chip with dual CPU and improved processing performance that Fuji claims doubles the speed of the previous generation processor. The new camera’s start-up time is approx. 0.5 sec., with a shot-to-shot time of 0.5 sec. and shutter time lag to 0.05 sec. Predictive AF and AF tracking enable the camera to follow a subject even at the highest continuous shooting speed of 8 frames/sec.

The Australian recommended retail price for the Fujifilm X-T1 is yet to be advised. However it’s already available for pre-order from the likes of Adorama for the US recommended price of US$1299 body only and US$1699 with an f2.8-4, 18-55mm lens.

COMMENT: It’s time local distributors lifted their game with this ‘not available for two months and we don’t know the price’ rubbish. Local retailers who want to take orders should be provided the marketing collateral and pricing detail so they can compete in the globalised marketplace. Otherwise they risk losing sales to offshore retailers whose suppliers are aware that the market is indeed global.