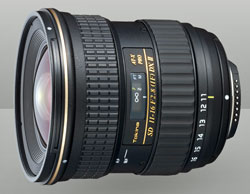 The main upgrade involves the Nikon mount version: the AT-X 116 PRO DX-II has an internal silent focusing motor to allow the lens to autofocus on Nikon bodies that do not have an AF drive gear and motor.

There have also been some adjustments made to the coating for improved optical performance.

This compact ultra wide-angle zoom has a bright, constant f2.8 aperture to make viewing and autofocus possible in lower light situations while maintaining a reasonable size and weight.

Tokina’s One-touch Focus Clutch Mechanism allows the photographer to switch between auto and manual focus simply by snapping the focus ring forward for autofocus and back toward the lens mount for manual focus. Tokina also says the lens is built ‘to stand up to the rigors of daily use by photographers in a wide variety of shooting conditions and environments.’

Other than improvements to the optical coating, there are no changes to the Canon mount. The AT-X 116 PRO DX-II for Canon uses the same AF motor and AF drive system as the previous model.

RRP for the AT-X 116 PRO DX-II is $849 for both the Canon and Nikon mount versions. The lens comes with a 2-year warranty.