Samsung has announced the new leader of its WiFi compact range, the WB250F. 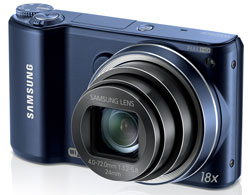 The 14.2-megapixel (BSI CMOS) WB250F, available in cobalt blue and white, has an 18x optical zoom lens starting at a wide angle 24mm. It carries an RRP of $279 (which excluding GST is almost bang-on the US suggested price of US$249.)

It’s the first of several Samsung compact cameras that will be released in Australia in coming months which feature Wi-Fi connectivity using Samsung’s ‘SMART Camera 2.0’ technology.

This makes it easy for users to capture, edit and share photographs via popular social networks wherever a Wi-Fi interface is available. The WB250F’s AutoShare function allows images and video to be sent and saved straight to a smartphone or tablet via a WiFi connection. This is done ‘automagically’ as soon as the photo is taken if a WiFi network is available.

A Direct Link button on the top of the camera allows users to assign a wireless function that makes sharing images and video easily with friends and family. A new Samsung SMART Camera App for the Android platform, downloadable from Samsung, allows smartphone users to connect the WB250F via WiFi and edit, share and back-up images. The SMART Camera App integrates Remote Viewfinder and Mobile Link capabilities as well as the new AutoShare tool that enables users to control operations from shooting to sharing.

Other features include a pop-up auto flash and hybrid touch interface that combines a touch-screen monitor with five-way navigational keys. The camera’s mode dial allows users to select P, A, S and M shooting modes as well as ‘Best Face’, SMART Mode and Motion Photo functions.

Another five Samsung WiFi compacts from $150 to $330 are also slated for release.