In parallel with CES, Canon Australia today unveiled the PowerShot N – ‘a new type of compact camera that offers a different approach to capturing creative, spontaneous photos and sharing them instantly with social networks through integrated Wi-Fi and one-touch connectivity to smartphones and tablets.’ 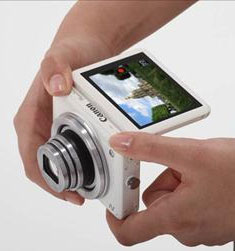 Among other innovations, the shutter operation is positioned on one of the camera’s two lens rings.

The PowerShot N will not be available in Australia until May.

‘This camera is built for social media savvy shooters who crave better quality photos, effortless creativity and connectivity for quick sharing,’ said Kai Lebens, product manager, Consumer Cameras and Lenses, Canon Australia. ‘The PowerShot N is a revolutionary camera inside and out with a new super small square design, featuring the new Creative Shot mode, One-Touch Wi-Fi and a host of powerful features..’

When an image is captured in Creative Shot mode, the PowerShot N analyses the scene and determines which of a host of creative elements could enhance the scene or offer a different creative angle. For example, variables including composition, exposure, point of focus, white balance, gradation and contrast are considered before five alternative versions of the original shot are automatically generated. These can then be shared at the touch of a button.

The PowerShot N also features a new Hybrid Auto mode which records a four second movie before every still shot in 720p resolution, before using Canon’s Smart Auto technology to determine the best settings to capture the perfect shot. At the end of each day, the four-second clips are merged into one to tell the story of the day’s images – perfect for adding new context to an online album.

The PowerShot N features integrated Wi-Fi and one-touch connectivity to smartphones or tablets. Users can upload images or movies to social networks such as Facebook and YouTube just moments after they’ve been captured. Once home, the best shots can be printed wirelessly or transferred to a PC. The GPS via mobile feature, using a free Canon smartphone app, can also add location information from a GPS-enabled smartphone or tablet to an image.

The unusual design of the PowerShot N sets it apart form other compacts in the Canon range. The compact, symmetrical design, tilting touch screen and an innovative system of lens rings – the twist lens ring can be turned in either direction to operate the zoom function, while a second ring is used as the shutter release – allow the camera to be used any way up, even upside-down.

The advanced capacitive 7.1cm (2.8-inch) touch screen allows users to control essential functions, such as focus or the shutter, with a simple touch, and review their images with familiar, intuitive gestures.

Available in white or black, the square, metal body houses a 28mm, 8x optical zoom lens, making it easy to shoot groups and landscapes. Canon says that with its ‘ZoomPlus’ digital zoom technology, the Canon N is capable of ‘full-resolution’ shooting at up to 16x zoom (which seems to defy logic).

Full HD video (1080p) can be recorded with stereo sound.