Sony’s $620 million investment in scandal-troubled Olympus will give the electronics giant entry into the lucrative medical imaging market, with the two companies also co-operating in digital camera manufacture, according to an AP report. 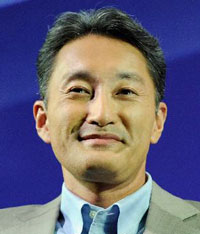 The alliance, announced last week, has Sony investing 50 billion yen ($620 million) to become the top shareholder in Olympus, with an 11 percent stake.

Olympus is the leader in the global endoscope market, and Sony can contribute its high res (4K) and 3D technologies to new endoscopes and other medical tools.

In digital cameras, Sony and Olympus will initially gain economies of scale by sharing components ‘including the supply of Olympus technologies such as camera lenses and mirror cells to Sony, and the provision of Sony image sensors to Olympus.’

Olympus is deeply in the red after the revelation of losses covered up since the 1990s. The scandal surfaced after its British former chief executive Michael Woodford turned whistleblower and raised questions about dubious investments, and was subsequently fired. Three top Olympus executives pleaded guilty in a Tokyo court last week on charges of falsifying financial reports.

Sony CEO Kazuo Hirai (pictured above right) said Sony is aiming to control more than 20 percent of the medical-equipment-for-surgery market by 2020.

Of Sony’s 50 billion yen ($640 million) investment, about half will go into developing endoscopes equipped with 3D and 4K technology, according to Olympus.

It could be in this lucrative niche that 3D and the ultra-HD 4K standard make their mark for Sony, rather than in consumer products, where 3D is still really a gimmick and 4K unaffordable.

Hirai said Sony is aiming to control more than 20 percent of the medical-equipment-for-surgery market by 2020.

Sony needs a turnaround after reporting losses for four straight years as it fell behind in portable music players, flat-panel TVs and smartphones. Sony’s losses for the fiscal year to March were the worst in its 66-year history.