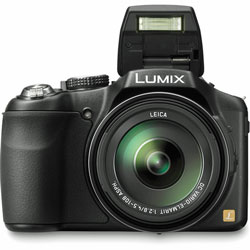 The new cameras were revealed at an event for selected CE and enthusiast media on the NSW central coast.

The top-of-the-range Lumix FZ200 (pictured right) features a lens with a constant f2.8 aperture across a 24x optical zoom range, which at the telephoto end is a world first in digital compacts. The new FZ60 also features a 24x zoom range and both lenses start at a wide angle 25mm.

The FZ200 also features a newly designed 1.3K electronic viewfinder, with 100 per cent field of view. It offers RAW capture. The new cameras both have a 25mm ultra wide angle lens, making them perfect for shooting dynamic landscapes or group portraits. 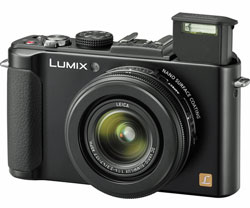 The lens features f1.4-2.3 maximum aperture in a 24-90mm (35mm equivalent) zoom range. (35mm camera equivalent).Panasonic says ‘this is around four times as bright as an f2.8 lens, and provides scope for the use of a higher shutter speed to capture stunningly sharp, blur-free images in low-light situations…’

The lens, the image sensor and the image processing engine have been completely redesigned from previous LX models.

The newly developed 10-megapixel high sensitivity MOS Sensor has an expanded dynamic range, according to Panasonic.

The body has also been redesigned, with the aperture ring allowing direct control of aperture, while the internal neutral density filter makes it possible to reduce light for a slower shutter speed. A new focus lever activates the variable AF area.

It also includes Panasonic’s ‘Level Gauge’ feature for precision framing. The three-inch LCD is redesigned for better visibility. The hot shoe allows attachment of advanced accessories such as an optional Live View Finder for high visibility when shooting in strong light.

In addition to full manual control, the Lumix LX7 offers a wide variety of shooting features such as 16 ‘Creative Control’ filters, Photo Style and Time Lapse. 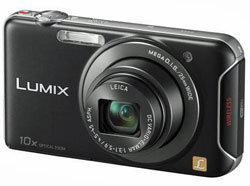 The slim and stylish Lumix SZ5 offers Wi-Fi connectivity to a smartphone for sharing photos.

It can be connected directly to a smartphone or device by using it as a wireless router.

Users can also save photos to a Panasonic server (aka ‘The Lumix Club’) and transfer images to Facebook and YouTube, etc, via smartphone or PC.