January 8, 2012: Nikon has released details of its latest professional DSLR, the D4, immediately prior to the CES technology show in Las Vegas. 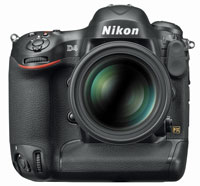 Scheduled for release in February, the D4 will be available before Canon’s EOS-1DX, which goes on sale roughly a month later.

Designed primarily for sports and press photographers as well as photojournalists, the D4 features a magnesium alloy chassis and durable body that is highly resistant to dust and water, thanks to extensive weatherproof sealing. A thermal shield in the top panel of the body minimises the risk of over-heating for photographers working in hot, sunny conditions. The camera body is optimised for both horizontal and vertical shooting with a second shutter button, control dial and joystick to improve its usability when shooting in portrait orientation.

The D4 also includes a revamped video mode that provides some attractive new features not seen before on a Nikon DSLR. This will undoubtedly increase its appeal to existing Nikon users who shoot video in addition to stills.

Key features of the new camera are as follows:

The EXPEED 3 processor, which was introduced  in the Nikon 1 mirrorless cameras, has been optimised for the new DSLR  and supports continuous shooting at up to 10 frames/second with autofocusing or 11 fps when focus and exposure are fixed on the first frame. There’s also an option for 12 fps at 8-megapixel resolution. The camera’s buffer memory will accommodate approximately 200 JPEG frames or 98 NEF.RAW frames.

Time-lapse photography is also supported and image sequences can be played back as time-lapse movies at normal playback speed.

The D4 is one the first to support the new XQD Compact Flash memory card format and has twin card slots, one for XQD and the other for regular CF cards. The CF slot supports UDMA 7-compatible cards.

The 3.2-inch LCD monitor has a resolution of approximately 921,000 dots and features reinforced glass and a wide viewing angle. Close integration of the glass and panel reduces internal reflections. A virtual horizon that shows the sideways tilt (roll) and forward or backward pitch of the camera can be displayed on the monitor and in the viewfinder.

Face detection and face recognition AF/AE technologies have been introduced into a professional camera for the first time. The D4 can identify up to 16 faces and will priorities the face closest to the camera by default. (Note: There is no display in the viewfinder that shows when a face or faces have been recognised.)

White balance is adjustable in units of 10 K and users can select 5-mired steps with the camera’s sub-command dial. Settings can also be specified separately for shooting (white balance applied to images) and monitor display with still-image shooting in live view mode.

A dedicated video button (illuminated and user re-assignable) is located beside the shutter button for fast and easy access. A function button on the front panel is also customisable. Key button controls are illuminated for ease of use in dim lighting.

The D4 is the first FX camera to support Full-HD 1080p video recording with selections for 30p and 24p frame rates. HD capture at 720p with frame rates up to 60p is available for slow-motion shooting. Video is recorded with H.264/MPEG-4 AVC compression and b-frame encoding, which prevents image break-up by more accurately reconstructing the image data in between frames. Maximum clip length is 29 minutes 59 seconds

The D4 provides includes new functions that support a more efficient workflow for professional photographers. Among them are built-in copyright embedding facilities and the ability to add IPTC (International Press Telecommunications Council) information to images.

Released concurrently with the D4 is a new compact Wireless Transmitter (H062). Powered by the camera, the H062 also supports the new IEEE 802.11n (1 x 1) standard, enabling data transfer at twice the speed possible with the WT-4 (which can also be used with the new camera).

The camera’s HTTP server mode can be used to display a list of images stored on the memory card. It also enables basic camera control, live view and movie recording using the Web browsers on portable devices (laptops, tablets and smart-phones).

Synchronised release (H062 only) mode enables synchronised shutter release of up to 10 cameras (D4 cameras, each with its own H062) with the D4 used as the master controller .