A new wearable camera from British company OMG takes auto-everything photography to another level, detecting the most appropriate moment to snap a shot and then doing so without human intervention. 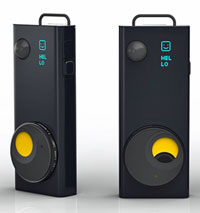 The Autographer (pictured right), launched this week, will be on sale online by November, according to OMG, priced at  £399 ($625). A range of sensors – an accelerometer, a light sensor, a magnetometer, an infrared motion detector, a thermometer, and a GPS system combine with a 5-megapixel image sensor, and pictures are taken when there are sudden changes that indicate significant actions. Autographer uses an all- glass wide-angle (136-degree field of view) fixed-focus lens. It has 8GB of built-in storage, Bluetooth communications, and weighs just 58g.

It uses software developed by Microsoft Corp to chose the best moment to capture an image – up to 2000 a day. These can then be combined to create a visual record of an event like a party, a music festival or a typical day in the life of the owner.

These can be reviewed in about 5 minutes, placing the Autographer in between a video and stills capture device.

The Autographer can be worn around the neck, clipped to clothing or placed in a particular vantage point.

OMG has previously used its stop-motion technology in fields ranging from computer game development to surveying roads. This is its first consumer product.

It was originally developed as a memory aid for people with dementia, but launched to a broader market after OMG noted users and their families also using the devices to record and remember special occasions.

OMG says the potential market for Autographer is 3.5 to 4.5 million in the UK alone, ranging from the gadget lover, through vocational and professional users, to life-bloggers who aim to capture and document their every-day lives.

The designer, electronics engineer Lyndsay Williams, formerly worked with Microsoft Research and was more recently involved in development of the iPhone 4:

‘A lot of the design is similar to the iPhone 4, because I was working on both at the same time.’ she is quoted as saying in an article in technology website, ZDNet. (A statement which will probably encourage dear old Apple to sue the pants of the fledgling business if there’s any indication that the Autographer is a viable product!)