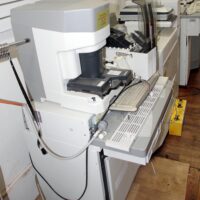 The 3301 has a blown laser & arcnet issues. We've been stripping it for parts to keep the 3501i operational. 1 rack has been dismantled for parts & some of the heaters have been removed to use in the 3301. With the 3301 is an S-II scanner

The PCB that controls the chemical sensors on the 3501i has failed. It has a few other imaging issues & is only fit for parts.

Also going with the new machines are 8 paper magazines.

By stripping the machines & selling the parts you should make more than your money back. We don't have the time to strip the machines.

$10,000 inc. gst for both machines. You have to organise your own freight.