What’s the deal with: Meike lenses?

Hong Kong optics manufacturer, Meike, rose to prominence somewhat suspiciously in 2018 with affordable M43 cine prime lenses, and has gone on to rapidly expand its stills lens range. It’s suspicious as Meike’s break out products were ‘nearly identical’ to a line of cine M43 prime lenses by a fading competitor, Veydra, which shut up shop just a year later.

There is lots of talk about Chinese manufacturers nefariously reverse-engineering innovative products by established brands to create cheap knock-offs. An established brand will sub-contract a Chinese factory, and someone there will steal the IP and re-create the product with inferior materials. While it sounds plausible, and accusations have been thrown around, this isn’t the case with Meike. Rather, it’s speculated the Chinese optics manufacturer cut a deal with a Veydra co-founder as the company headed towards turmoil.

Meike has now built a reputation in cinematography, but remains a ‘cheap and cheerful’ option for stills photographers.

It’s unusual that Meike has been slow to develop quality stills optics, while winning over some in the cine lens market. But what it may lack in stills photography quality, it makes up for in quantity. Meike offers a range of lenses for Canon EF and Z, Nikon Z and F, Sony E, Fujifilm X and M43 cameras.

For some perspective on its rapid expansion in stills, Meike recently announced an ASP-C 10mm f2 manual focus prime lens for five mounts, including the Canon RF. Canon has only just unveiled its first line of crop-sensor RF cameras.

So the team at Meike are either preternaturally intuitive, being tipped off, easily able to adapt a design to a different mount, or all of the above.

At this stage the Meike brand wasn’t established. But the mould factory operators thought they could try their hand at designing products similar to what they were helping the Japanese build.

So in 2005 – or 2007, depending on where you get your information – Meike was established ‘to facilitate operating our own brand, strategically steering its main business to R&D, manufacture and sales on photographic equipment, including lens for camera’. Perhaps this may have included a few reserve-engineering experiments?

We don’t want to mimic that slightly pompous, worldly friend who corrects everyone’s pronunciation of ‘pho’ or ‘paella’ when going out for lunch, but let’s quickly clear this up. Having pronounced it ‘Meek’ for a while, research suggests it’s apparently ‘May-kuh’.

Despite launching in the mid-noughties, Meike was slow to gain much interest. Vigorous Googlin’ shows few mentions of Meike until 2017. For about a decade it was a truly obscure brand, likely sold direct via eBay to bargain-hunting cheapskates who care not for red dots and brand names.

YouTube camera hardware reviewer, Christopher Frost, a softly-spoken Brit who has reviewed almost every budget contemporary lens on the planet, uploaded a review of a Meike 35mm f1.7 lens in 2017. It looks like a clunky bit of gear – completely manual, including focus and aperture control. But it produced decent results for the low price of £80 (AUD$140).

So it was essentially competing with low-cost second-hand analog lenses, which photographers could mount to a digital camera with an adapter. 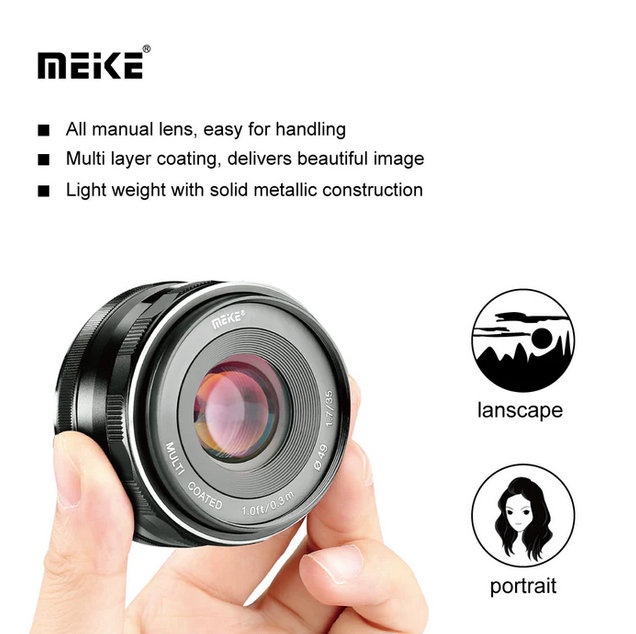 According to a blog post by Matthew Duclos, who worked with the Veydra team, the fledgling company was a ‘small batch’ manufacturer, driving overheads sky high.

In March 2017, the Veydra warehouse was robbed after receiving a major shipment, crippling the company and halting production. Behind the scenes Zhang and Avery were apparently having disputes regarding the company’s direction, which according to Duclos led to nasty lawsuits.

‘Perhaps not so coincidentally, when Veydra stopped producing inventory after the lawsuit in 2017, a curious new lens began popping up around the web in 2018: Meike. These lenses looked nearly identical to Veydra Mini Primes but at a fraction of the price tag. Speculation began flooding the Veydra Facebook group and forums. How was this possible? Could someone have copied the Mini Primes that carefully? Was Veydra selling off old stock under a different name? Did someone sell the designs to another company to skirt around litigation?

The truth is locked up in lawsuits but it’s not hard to read between the lines. I suspect that Jim contracted the optical and mechanical designs to an outside factory during the original Veydra production. The exact relationship and manufacturing path is still unclear but what is clear is that Meike has a much larger, more sophisticated manufacturing operation than that of the original factory that Veydra lenses were produced in.

According to Duclos, Meike’s optical and mechanical design was ‘strikingly similar’, but better ‘in almost all areas’. Cheaper, too, thanks to Meike’s large-scale in-house manufacturing capabilities.

Substance to the speculation was provided when an online video showed Avery, ‘the original co-founder of Veydra’ promoting Meike lenses.

‘In 2019 Veydra went out of business. But out of that came the birth of Meike cine lenses,’ Avery says in the video. ‘The Meike cinema primes have improved coatings and performance and optical qualities, as well as mechanical quality. This enabled a very significant increase in production quantity, which also lowered the cost.’

Online pundits speculated this video was somehow linked to the outcome of lawsuits.

Meike has since gone on to design stills lenses with features like autofocus and aperture control, but unlike in the cine industry it’s yet to establish a reputation for designing high-quality products, affordable though its lenses are.

The first autofocus lens, released in 2018, was criticised by Frost – who is normally quite kind and forgiving – for having sluggish, inaccurate and extremely noisy AF. The AF noise sounds like the zoom lens on an old analog point-and-shoot. Almost nostalgic enough for hipsters to embrace!

The AF noise issue has been somewhat resolved with the inclusion of a stepping motor in a recent upgrade. But apparently the AF accuracy is still ordinary.

While Meike’s new product releases are often covered in the global photo media, the local presence in the Australian specialist retail sector is virtually non existent. Whereas the likes of Laowa, Yongnuo, and Viltrox are available at some of the bigger retailers.

This miniseries of article by Inside Imaging has explored the story behind the lens manufacturers listed above. Each brand has gained popularity in the global market for a specific line of products, and then what follows is typically rapid expansion. Yongnuo with flash triggers; Viltrox with lens mount adapters; Laowa with quirky niche lens products; and Meike with M43 cine lenses.

But what’s remarkable is these brands all emerged in the last few years. And for all of these more ‘established’ Chinese players, there are many others still peddling cheap wares via eBay, Amazon, or Alibaba. Waiting for that big break.