A recent survey into the state of the global professional photographic industry has revealed photographers are ‘cautiously optimistic’ about the future of their business, while also noting their resilience during the Covid-19 pandemic. 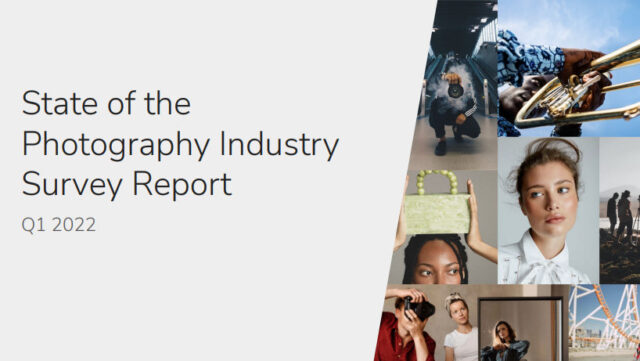 The second annual survey, conducted by photography website platform Zenfolio, asked photographers to share information about how they’ve fared through the pandemic and for their perspective on the future. It also asked for other background information on topics such as employment type, income, photography specialties, gender, gear, and so on.

‘Similar to the experiences of most businesses over the past two years, the photography industry was
not immune to adverse repercussions and operational challenges,’ Zenfolio concludes in the document. ‘However, when considering “fight or flight” responses, photographers as whole showed resilience by adapting and sticking with the craft and commerce they love.

Now that typical events benefiting from photography are filling up family, school, and business calendars with reunions, celebrations, conferences, school & sports activities – hopefully photographers will benefit from a robust rebound in 2022.’

Just under 4000 photographers responded to the survey, with 71 percent of respondents coming from either the US, UK, Canada or Australia. Additionally, 71 percent are also either full-time or part-time self-employed.

Inside Imaging isn’t aware of any other publicly-accessible global photo industry survey. This means the report shines the brightest light on what the collective experience is for professional photographers in four major English-speaking western countries.

The surveys’ finding aligned with our Covid-19 pandemic coverage, with Zenfolio describing photographers as ‘cautiously optimistic, and ‘resilient’ – two terms which sum up the sentiment felt by photographers interviewed by this publication.

According to the State Of The Photography Industry survey, photographers’ outlook has improved in 2022, with 56.5 percent anticipating business to get busier, 32.2 percent thinking it will remain steady, and 11.3 percent predicting a decline. Zenfolio’s calling that a total of 89 percent of photographers who are optimistic.

This is almost a complete reverse to 2021, when 18.8 percent of photographers anticipated business to get busier, 17.3 percent thought it would be steady, and a whopping 63.8 foresaw a drop in business.

A large majority of respondents – 43.6 percent – stated that they lost more than 40 percent of revenue due to Covid, with the next highest being a 20-40 percent revenue drop at 16.2 percent. Only 12 percent reported a revenue increase.

This, again, aligns with an Inside Imaging Readers’ Poll, where we asked: ‘has the pandemic and subsequent lockdowns reduced your income by…’. The majority, 56 percent, said they lost more than 50 percent of income, followed by 16 percent stating the loss was between 25-50 percent. Although 15 said it was ‘business as usual’.

Just under 75 percent of Australian photographers who responded to Zenfolio’s survey said 2021 was ‘slower than expected’. This figure is roughly the same for the UK, Canada, France, and Germany. Dutch and Portugeuse were apparently hit the hardest, with over 80 percent finding the year slower, while US and Spanish photographers were the busiest.

So onto resilience. Just under 50 percent of photographers began expanding their business and taking on new types of shoots. More than 50 percent changed how they do business, which is partly forced as social distancing, checking in, and sanitising became regulatory in Australia.

That’s about all of the Covid-related information from the survey that has relevance to the local professional photo industry.

Most of them – 20 percent – shoot portrait, followed by landscape at 11.4 percent and wedding at 8.7 percent.

Over half of respondents are either individuals or family-owned businesses (27.7 percent), or in a small-medium business. The rest are fairly evenly split between working for agencies, publications, institutions like a university or NGO, and enterprise businesses.

Interestingly, word of mouth remains the top marketing tool leading to more clients for 61 percent of photographers, followed by 40 percent for having a portfolio website. The power of social media may be waning, with just 38 percent finding Instagram the best tool, followed by 25 percent for Facebook. 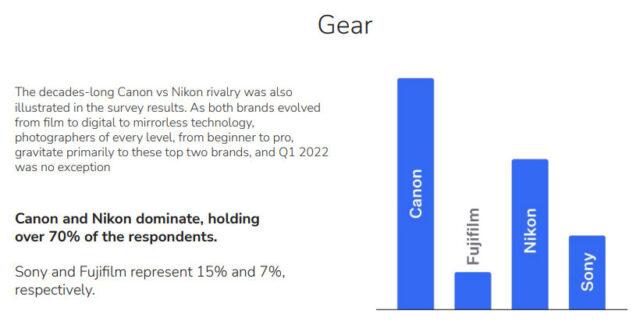 And, to no surprise, Canon is still the most popular camera brand. By far. Followed by Nikon, Sony, and then Fujifilm.

There is loads more info in the paper, which has been made quite digestible. Accessing the document is free, although it does require one to hand over their e-mail address to Zenfolio. Click here for more info.