As the Australian federal election heats up, the Murdoch press has failed to clearly disclose several instances where it published campaign photos sourced from the Prime Minister’s Office. 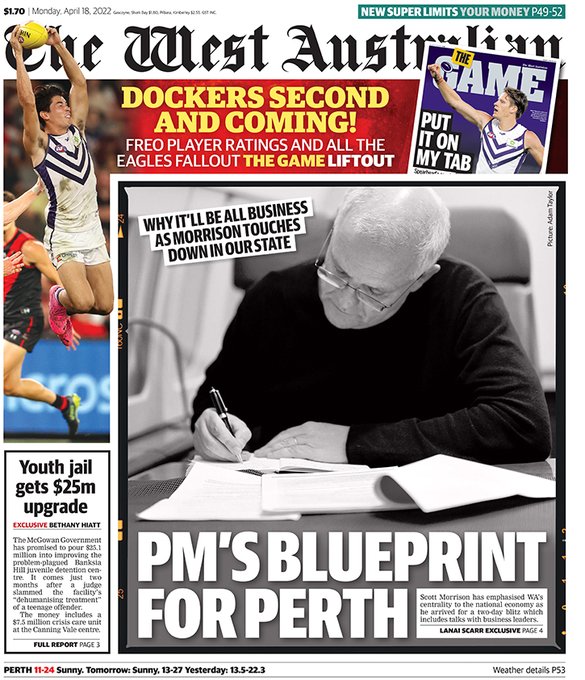 There is a perception News Corp favours the Liberal Party, and this plays a major role in influencing public opinion of its readers. Additionally, Murdoch mastheads have torn apart their once-bustling staff photography departments, yet the need remains for pictures to serve as a visual aid.

When staff or freelance photojournalists aren’t documenting news events, and photos can’t be sourced from news and stock agencies or the archive, the Murdoch papers won’t hesitate to fall back on pictures curated by the Prime Minister’s Office. Yet they rarely disclose this with clarity, with editors often only crediting Taylor or Hunter, or reducing the credit to an acronym, PMO.

With an election looming and politicians in full campaign mode, it’s a triumph to have these sanitised photos appear in the news.

So what photos by Hunter and Taylor, of their clients Barnaby Joyce and Scott Morrison, have been disguised as press photos in the media?

Joyce – always looking unapologetically Aussie with his ‘trademark’ Akubra hat – can be seen in the Courier Mail sporting a huge grin while riding a horse; or having some quality family time at a water park in the Daily Telegraph and Daily Mail; or in The Australian standing stoic with a rugged outback landscape behind him (above). To the Daily Mail’s credit, it fully credit’s ‘Office of Deputy PM/Brad Hunter’.

Morrison’s photos are more ‘prime ministerial’, and there is an affinity for sleek black-and-white snaps of the PM within proximity of a desk. Taylor recently bagged a front page picture in The West Australian. On Monday, April 18, his monochrome photo of Morrison writing notes while on a plane heading west, featured the caption ‘Why it’ll be all business as Morrison touches down in our state‘.

The Australian and Sky News are particularly fond of Taylor’s images. They’ve published photos of Morrison confidently marching through corridors with treasurer, Josh Frydenberg, taking seflies and shaking hands with tradies, posing at the magnificent 12 Apostles and other classic PR-style shots captured from a low angle of a warm, smiling leader. For someone not on the Murdoch payroll, Taylor has likely received more photo credits than anyone else during this election cycle.

It’s unclear why the papers rarely make it clear the pictures are sourced from the Prime Minister’s Office, and instead opt for the acronym. There have been numerous instances where this issue has been raised, yet for whatever reason the editorial decision is to keep it short and simple.

Fairfax Media claims to have a policy stipulating that only under ‘exceptional circumstances’ will it source photos from the Prime Minister’s Office, such as when access is limited and other images are not available.

Keep an eye out for more photo credits to Adam Taylor and Brad Hunt. With the election well underway, there are sure to be plenty more photo ops in the pipeline.