The signs aren’t all that good for the future of silver halide based colour picture-taking and making. A lack of commitment by Fujifilm; corporate dystopia on the Kodak side of the silver halide world; shrinking economies of scale and associated higher costs; threats to ongoing supply of key film and chemical ingredients; soaring shipping costs; stronger dangerous goods transport codes; and a big uptick in the price of silver are all conspiring to rain on the parade of analog photography enthusiasts.

In this article we will focus on the colour film market, with a closer look at the fast-shrinking silver halide paper and chem segments in our next issue:

The range of roll fills available is shrinking each year, and recently subject to annual eye-watering price rises. Kodak film is at least 50 percent more expensive than it was 2 years ago. Fujifilm has been bumping its film prices up each April for the last few years. In what’s becoming an annual tradition, Fujifilm cites higher raw supply prices, increased transportation expenses and a decline in demand as the reasons for the price increases. (A decline in demand, that’s not what Kodak is telling us?)

More so than Kodak Alaris-Eastman Kodak, Fujifilm seems to have lost interest in film manufacturing. Last year it announced a major change in direction, under the title of VISION 2023, ‘investing 1.2 trillion yen over three years to accelerate growth mainly in the healthcare and highly-functional material businesses.’

Fujifilm’s photographic businesses play a cameo in this new vision, with the popular X-series and Instax instant cameras mentioned in despatches, but irony of ironies, there is no place for film in Fujifilm’s future.

Kodak seems a bit keener on persevering in the stills film market – witness the re-launch of Ektachrome a couple of years back. Kodak Alaris, which only survives due to the indulgence of its owner, the UK Pensioners Protection Fund, even mentions film as a positive contributor to its 2021 results: ‘The continued resurgence of interest in film photography in combination with selective price increasesensured that revenue exceeded the previous fiscal year.’

Splitting the film business away from paper and photochem before flogging that business off to Chinese paper finisher Sino Promise indicates that Kodak Alaris, the current brand licence holder for film, sees the business as part of its future.

But with one company owning the rights to the film brands (Kodak Alaris, UK), another owning the rights to the silver halide paper and chemicals brands (Sino Promise, China – for now), a third (Eastman Kodak, USA) manufacturing the film, and yet another company doing the ‘elaborately transformed’ bit of the manufacturing of the paper (Carestream Health, USA) it has all become a bit of a muddle.

And speaking of elaborate transformation (as opposed to Byzantine business structures!), while it’s now seen as a semi-obsolete technology, coating photographic film is an extremely sophisticated manufacturing process – with tolerances similar to those of the semi-conductor industry. Here’s an in-depth look at the first part of the process:
https://www.youtube.com/watch?v=HQKy1KJpSVc

So while it is relatively easy to manufacture bad film, the quality and tolerances consistently achieved by Fujifim and Eastman Kodak, after decades of development, remains a feat of modern manufacturing. It doesn’t come easy and it doesn’t come cheap.

Without economies of scale, the unit cost of rolls of film will continue to rise. With that in mind, continued outsourcing of manufacture to Eastman Kodak is probably the future for Fujifilm colour film, if it is to have any.

Here’s a couple of responses to Fujifilm’s latest global announcement of film price rises of between 20 and 60 percent:

‘Well, that’s the end of color film photography for me. The price hikes of the last two years, many products almost always out of stock. I have decided no more color film for me. I still have about a dozen color rolls in the freezer and one set of unused chemicals, will be using them over the upcoming year or two and that’s it.’

‘…if film becomes expensive…it will be too much to support what is a side hobby in my photography. I hope that they know what they are doing, that film is still a niche and may only support a certain maximum price point after which very few may want to use it.’

‘Hopefully enough folks actually do stop shooting Fujifilm due to the price increases. I’d love nothing more than to actually be able to buy the stuff instead of dealing with the endless backorders.’

– But while these film enthusiasts might be at the end of their tether, Phil Gresham, whose Brisbane-based retail and online operation FotoFast specialises in film sales and D&S (Develop & Scan) told Inside Imaging that increasing film prices haven’t so far led to decreasing sales among his mainly young film customers.

‘It’s crazy but the kids are paying for it,’ he said. ‘There’s been no resistance to price so far,’ he said.

His bigger problem is supply, with the local distributors often only able to fullfill around a quarter or any given film order. When we spoke to him he had $40K of Kodak product on backorder.

As a result, FotoFast has only been retailing film across the counter rather than online, preserving it for his walk-in customers, who also tend to come back to have the film processed.

(This film supply problem might be more critical in the Australian market. Cross-checking with the giant US Adorama website, there seemed to be a lot more popular lines of film in stock. Nonetheless, of 357 film product SKUs on the Adorama website, only 196 were in stock this week. Comments on various photo enthusiast forums indicate patchy supply is chronic around the world.)

The film business is also subject to new competition for raw materials. The big one is silver itself. In 2003, the photo industry consumed around one-third of all silver used in manufacturing. That’s now under 10 percent. 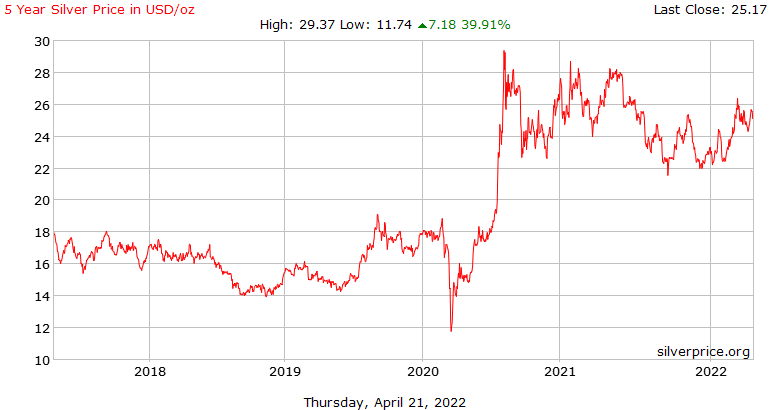 The solar panel industry is a big new competitor for silver. According to werecyclesolar.com/ ‘the average solar panel of approximately 2 square metres can use up to 20 grams of silver’. This is  a contributing factor to the big uptick in silver prices from 2020, and adds some credence to the claims from Fujifilm and Kodak that they need to increase their prices.

Industrial demand for silver is at an all-time high and, according to The Silver Institute, is likely to go even higher this year, up another 5 percent.