The Australian-based International Landscape Photographer of the Year (ILPOTY) has announced its eighth contest results, with the online chatter mostly centered on the the heavy post-processing of winning images.

ILPOTY is the brainchild of Australian landscape photographer, and post-processing maestro Peter Eastway, who is a strong proponent of the belief that all landscapes, ‘real’ and ‘imaginary’, have equal merit and should be judged on the same playing field. He’s previously engaged in debate about this topic, strongly advocating for there being no limit to the post-processing of landscapes to meet the photographer’s ‘vision’, even if it means altering a scene so it no longer truly resembles the original location.

‘So, does an imaginary photograph have an advantage over a photograph of a real landscape? Not to my mind.’ Eastway wrote back in 2014 when ILPOTY launched. ‘I really don’t care how an image is created.’ he later explained. ‘All I care about is the end result. To me a great landscape is a great landscape no matter how it was created.’

It’s a discussion that routinely crops up among landscape photographers, with some purists arguing there should be a division between realistic landscape photos that resemble a location at the moment of capture, and landscapes of the imagination, created through heavy editing.

Perhaps anticipating pushback, Eastway’s 2021 ILPOTY result announcement opens with his views on the realism vs illustration issue. (It’s worth noting this same passage was published nearly word-for-word for the 2015 contest)

‘Our philosophy is that all approaches to landscape photography are valid. It is not up to us to say whether an image is a landscape or not. As a result, in the 2021 International Landscape Photographer of the Year awards, you will see exponents of many different styles presenting their rare and carefully considered compositions. Some of the landscapes are straight out of camera, others are from the photographer’s imagination.

I find it quite compelling that what drives one landscape photographer can be so different to another. For some, the capture of nature at its most wonderful is reward enough. In fact, these are the moments photographers live for and being out in the landscape is often as enjoyable as shooting it with a camera.

However, the history of landscape art is much broader than merely creating a record of nature. It is interpretive, imaginative and inspirational. Other photographers take their captures and re-map the tonality; some take several captures to produce a landscape of the mind.’

Despite claiming ‘imaginary’ landscapes have no advantage over a ‘real’ landscapes, online photo media commenters observed that the winning ILPOTY images are mostly ‘landscapes of the mind’.

Almost 400 comments were left on the Dpreview 2021 ILPOTY gallery, a significant boost in discussion compared to the 45 comments from the 2020 contest gallery. Here are a few of the most popular (liked) comments, which indicate a consensus about how most readers regarded the results: 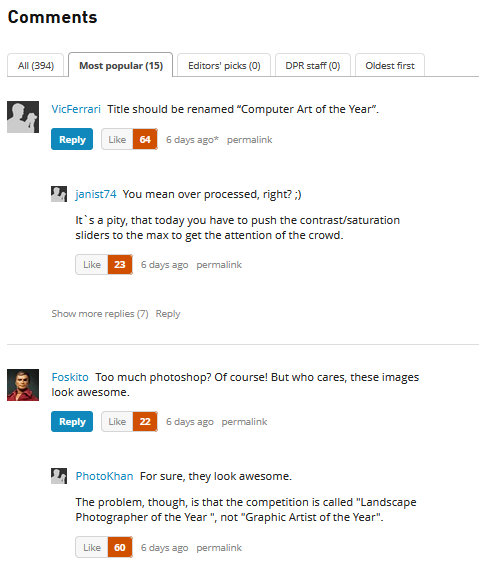 – ‘A couple of those looked fake while some others are over-processed,’ wrote user Tbcass, who received 56 likes on the comment. ‘The world of photography is going downhill fast. My opinion is they belong in a different category than landscapes. Landscapes should be more representative of reality with possibly some tweaks to jazz them up a bit. These should be called visual art, not landscapes.’

– User Phouphou: ‘Most of these look much too artificial to my eyes. No wonder since these have seen some heavy post-processing and blending. Especially Max Rive makes stunning visual art, but he is not really only a photographer anymore.’

– ‘Way too much processing,’ wrote user Einride. ‘Many of these are incredible pictures wrecked by saturation and contrast sliders into looking like digital illustrations. Also what’s up with the preference for fantasy landscapes? Fully expecting unicorns and starships to appear. Give me some Robert Adams or Rinko Kawauchi.‘

– ‘Sorry but to everyone who says “Ansel Adams also processed his photos”,’ wrote user Tailslol, ‘did you ever feel like you were looking at a cartoon when you saw an Ansel Adams photo? I personally have not. Editing is okay, making your photo not look like a photo is where I draw the line. All Ansel Adams photographs look like landscape photographs. When you look at them, you feel like you are taking a stroll in Yosemite. You don’t picture yourself in Star Wars or Lord of the Rings.

– ‘What’s the cut off between photography and digital art? I’ll admit that I like it, but sometimes the images are closer to fantasy than reality, I can’t articulate why, but at some point, visually, my brain refuses to consider it photography.‘

– And on it goes, although a few felt the contest results aren’t a big deal:

‘This type of work is not my cup of tea, but I don’t have a problem with it either. I am not a fan of heavily processed images, but if the rules of the competition allow it then what’s the issue? I only object to processing being done deceptively in an attempt to mislead the viewer.’

Over at Petapixel, it’s more of the same. The top comment by user Hector: ‘They are beautiful images but very few of them look real. They are processed within an inch of their lives. I’d really love to see the raw images in each case. Comet Neowise is very large in that image.’

Photo contest results and pics are popular on photo websites because they are a cheap source of content and often spark dialogue with and among readers. They attract feisty (anonymous) comments disagreeing with the ‘expert’ judges’ decisions. Contests are wonderfully subjective, making them a hotbed for some people to share dissenting opinions and jump at the opportunity to discuss or trade barbs. Rarely, however, is there such an overwhelming majority in furious agreement that the judges were simply wrong.  It shows a clear disconnect with a large swathe of photo enthusiasts.

ILPOTY’s judging panel has since 2016 included the same five judges: David Burnett,  Jim Goldstein, Kaye Davis, Tim Parkin and Peter Eastway, along with a guest judge. Looking back at previous winners, the contest consistently favours fantastical imaginary landscapes – perhaps a symptom of having the same five judges, along with inviting the previous year’s winner.

This year many felt compelled to speak up about the bias towards imagined landscapes, and an apparent lack of style diversity in the winning images. Despite Eastway stating in 2014 that ‘in many ways I thought the debate had passed’ about making a distinction between ‘real’ and ‘imaginary’ landscapes, it seems the consensus has not followed him when it comes to ILPOTY.

UPDATE: …And it turns out we aren’t Robinson Crusoe in reporting on the Peter Eastway-run International Photographer of the Year’s inclination towards ‘landscapes of the mind’: https://www.thephoblographer.com/2022/02/11/my-problem-with-the-international-landscape-photographer-of-the-year/

Cetin’s four winning images are moody mountain landscapes, with a photo of the Cappadocian mountains in Turkey possessing a surreal, fantasty-like quality.

‘The 60-million-year-old story of fairy chimneys and the fact they have been home to different civilisations for tens of thousands of years, makes Cappadocia extremely mysterious for me,’ Cetin writes in the online 2021 ILPOTY flip-book. ‘If you are lucky, you can visit there during hazy, atmospheric conditions with a soft light pushing through at sunrise or sunset.’

Rive’s photos look like illustrations from a fantasy novel, with surreal light and cold fog wrapping around mountains having a strong resemblance to the dramatic paintings by cult television painting instructor, Bob Ross.

Other winners, such as Photo of the Year award winner, Tanmay Sapkal, also create landscape photo illustration. Sapkal explains his award-winning photo was captured with two exposures. One to capture the ‘right amount of fog on the hills to create the dreamy setting’, and another afterwards when cars drove by to ‘create a blanket of light under the fog’.