WHAT’S THE DEAL WITH: Yongnuo lenses?

Despite kicking around for over a decade Chinese manufacturer, Yongnuo, is a bit of a dark horse in the photo industry. After starting out as an obscure eBay-based photographic lighting brand, Yongnuo is now a leading trigger manufacturer and has its sights set on the third-party lens market. In seven years, it has built up a solid line up of affordable ‘copycat’ prime lenses for Canon EF and now RF, Nikon F, Sony E, and M43 cameras.

Yongnuo lenses are alarmingly cheap – probably the cheapest on the market – yet the brand doesn’t garner much media interest, particularly from expert reviewers. Inside Imaging struggled to find any quality online written reviews from the typical channels.

And it’s not as some insight into Yongnuo wouldn’t attract interest. Australian-based educator and popular YouTuber, Paul Farris from Photo Genius, noted that his audience is constantly asking him about the quality of Yongnuo lenses. A comparison video he made between the Canon EF 50mm f1.8 ‘nifty fifty’ and Yongnuo’s copycat version has received over 123,000 views.

It’s unclear why there’s no curiosity about Yongnuo. It may have something to do with the Chinese brand’s association with terms like ‘copycat’, ‘knock off’, ‘clone’, ‘reverse engineering’ and of course ‘cheap’. Having a Yongnuo lens review alongside the likes of Canon, Nikon, and Sony may not score brownie points with the big (advertsising) brands, or their loyalists who make up a large chunk of the lens review audience.

But ethical dilemmas aside, if Yongnuo gear is that bad, instead of ignoring its existence, perhaps it’s worthwhile informing – or warning – unsuspecting photography enthusiasts trying to stretch their budget.

Or maybe its just that the marketing department of Yongnuo and whatever international distribution network it has are a bit of a fail, and haven’t ‘reached out’ to the photo media. This is by way of saying that our attempt to collate Yongnuo lens reviews was somewhat unsuccessful.

It goes on like this, with prices typically under half of the big brands. But it does appear that ‘you get what you pay for’, ‘if it looks to good to be true, it probably is’, etc, etc. There are other sound reasons to be wary of Yongnuo beyond build and optical quality. Refunds and service under warranty may not be honoured or more difficult to attain, and many may consider it ethical to support local specialist retailers, and buy a lens built by a company with an innovative R&D department.

To eBay and beyond

Yongnuo was established in 2006, and has its headquarters in Shenzhen, China. According to Chinese wholesale e-commerce platform, Alibaba, where Yongnuo connects with importers, the manufacturer employs between 500 to 1000 people and its total annual revenue is between US$50-100 million. It’s main market outside China is North America, accounting for 10 percent, followed by Western Europe and Eastern Asia, both at eight percent.

Yongnuo first came on Inside Imaging‘s radar back in 2014, when US-based radio trigger manufacturer, PocketWizard, attributed 20 redundancies to poor sales, changing customer behaviour, and increased competition. Reading between the lines, it was clear PocketWizard could have heaped the blame on Yongnuo, which had converted many customers in the flash trigger market.

At the time four Yongnuo wireless triggers cost $120, while a single PocketWizard was closer to $250. The response to PocketWizard’s financial woes from photographers – seasoned professionals to hobbyists – was unsympathetic: ‘They enjoyed their market dominance and seem to have driven it till the wheels fell off’, and ‘you can only live off reputation for so long when your product isn’t actually better than the competition’.

While triggers are vital tools for some photographers, they’re not overly exciting products that elicit feverish brand loyalty. Yongnuo undercut a market that was bloated with margin and ripe for the taking. But lenses are a different story.

When Yongnuo pulled back the curtains in 2014 on its first prime lens, the nifty-fifty rip off, the announcement was met with a healthy dose of cynicism.

‘I am curious to test this lens for sure, but I am not going to praise this as an achievement or anything given it appears to be a complete ripoff of the Canon,’ wrote Anthony Thurston for SLR Lounge in 2014. ‘I am curious what Canon will do, if anything, about this. It’s one thing to clone a speedlight, but a lens, surely that is not something they will be happy about.’

With apparently no IP lawsuits getting in the way, Yongnuo has since released many more prime lenses. Focal lengths from 14mm to 100mm are covered for EF and Nikon F mounts. Lenses are now also available in Canon RF, Sony E, and M43 mounts, and some Australian specialist retailers like Ted’s and Vanbar sell them. 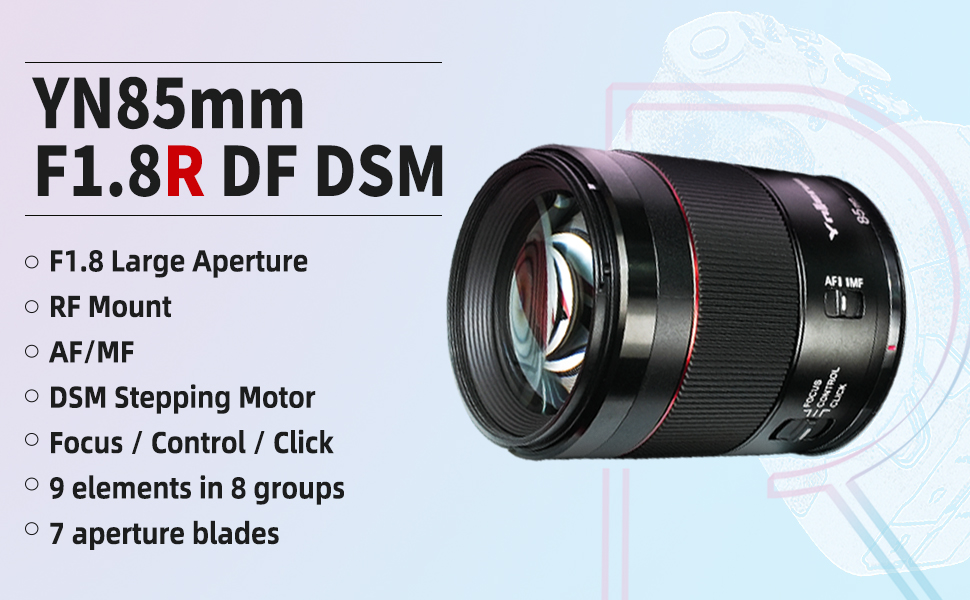 How do Yongnuo’s lenses stack up?

It’s a hard question to answer given the aforementioned lack of expert reviews. On paper, Yongnuo’s lenses match the competition’s specs – which is kind of the point of a ‘clone’!

The few available independent reviews are interested in the YN50mm f1.8. Paul from Photo Genius compared it with the Canon EF nifty fifty, and found the optical performance was pretty much line-ball in mediocrity. Both lenses performed poorly wide open.

‘The Yongnuo lens with its aperture F1.8 wide open – I couldn’t get a single sharp image out of this lens,’ he said. ‘I tried, but it just didn’t happen. Closing the aperture down, a nice sweet spot is about 2.5 to 2.8 which is still nice and wide, making it a usable lens.’

Likewise, the Canon was ‘very soft when it’s wide open. So really both lenses didn’t perform at its maximum aperture’.

Autofocus is where Canon’s Stepping Motor technology clearly has the edge on Yongnuo’s AF system, which Paul described as ‘appalling’ due to it being ‘clunky, noisy, and tracking poorly’.

Photography YouTuber, Christopher Frost, tested the Yongnuo 50mm f1.8 S DA DSM for Sony APSC E-mount. He found the optical performance was ‘averagely good in most ways’, and the autofocus was ‘quite quick’ despite ‘briefly hunting’ before locking onto a target. The AF could be ‘a bit unsure of itself’ in the fastest mode, and made a quiet whirring noise. But, overall, he concluded that for a lens with autofocus its ‘great value for money’.

More discussion about Yongnuo lenses can be found on photography forums. It can make more entertaining reading, with one DPReview commenter stating the YN50mm f1.8 for Nikon F ‘was the only lens I ever threw in the trash among dozens owned. It had an almost diabolical penchant for surprising me with out of focus images at a 50 percent rate’.

It’s anyone’s guess where Yongnuo goes from here. Like fellow Chinese manufacturers, it’s relatively young company that has kinda, sorta, made its mark. It may go on to become not only accepted, but a respected brand in the photo industry. This will require shaking off the ‘copycat’ perception. Or it could just keep knocking out cheap knock-offs. Or its cheap knock offs might improve in optical quality, build, and autofocus performance. Whatever happens, it’s likely to be part of the global photo ecosystem into the future.

This article is the first in a series exploring the various weird and wonderful third-party photography gear manufacturers.