WHAT’S THE DEAL WITH: Samyang lenses?

Samyang, a third-party South Korean lens manufacturer of affordable lenses, has come into its own in the last decade, characterised by expansion into new global markets while extending its lens range to most camera mounts.

Based on Samyang’s recent emergence, a casual observer would be forgiven for assuming the company launched sometime after the digital photography revolution, along with the cohort of cheap third-party lens manufacturers like Yongnuo, Laowa, or Meike.

Despite kicking around since 1972, Samyang didn’t become a familiar brand name to photographers until around 2013, after ramping up lens production from its headquarters in South Korea. Although it wasn’t a great start. The products were marred with quality issues, and until 2013 the Australian distribution was handled by a bloke in Queensland operating out of his garage.

Australian distributor, Maxxum, then acquired the local supply of Samyang, assisting the company to climb out of what was literally a garage operation and into a more professional and credible environment locally.

‘Back then Samyang had a few issues with quality, but they’ve improved out of sight going forward,’ explained Maxxum director and co-founder, Glenn Ward, to Inside Imaging. ‘Some new management came in and things kept getting better each year, and so it was a really great pick up [for Maxxum]. All those quality issues are gone now, and I’d dare say Samyang is right up there with some of the big brands. In terms of return rates, it’s really low – less than one percent.’

Dig into the internet archives and it’s clear Glenn isn’t kidding about quality issues. In a 2017 YouTube review for NatureTTL, US photographer Matthew Saville covers just how poorly designed the popular and now-outdated 14mm f2.8 lens was.

‘This 14mm is just not good at living a long, healthy life,’ he said. ‘First of all, right out of the box, between my friends and I, I’ve lost count of how many bad lenses that were not sharp. Right out of the box, and we had to send it back and get a new one. Then, after years of abuse, I’ve also lost count of – or at least it has been three, four, or five copies of this lens that have gone soft at the edges, which is caused by something caused de-centering or other optical alignment issues’.

After trawling through more recent reviews of newer lenses, and based on Maxxum’s low return rate, these quality issues don’t seem to crop up any more.

Samyang lenses – available for Canon EF, Nikon F and Z, Sony E and A, Fujifilm X, Pentax K, M43 and even Samsung NX! – occupies a unique position in the market. It’s balanced decent quality optics with affordability, with most products manual focus prime lenses with no moving parts or electronic connection. On a spectrum of third-party lens manufacturers, with Yongnuo at the low end of the scale and Sigma and Tamron at the high end, Samyang would likely sit in the middle.

Having announced its first autofocus lenses in 2016, a pair of Sony E-mount full-frame prime lenses, Samyang appears to be moving ambitiously toward higher quality optics with moving parts and electronic contact. It’s worth noting that most of Samyang’s autofocus lenses are available for Sony, with 12 lenses spanning focal lengths from 12mm to 85mm. Canon EF and Nikon F are the only other mounts with autofocus capability, and even then there are only two products available. 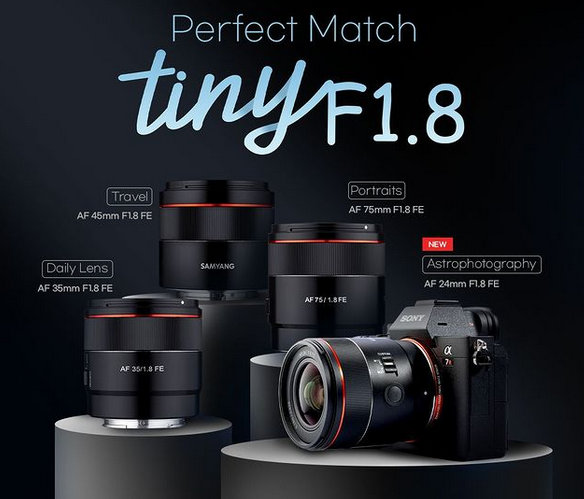 A commitment to the E-mount is a combined effort by both Samyang and Sony. Unlike Canon and Nikon, Sony’s strategy to build the E-mount lens line up is via sharing the mount design details, allowing third-party manufacturers to build more advanced lens technology. While this cuts into Sony’s profit margin by increasing competition, it has allowed Sony to offer a diverse E-mount lens range from a standing start a few years ago.

Samyang took its own risk with Sony, as back in 2016 the Japanese electronics company was yet to establish a significant market share.

‘Samyang read the tea leaves really well – Sony is now a top brand and make some fantastic gear,’ Glenn said. ‘But it’s not cheap. And when the first a7 came out with FE lenses, there wasn’t an affordable option out there. To my knowledge, Samyang was one of the first second-tier manufacturers to produce full-frame lenses for Sony cameras. And when there are these additional cheaper lenses, people start paying more attention.’

Another welcome strategy in Samyang’s business model is to develop lenses for mounts beyond the ‘big three’, to the likes of Fujifilm and Pentax. Glenn said this has paid off, as the 12mm f2 lens for the Fujifilm APS-C X-mount cameras is a top seller.

‘Samyang is still considered entry level or budget. If you look at some of our lenses that are out there on the market, a Sony autofocus lens for instance, is either half or a third cheaper than the Sony product.’

There are a few quirks with Samyang that confuse things. The big one is that overseas, particularly in the US, the brand is known as Rokinon, as well as Bower and Vivitar. While Rokinon is a separate brand to Samyang, it’s simply re-badging Samyang lenses with private labelling. In Australia it’s just Samyang.

WHAT’S THE DEAL WITH: Yongnuo lenses?

But… Are they any good?

By far the best-selling lens in Australia, and around the world, is the manual focus 14mm f2.8 for Canon EF cameras. Last year the lens was upgraded to a Mk II, which features the same optical design with build quality improvements including weather sealing around the mount.

Samyang again embraces complexity in its line-up, as this lens comes in two manual focus versions, and there is also the AF version for Sony E, Canon EF, and Nikon F.

But wait, there’s more! Samyang also has a line of ‘Premium Manual Focus’ lenses, which includes a 14mm f2.4 – a better and more expensive version of the 2.8. But for the sake of keeping it simple, we’ll focus on the best-selling 14mm f2.8.

Of the two current Canon EF versions, one is priced at around $650 and includes no moving parts, while the other is $750 and has an aperture control motor, CPU chip, and electronic contact allowing photographers to use Auto Exposure (AE), as well as anti-reflective coating.

Pouring through various user and expert reviews, the consensus on the various iterations of the 14mm f2.8 lens is it produces good quality results and represents value for money. It’s ideal for landscape photography, and particularly cherished among astro photographers. The predominant criticism is the build quality, with some photographers unsatisfied with the weather sealing and plastic-y feel, as well as photos showing distortion and vignetting.

Australian photography magazine, PhotoReview, gave the 14mm f2.8 manual focus lens an 8.8 out of 10, describing it as ideal for ‘cash-strapped amateur and professional photographers who have enough knowledge to work with its limitations: manual focus, no stabilisation and noticeable barrel distortion’.

‘If you can live with the inherent distortion and the lack of autofocusing, the Samyang 14mm f2.8 lens provides by far the cheapest way to get a really wide-angle lens that can produce sharp images,’ writes Margaret Brown for PhotoReview. ‘It’s roughly 1/5 of the price of Canon and Nikon 14mm f2.8 lenses and roughly one third of the price of Sony’s closest equivalent: a 16mm f2.8 that sells for $1299.’

ePhotoZine‘s John Riley wrote in 2020 that on an EOS 5DS R the lens has ‘impressive performance and offers ‘fantastic value’.

‘The Samyang MF 14mm f2.8 MK2 can be tough to focus using an optical viewfinder but is saved by extensive depth of field, and excellent and accurate focus if using Live View,’ writes Riley. ‘The lens is weather-sealed, which is almost a requirement these days, and gives impressive optical performance in terms of sharpness in particular. The end results are fantastic and using the hyperfocal distance technique there is almost no need to focus, which goes some way to offset any difficulty finding the focus point. It’s a great lens overall, but some may find the handling a bit on the slow side. ‘

Phoblographer editor and founder, Chris Gampat, was ‘pretty torn’ on the lens and had a slightly more critical conclusion.

‘You get good sharpness with excellent colors and character at an affordable price point. But it’s 2020, and they need to step it up. I’m perfectly fine with manual focus lenses. But give us weather sealing in each and every lens. Also, provide us with autofocus contacts on all the lenses. That’s the most frustrating part about these lenses. Otherwise, it makes getting the perfect photo a bit too difficult.’

As noted by Glenn, Samyang has come a long way in a relatively short period of time. If it continues in its current projection, it may edge along that quality spectrum toward the likes of Sigma and Tamron, and further away from the cheap Chinese lenses. But there is a way to go, yet.