WA surf photographer, Brad Masters, has died after developing a ‘freak neck infection’ in Bali in late December, which worsened and spread despite attempts to treat his illness. 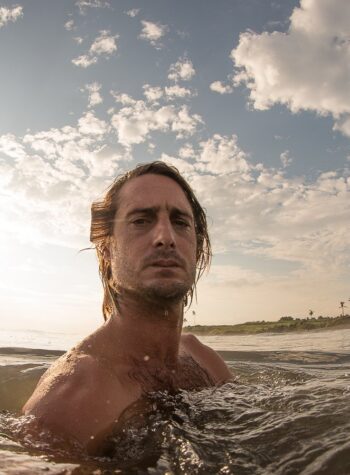 Masters, who lived in Canggu, Bali, worked as both a photographer and fitness instructor. During his time behind the lens he captured iconic surf photos, mostly water angles, of professional surfers and lifestyle pictures in exotic locations around the world.

‘Travelling around the world chasing waves is definitely one of the best parts of my job,’ Masters wrote in his bio. ‘I like to shoot images through my eyes and create something different out of it. Surf photography is a very tricky business to be in with so many guys calling themselves photographers today but a little competition never hurt anyone. The best way to sum up being a surf photographer for me is surfing is my life and shooting photos is my passion.’

The 41-year-old was fit and healthy. On Christmas day, he was admitted to a Balinese hospital after complaining about a swollen neck gland, which became scarlet and ballooned larger than his head. Over four weeks surgeons performed two major operations but failed to remove the infection, and his antibiotics were constantly changed as the infection spread. Masters then caught a ‘superbug’ that entered his lungs, giving him pneumonia, and the photographer was placed in an induced coma.

The family set up a GoFundMe campaign to assist with the medical expenses, which weren’t covered by insurance.

‘As you could imagine, the financial stress on Brad’s family is enormous due to the insurance company rejecting the claim,’ the GoFundMe page stated. ‘The medical cost for his treatment is in excess of $75,000 and increasing daily by $3500 as Brad needs to be in ICU possibly for a further month on a mechanical ventilator.

‘One suggestion was that they medevac Brad back home to Australia but this is far beyond their financial capability. Owing to the Covid pandemic restrictions they are unable to be by his side, which is difficult for any family or friends to support him, as he is in permanent isolation. We are all praying in the hope he has the will to fight and return to a healthy state.’

The GoFundMe campaign raised $37,000, Masters was flown home to Perth on February 2, and he sadly passed away on February 6 surrounded by his family.