A photojournalist is attempting to re-unite over 300 vintage photographs from Japan, dating from the 1930s-1960s, with their rightful owner after discovering them at a market in regional Victoria. 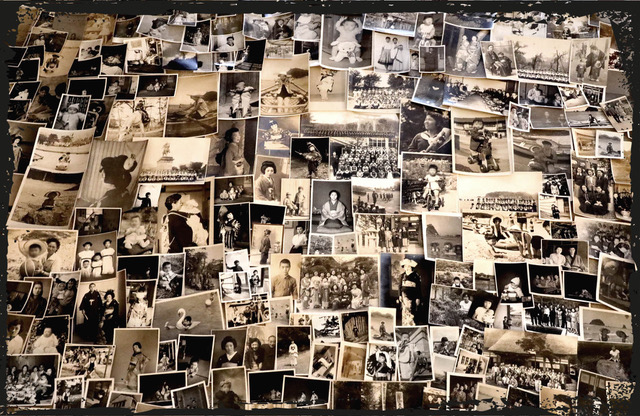 Sydney-based photographer, Mayu Kanamori, was holidaying in Daylesford, Victoria in 2015 when she found the collection of black-and-white photographic prints in plastic bags at a trash-and-treasure retailer, The Amazing Mill Market. The photos were captured in Japan, and featured only Japanese people.

‘Most were taken in the 1950’s and 60s but others were much older, including those of men in military uniforms from WWII, and some portraits from the 1930s or earlier,’ Kanamori writes in a blog post. ‘The same people appeared in different situations, giving the impression they were from one family.

‘Some featured workers from a film studio in Kyoto where director Akira Kurosawa’s famous film Rashomon was shot in the early 1950s. There was writing on the back of some of the prints, along with a few letters and postcards written in Japanese and official documents such as school identification cards and pay slips.’

The only information the stallholder could provide was that the pictures came from a deceased estate in Geelong, Victoria.

Kanamori was born in Japan, and her work frequently explores the Japanese-Australian migrant experience. The pictures came into her possession by sheer co-incidence. Yet it’s an almost fateful pairing as revealing the story behind these pictures – how they found their way to a working class regional Victorian city – is the kind-of project that fascinates the photographer.

And with that Kanamori launched Untitled.Showa, a project aiming to display the pictures to audiences across Australia and Japan in an effort to shed more light on them. Some of the subjects in the photos are children, and Kanamori speculates they’re likely still alive.

During last year’s lockdown, she began sorting through the images and tackled the tedious task of digitising them. Rather than using a flatbed scanner, she photographed the images and then post-processed them individually.

With the help of designer and web developer, Chie Muraoka, the team built a English/Japanese bi-lingual website to showcase the images. Esteemed photography curator, Sandy Edwards, came onboard as the art director to organise workshops and exhibitions. An exhibition is currently showing in Sydney, presented by 107 Projects, with more events upcoming in Geelong and Kyoto this year.

Edwards is curious about being part of a project with no known outcome.

‘It places more emphasis on the process, which for Mayu is a collective historical experience,’ said Edwards to SBS Japanese.’It shines a light on her true interest (apart from the power of photography) which is to tell stories about the interconnections between Japanese and Australian histories. She places herself as an ambassador of sorts, in the responsible position of understanding, interpreting and telling those histories.’

Kanamori also told SBS Japan that even though the goal is to unearth the story behind the images and ideally repatriate them, Untitled.Showa is adding yet another layer of narrative.

‘As much as it is important to find the link between the photos and Geelong, the story in itself is being written as we speak. It is our job to make it a happy story. I believe that the present can change the future and the past and that the steps we take today can change the direction this project”

Untitled.Showa received government funding through the Australia-Japan Foundation of the Department of Foreign Affairs and Trade.