Rumours of forthcoming new camera releases are going round and around on the various rumour and content mustering websites at the moment.

Perhaps the most reliable – mainly because it comes with a picture – is talk of a new compact cine camera from Sony, the FX3 ‘Cinema Line’. 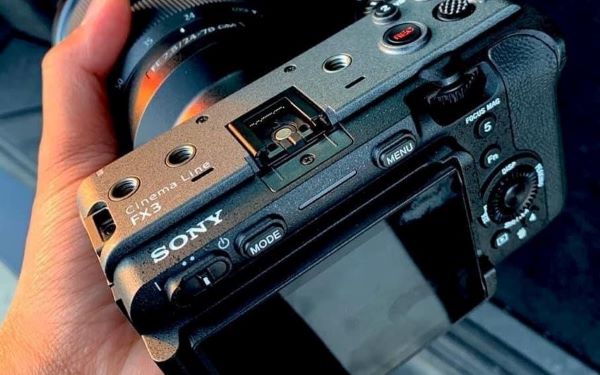 Little detail is available. It’s bloody expensive if the rumoured price of 3795 Euros (around $6000) is correct. Some say 8K, some say 4K up to 120fps. Body seems based on the Sony 6600. There are three tripod screws on the top plate and a dedicated record button. LCD screen is articulated. Possible announcement at CP+, which has been postponed to Feb 25-28.

He tips the camera will be released around the middle of the year.

Sigma also finds itself in the rumour mill, with an upgrade to its fp, designated the Sigma fp L. The fp is the smallest and lightest full-frame mirrorless camera on the market. There’s some speculation the new camera will have a higher resolution sensor than the 25-megapixel unit on the current model, which wouldn’t be unreasonable. A fp-style camera running a Foveon sensor would be interesting. Sigma has also registered a new external viewfinder – the fp doesn’t come with a built-in viewfinder. Another CP+ announcement?

While there are no rumours of new cameras from OM Digital Solutions, there’s a fair bit of noise. It seems that in the absence of actual product development, the new entity which has assumed ownership of the Olympus camera business will just keep bigging itself up so it doesn’t lose relevance.

In  an interview with asahi.com the chief technology officer said that everything is going to be wonderful, that OM will stick with M4/3 format and that in about a year’s time they will release a product which will make everybody go ‘Wow’.

He was wearing a beautiful suit made with the finest silk, sewed together with golden thread and hand-made by the best tailors the world has ever seen.