SONY FE f2.8 PRIMES: Back in late March, Sony unveiled a trio of compact prime lenses that were similar in size and design and notable for their light weight and weather-resistant sealing. They are designed to deliver high resolution and sharpness through comprehensive correction of common aberrations. Performance-wise the FE 50mm f/2.5 G is the pick of the trio but the other two lenses aren’t far behind.
RRP: 40mm $999; 50mm and 24mm $899 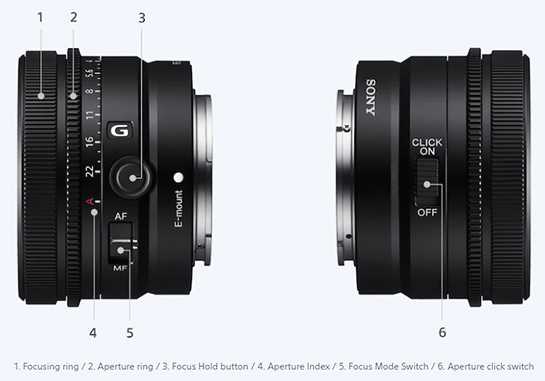 The three lenses were the FE 24mm f/2.8 G (SEL24F28G), FE 40mm f/2.5 G (SEL40F25G) and FE 50mm f/2.5 G (SEL50F25G), spanning a modest angle-of-view range from moderate wide angle to standard perspective. All three lenses have been made mainly from aluminium alloy to keep weight down and all three are light enough to be used on drones or gimbals. Build quality is sound across all three lenses, including dust- and moisture-resistant seals,  with fluorine coatings on the front elements to repel water, dust and grease so they’re easy to keep clean. They also feature de-clickable aperture rings for video use, an AF/MF switch on the lens barrel and a focus hold button that gives rapid access to focus mode settings. 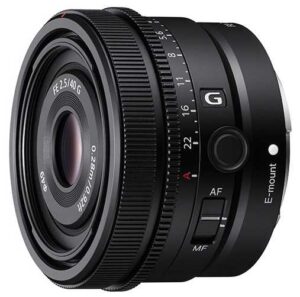 All three lenses are supplied with specially-designed hoods, with the ALC-SH166 lens hood bundled with the 40mm and 50mm lenses featuring an innovative, inwards-curving design that works well but can’t be reversed over the lens barrel. However, it is small enough for this not to matter when the lens is carried or stored. All three lenses accept 49 mm filters.

Performance-wise the FE 50mm f/2.5 G is the pick of the trio but the other two lenses aren’t far behind. The 50mm lens is also a tad more versatile because it replicates the perspective of normal human vision. It’s not the cheapest Sony 50mm lens; that honour goes to the FE 50mm f/1.8 lens, which dates back to 2016. But it’s 12 grams lighter and has a more up-to-date and sophisticated design.

The optical structures of all three lenses are relatively simple, with the 24mm lens having eight elements in seven groups and the other two nine elements in total. The 24mm and 50mm lenses include an extra-low dispersion element with two aspherical elements, while the 40mm lens has three aspherical elements. In each case, the effect is to reduce a variety of aberrations and suppress colour fringing and distortion. Balancing the optics is an XD Linear Motor system that uses two separate focusing motors and is fast, accurate and quiet enough for use when shooting video. Focusing is fully internal and electronically driven but manual over-ride is possible via the on-lens switch.

Purchasing Points:
1. The small size, light weight and environmental sealing are the key features of all three lenses, making them ideal for outdoor use in moderately challenging conditions. They also represent good choices for travellers.
2. The physical controls are easy to use and provide quick access to the click/unclick switch for the aperture ring and focus mode switch as well as the programmable focus hold button.
3. As part of Sony’s G series, these lenses are designed to deliver high resolution and sharpness through comprehensive correction of common aberrations, particularly with recent models.
4. All three lenses support the focus detection and tracking modes in Sony’s recent α7 and α9 cameras.
5. These lenses can be used on Sony’s cropped-sensor α6*** cameras (but are better suited to the full frame models). 6. All three lenses can deliver attractive bokeh at wide apertures with subjects that have evenly-lit backgrounds and all three can produce 14-pointed sunstars when stopped down to f/22.