NIKON Z fc: Nikon goes retro again with the Z fc, a new APS-C Z-mount camera styled after the classic Nikon FM film SLR and offers it in five pastel colours as well as black and white. The Z fc is a marketing statement and if pastel colours and retro styling are what you want, it’ll be a good choice. Otherwise, the Nikon Z50 would be a slightly better option for most potential purchasers since it offers more comfortable handling and includes a built-in flash. Unfortunately, there currently aren’t many dedicated lenses for the Z-mount cropped sensor format.
RRP: $1449 (body only)

Announced on 29 June, 2020 the Z fc is Nikon’s second attempt at a retro-styled digital camera, the first being the somewhat unsuccessful Df DSLR announced in late 2013. The new model has a better chance of success than the largely unloved Df since it uses the same 20.9-megapixel BSI-CMOS sensor and EXPEED 6 processor as the Z50, a tried-and-proven combo.

Interestingly, it’s also targeted at ‘vloggers’, which will split the potential market. Both cameras are hampered
by the paucity of Z-mount DX Nikkor lenses; comprising only two out of a total of 19 Z-mount lenses and two teleconverters.

Stylistically, the Z fc has a lightweight magnesium alloy body with dial controls on the top panel for adjusting ISO, shutter speeds and exposure compensation. It’s a nice feature but not well implemented as there’s no auto setting on the ISO dial and the shutter speed dial stops at four seconds, even though the camera can record 900-second exposures. (Slower speeds must be set through a combination of the camera menu and dial setting; not really intuitive for novice users).

The flat-fronted ‘bar of soap’ styling is also less comfortable to handle than the Z50 – and the Z fc lacks that camera’s pop-up flash. On the plus side, its monitor is fully-articulated instead of tilting, like the Z50’s screen.

Aspect ratios are not widely selectable in either camera so users are stuck with 3:2, 16:9 and 1:1 for stills and 16:9 for movies despite the EVF having a totally different 4:3 aspect ratio. Neither camera has a headphone jack, which is a feature many vloggers will require, although both cameras include microphone ports. They also offer UHD 4K video at 25 fps but limit movie clips to less than 30 minutes. Slow-motion recordings are limited to three minutes.

The Z fc uses the same battery as the Z50 but offers slightly lower shooting capacity. However, users can charge the battery via a USB Type C cable and firmware updates can be installed from a smartphone using the SnapBridge app (V. 2.8), a new capability for a Nikon camera. 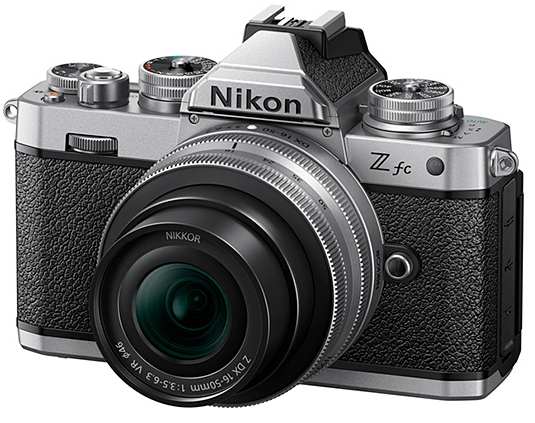 Selling Points:
1. Essentially, the Z fc is a marketing statement, with retro styling and the option of a pastel coloured body plus a fully-articulating monitor distinguishing it from the otherwise almost identically featured Nikon Z50.
2. Aluminium dials provide direct access to ISO, shutter speed and exposure compensation adjustments, allowing settings to be changed quickly and easily. The ISO and shutter speed dials have locking buttons to prevent accidental re-setting.
3. The hybrid phase- and contrast-detection AF system has a range of -4.5 to +19 EV and 209 selectable focus points. Autofocus selections include face and eye detection and tracking for human and animal subjects.
4. Like other Nikon cameras, users of the Z fc can choose between 12-bit and 14-bit raw files but there’s no option to select compressed, losslessly compressed or uncompressed recording.
5. The Z fc’s maximum continuous shooting rate is 11 frames/second for JPEGs and NEF.RAW files. The buffer memory can accommodate up to 83 Large/Fine JPEGS or 100 JPEG frames at smaller sizes and higher compressions. Raw file capacities are 44 frames for 12-bit files or 36 frames for 14-bit files.
6. The articulating monitor can be turned to face forwards for selfies and vlogging. In this position, the camera automatically switches to self-portrait mode without affecting the touch control interface. A nice touch!
7. The Z fc supports 4K video recording without frame cropping but frame rates are limited to 30 fps (NTSC) or 25 fps for PAL format users. Clip lengths are limited to 29 minutes and 59 seconds for all resolutions at regular frame rates with slow-motion recordings limited to three minutes.
8. Focus peaking and zebra displays are available for monitoring focus and exposure levels while shooting video.
9. A microphone jack is provided (but not a headphone jack) and video can be recorded directly to an external recording device or fed to a TV set via the HDMI connector.
10. Time-lapse movie recording is available and users can set the start time, interval between shots and duration of recording. Silent shooting and exposure smoothing are also available, and users can select the frame size and rate for playing the resulting video.