NIKKOR Z 24-50MM F/4-6.3: A retracting 2x zoom lens for Nikon’s Z-mount mirrorless cameras that delivers good imaging performance for an affordable price. On the plus side of the equation are the small size and light weight of the lens, coupled with above-average imaging and AF performance. On the negative side are its plastic construction, coupled with relatively slow maximum aperture and zoom ranges.
RRP: $799 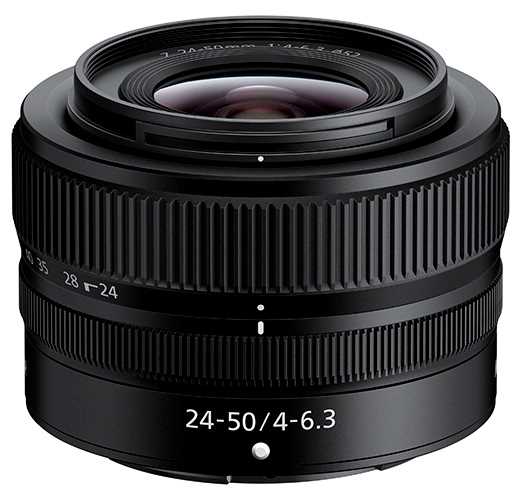 Designed primarily as a kit lens for bundling with the Z5 body, the Nikkor Z 24-50mm f/4-6.3 is the smallest mid-range zoom lens so far for full-frame cameras in the Nikkor Z range. Made almost entirely from composite plastic and with a retracting barrel, it lacks weatherproofing and built-in stabilisation but weighs only 195 grams and offers fast and accurate autofocusing while delivering surprisingly good image quality. Build quality is a little better than you’d expect for a budget lens. When the lens is collapsed it only protrudes 110 mm, making it good for travelling photographers with little space in their camera bags. Although its zoom range is relatively short, this lens works well for popular genres like landscape and street photography.

However, the relatively slow maximum apertures across the zoom range and the minimal focusing distance of 35cm make it difficult to obtain images with pleasing bokeh. Fortunately, it’s surprisingly flare resistant, thanks to Nikon’s standard Super Integrated Coating, although since no lenshood is supplied, the optional HB-98 (or one of several compatible third-party hoods) is recommended. Retracting lenses tend to be slow to get started; the zoom ring must be rotated to the 24mm before pictures can be taken (the camera will post an alert to this effect). Zooming to 50mm requires just under a quarter of a turn, which changes the maximum and minimum apertures from f/4 and f/6.3 for the former and f/22 and f/36 for the latter.

The only other control surface is the control ring, which is set by default for manual focus adjustments. Alternatively, it can be programmed to adjust aperture, exposure or ISO sensitivity via the camera’s Custom menu. Autofocusing is driven by a stepping motor, which is controlled from the camera and drives an internal element group. Manual focus over-ride is available in AF mode. Autofocusing performance, which is influenced by the algorithms in the camera, was generally excellent.

Our Imatest tests showed the review lens delivered better than expected resolution for a relatively inexpensive kit lens, although overall performance was a little patchy. Centre sharpness remained relatively high right up to f16 at all focal lengths and edge softening was less than expected. Common flaws like chromatic aberration, distortion and vignetting are corrected automatically in Nikon cameras when JPEGs are recorded, and easy to correct in Raw files.

Purchasing Points:
1. The optical design contains 11 elements in 10 groups and includes three aspherical and two ED (extra-low dispersion) elements. The largest element bulges outwards at the rear, where it’s protected by being inside the camera during use.
2. Key factors that advantage the 24-50mm lens over the faster 24-70mm lens – which is also offered as a kit lens with both generations of the Z6 and Z7 cameras – are its compact size, lighter weight and more affordable price tag. 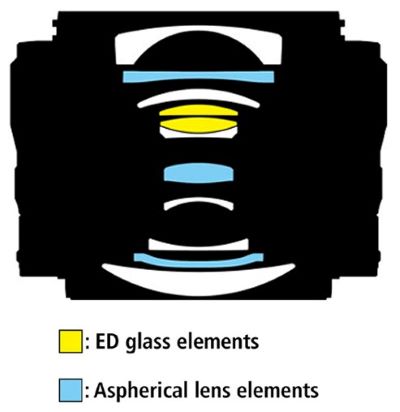 3. Nikon’s published MTF ratings suggest this lens performs better on its sagittal axis than the meridional, but is generally good for a kit zoom lens. Our tests confirm these suggestions.
4. There are no depth-of-field or distance scales, neither of which is common on budget lenses. The lens will focus to within 35cm of subjects, giving a maximum magnification of 0.17 x at the 50mm focal length. This is not really close enough for shooting very small objects but usable with flowers and other objects that are larger than, say, a smartphone.
5. This lens accepts 52mm diameter filters and can be used with graduates and polarisers without requiring adjustments when focusing and/or zooming. Internal focusing is driven by a stepping motor, which is very quiet – but not entirely silent.
6. The control ring, a characteristic of Z-mount Nikkor lenses, can be assigned to operate functions like aperture exposure compensation and ISO sensitivity settings. Its default setting is for focusing adjustments.
7. The review lens was moderately flare-resistant, although not entirely flare-free. Common faults like chromatic aberration, vignetting and distortion are corrected automatically in JPEGs recorded by Nikon cameras as well as in most raw file converters.
8. Potential purchasers should balance the low price, small size and light weight of the lens against its plastic construction, slow maximum apertures and limited zoom range. Moving up to the Nikkor Z 24-70mm f/4 S (which is also retractable) could be an option for some potential buyers.

For a more comprehensive review, including bench-test charts click here