FUJINON GF 63MM F/2.8 R WR: The standard prime lens for Fujifilm’s medium format cameras is compact, capable and competitively-priced. It’s fast enough to be used hand-held in a wide variety of situations, and it’s a nice lens to use. Autofocusing is fast enough for most usage and quiet enough for stills shooting. Videographers may find it a bit on the noisy side without an external microphone.
RRP: $2399 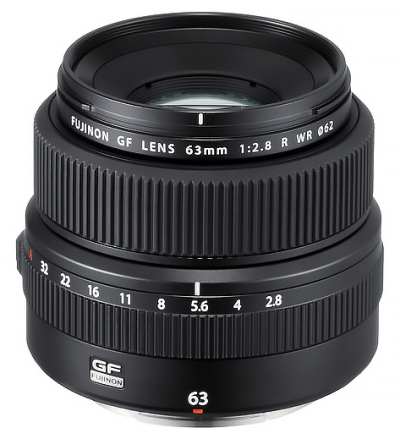 The Fujinon GF 63mm f/2.8 R WR is the first – and, so far, only – standard prime lens to be produced for Fujifilm’s medium format range, although some of the zoom lenses cover this focal length. Its optical design consists of 10 elements in eight groups and includes one extra-low dispersion element to suppress chromatic aberrations and coloured fringing.

The lens boasts excellent clarity and colour accuracy across its aperture range. A dust-, freeze- and weather-resistant construction, along with a fluorine coating on the front element of the lens to repel dust, moisture and grease, makes this lens ideal for location work. The rounded nine-blade iris diaphragm helps to ensure a pleasing bokeh quality and produces sharp 18-pointed sun stars when bright light sources are photographed at the minimum aperture of f/32.

Because ‘standard’ lenses have always formed the basis of a serious photographer’s kit, this lens is versatile enough to be used for landscape photography as well as reportage, environmental portraits and certain types of event and documentary photography. When fitted to the relatively inconspicuous GFX50S Mark II or GFX 100S cameras, it can also be used for street photography.

Manufactured in Japan, the GF 63mm f/2.8 R WR lens is solidly constructed with a brass mount for additional strength and a manual aperture ring designed for intuitive, tactile adjustment. Aperture settings range in one-stop increments from f2.8 at the right hand end of the ring to f32 on the left, with unmarked 1/3EV click stops between them. Beyond the f32 position are two extra marks, an ‘A’ position for selecting auto aperture and a ‘C’ position that lets the user set the aperture via the camera’s command dial. The A and C positions are lockable to prevent settings from being changed inadvertently.

Performance in our Imatest tests was generally good and the lens was capable of meeting expectations for the review camera’s 51-megapixel sensor across a wide range of aperture settings from f3.8 through to between f5.6 and f6.4 when measured in the centre of the frame and roughly half way out to the edge. Edge softening was present across the aperture range, although for most aperture settings resolution was only a little below the expected level for the sensor’s pixel count. Lateral chromatic aberration was effectively negligible and only traces coloured fringing were found in test shots, most of them amplified by slight blurring at the corner of the frame.

1. Covering an angle of view equivalent to a 50mm lens in 35mm format, it is only 71mm in length and weighs just 405 grams but has a relatively fast f2.8 maximum aperture, which makes it suitable for use in low-light conditions and where depth of field control is needed.
2. Nine weather-resistant seals make it ideal for location shooting in wet, cold or dusty conditions.
3. Focusing is internal and driven by a stepping motor, which moves the front optical group. It’s fast and precise – although not quite as silent as a linear motor, making this lens better suited to shooting stills than recording video clips.
4. The minimum focus of 50cm isn’t ideal for close-ups but is fine for close-up portraits thanks to its relatively low magnification of 0.17 times life size, which minimises potential distortions.
5. The lack of built-in stabilisation means this lens is best used with cameras that include IBIS, such as the GFX 100S and GFX 50S Mark II.
6. Nine rounded iris diaphragm blades produce smooth and attractive bokeh at wide apertures, along with sharp 18-pointed sun stars when the aperture is stopped down beyond f/22. We found smooth tonal transitions in out-of-focus backgrounds in wide-aperture shots that were evenly lit and only traces of outlining in bright background highlights
7. The f2.8 maximum aperture creates a shallow enough plane of focus to enable selective focusing.
8. As the most affordable lens in the medium format G-mount series, this lens is ideal for photographers buying into Fujifilm’s medium format system.
9. The lens is supplied with front and end caps, a cylindrical lens hood (which reverses over the lens) and a soft lens pouch.

For an extended review, including lens performance charts, click here.