CANON EOS R3: Announced in April 2021, Canon’s EOS R3 is the highest-featured model in the R-series and  will meet the needs of the overwhelming majority of sports photographers and many photojournalists who need to shoot professional-standard stills and video. Although its specs don’t outshine the main competitors from Nikon and Sony, which are higher in resolution, the R3 gives Canon a solid, professional-standard interim flagship for its mirrorless models and the 24-megapixel resolution is eminently suitable for this camera’s target market. Autofocus is outstanding.
RRP: $8599 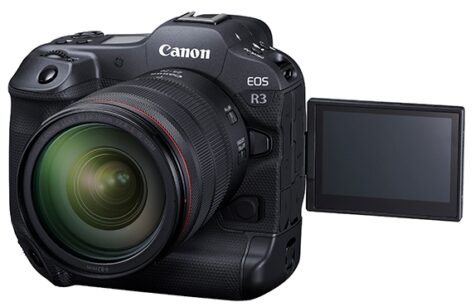 The stacked sensor design supports an electronic shutter function that can record continuously at up to 30 fps, with virtually no rolling shutter distortion. The camera’s buffer memory can store up to 150 CR3.RAW frames, up to 530 Large/Fine JPEGs or 450 HEIF images. A new HDR-PQ (High Dynamic Range – Perceptual Quantisation) recording mode with 10-bit colour depth is available in CR3.RAW or HEIF format, enabling the R3 to capture a dynamic range that is close to human vision. Expanded ISO settings are blocked in this mode.

Video is recorded in the same MP4 format as the 1 D X Mark III, with a choice between H.264 4:2:0 8-bit and H.2654:2:2 10-bit compression. The R3 can also support RAW recording in movie mode, although it misses out on support for High Efficiency Video Coding (HEVC), which provides more efficient compression. A‘Light’ version of IPB compression is available for recording 4K and FHD movies with higher-compression. ALL-I compression is also supported across the resolution range and a necessary setting with high frame rate (HFR) recording at 100 fps.

A noteworthy feature of the EOS R3 is its sophisticated EOS iTR (Intelligent Tracking & Recognition) AF system, which includes advanced subject tracking that can recognise and follow the eye, head, or face of human subjects as well as animal subjects like dogs, cats, and birds and a new Vehicle Priority mode that can recognise cars and motorcycles as well as their drivers.

Built-in IBIS provides up to eight stops of shake correction. It can be combined with the stabilisation systems in optically-stabilised lenses as well as with Movie Digital IS, which provides 5-axis stabilisation.

Our tests showed autofocusing performance was outstanding, particularly with respect to subject identification and tracking, where the camera didn’t miss a beat. Image quality was up to expectations for a professional camera and low light performance was also particularly good. The first signs of deterioration appeared at ISO 25600, although contrast and colour reproduction were retained right up to the H1 setting (ISO 204800 equivalent). Video performance was equally competent with excellent exposure accuracy and responsiveness to changing lighting.

Purchasing Points:
1. The lightweight magnesium alloy body of the EOS R3 has the same level of weatherproof sealing and ergonomics as the EOS-1D X Mark III but is 425 grams lighter. Transitioning from the DSLR to the R3 should be virtually seamless.

2. The Dual Pixel CMOS AF II focusing system ensures outstanding performance with detection across the visible frame and up to 1053 selectable points allowing wide coverage with aperture settings down to f/22. Focus calculations and tracking at up to 60 fps is possible with electronic shutter during continuous shooting.
3. Eye Control AF allows users to direct focus by simply looking at a specific area in the frame. The system must be calibrated to ‘register’ the pupil of the user’s eye to enable it to detect eye movements. It works best without glasses and calibration should be done without contact lenses. Note: It’s only available for shooting stills.
4. EOS iTR (Intelligent Tracking & Recognition) AF provides accurate tracking for human eyes, faces and heads, including when it may be covered by hair, a face mask or a crash-resistant helmet. It can also track animals like dogs, cats and birds as well as vehicles such as cars and motorcycles as well as their drivers. The Vehicle Priority AF mode includes a Spot Detection function that lets users focus on a specific area, such as a driver’s helmet.
5. The mechanical shutter has been durability tested to 500,000 exposures, the same as the EOS-1D X Mark III. The electronic shutter covers shutter speeds up to 1/64,000 second in the manual or shutter-priority modes and supports burst rates up to 30 fps with minimal rolling shutter distortion. Flash sync is possible at up to 1/180 second.
6. Dual media slots allow image files to be written to SD or CFexpress Type B media and the camera offers a full range of recording options including continuous, back-up and separate file types to different cards.
7. Three customisable dials on the camera, plus a Lens Control ring on each RF mount lens, allow shutter speed, aperture, ISO and exposure compensation to be easily adjusted while the camera it held at the user’s eye.
8. Five-axis In-Body Image Stabilisation (IBIS) uses the same sensor-shift mechanism as is found in the EOS R5 and EOS R6 cameras. When combined with an optically-stabilised lens, it can achieve up to eight stops of shake compensation – or 5.5 stops with non-IS lenses.
9. The OLED viewfinder has a resolution of 5.76 million dots and an easily-accessed dioptre adjustment. It has a 23mm eyepoint, built-in eye proximity sensor, a fast refresh rate of 120 fps and 076x magnification. A new Eye Control AF function allows users to direct focus by simply looking at a particular area in the frame. (It’s only available for stills shooting.)
10. The vari-angle monitor is side-hinged and has a resolution of 4.15 million dots with a 170-degree angle of view (H & V), seven levels of brightness adjustment and colour tone adjustment. It supports a full range of touch controls.
11. Dual-band (5GHz/2.4GHz) Wi-Fi and Bluetooth are built-in and the Wi-Fi can be used for FTP or connecting via EOS Utility as well as connecting to a smartphone. The R3 also includes integrated GPS technology for location data logging.
12. The R3 is the first EOS mirrorless model to feature a built-in Ethernet port for high-speed wired LAN file transfer. Configured for professional use, the 1000BASE-T wired LAN supports FTP, FTPS, SFTP and authentication LAN to achieve stable and secure transfer of large, high resolution RAW or video files. It also complies with the international security standards required by press, public organisations and large-scale events.