Panasonic has introduced another Lumix S Series L-mount premium prime lens, the $1099  35mm f1.8, the fourth in a series of primes which also includes the 85mm, 50mm and 24mm f1.8 models.

At just 295 grams, the new lens offers a ‘dust/splash-resistant design’ (Fine print: ‘does not guarantee that damage will not occur if this lens is subjected to direct contact with dust and water’.) The lens can also be used for close-up shots thanks to the 0.24m minimum focusing distance.

We were particularly impressed with the exquisite impenetrability of the following paragraph from the press release: The LUMIX S 35mm F1.8 is compatible with the LUMIX sensor drive at 240fps to take advantage of high–speed, high–precision auto focusing. For the non–linear setting, focus is shifted with a variable amount according to the rotation speed of the focus ring; while for the linear setting, focus is shifted with a designated amount according to the rotational quantum of the focus ring. Sensitivity (the amount of focus shift per rotational quantum) can be selected from 90 to 360 degrees by 30–degree increments.

Panasonic says it will be available in December.

OM Digital Solutions Australia has announced the M.Zuiko Digital ED 20mm F1.4 PRO (35mm equivalent: 40mm) lens, which is scheduled for availability in early December at an RRP of $1199 (NZ $1299).

This tells us that while they can’t use the Olympus camera brand any more, they are still able to use the somewhat more obscure ‘M Zuiko’ brand for Olympus lenses.

‘Beautiful feathered bokeh’ is a phrase which comes up repeatedly in the press release, so we assume that’s the benefit OM Systems wants highlighted: ‘Using the knowhow gained in the development of the M.Zuiko PRO F1.2 series, which delivers ultimate defocusing effects, we have implemented feathered bokeh that slowly introduces blur moving from the in-focus area to the out-of-focus region. (ie, shallow depth of field?) Using an aberration measurement instrument to measure bokeh at the aberration level and deliver optimal control over spherical aberration allows the lens to deliver superior resolution and beautiful bokeh effects.’

The lens can focus as close as 25cm and weighs only 247g, which brings it in well under 1Kg with a variety of Olympus bodies. Olympus says the new prime has  dustproof, splashproof and freezeproof construction (-10°C): Fluorine coating on the front element repels water droplets.

In addition to the flagship full-frame mirrorless Nikon Z 9, Nikkon announced three new optics: a couple of additions to its premium S range of Z-mount lenses, and an upgraded converter for F-mount lenses: 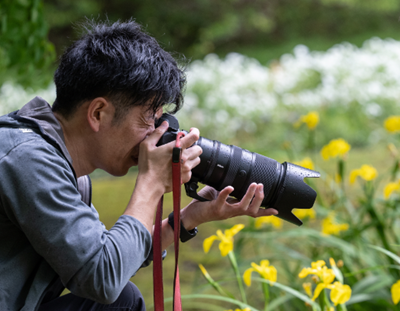 Its shortest minimum focus distance is 0.75m. It has the usual combination of  Extra-low Dispersion (ED) and Super ED lens elements to control lateral chromatic aberration and reduce axial chromatic aberration. In addition, the adoption of Nano Crystal Coat and ARNEO Coat minimises ghosting and flaring, ‘even with a strong light source present.’

Nikon claims a 5.5 stop reduction in blur with Vibration Reduction (VR). Users can also select VR [SPORT] mode,  enhancing the ease of shooting by providing a stable viewfinder image, even during continuous shooting.

New ‘Inner Balance Technology’ helps to maintain the lens balance ‘by reducing the shifting of the centre of gravity of the lens barrel so that users ultimately find it easier to operate.’ It prevents the lens from tilting forward when zooming, and lets users shoot while maintaining the angle of the lens – even when mounting their camera and lens setup on a gimbal head.

The lens comes with a small zoom ring rotation angle of 80 degrees, allowing for easier handling and switching while shooting. You can customise and assign preferred functions on the L-Fn buttons, and check essential details without looking at the viewfinder on the lens information panel.

NIKKOR Z 24-120mm f/4 S
The Nikkor Z 24-120mm f/4 S is scheduled for mid-December availability at an RRP of $1750. It weighs 630g, and once again boasts ‘Nikon’s well-known outstanding dust-and drip-resistance and antifouling performance’. (But read that fine print!) The lens has a protective flourine coating on the front element. 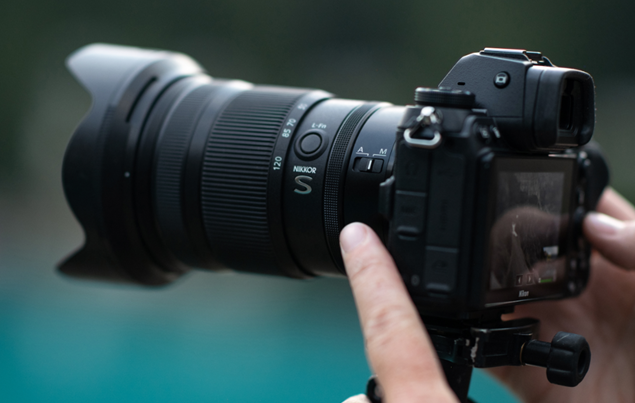 Photographers can assign frequently used functions such as ISO sensitivity, aperture, and exposure compensation to the control ring and L-Fn button for quick access and adjustments.

The control ring also proves useful when it comes to movie recording, with the smooth operational feel and its ability to deliver a natural shift in focus position and brightness level. Focus breathing is limited via a ‘highly effective reduction of focus shifting’ especially zooming in and out of the 24mm to 120mm focal range. Nikon says that ‘during filming from scene to scene, gradual, natural changes is achieved with precise aperture control and stable exposure control.’

Nikon says with the new mount adapter changing lenses, even on a tripod, is now less disruptive and smoother,  without the inconvenience of having to detach or dismount.

For F mount lenses equipped with VR, both the lens and in-camera VR function together to provide compensation in 3-axis directions (pitch, yaw and roll), while for those without VR, the in-camera reduction functions on its own. Reading the fine print, we came across this concession to what you might call universal compatibilty with F-mount lenses: Depending on the position and movement of the subject, which affects lens drive, there are various difficulties when focusing. Aperture control may take time and continuous shooting speed may be slower with some lenses. ​

It weighs 125g and has dust and drip resistance design ‘equivalent to the z 9’ – although this, once again, is not covered by manufacturer’s warranty. RRP is $429.