Film in, prints out at new-gen labs

Less than 10 years ago, analog photography remained a fringe activity with few outlets still processing film. Melbourne film aficionados would typically visit photo retailers, prolabs, or a retail giant to have film developed, and printed into a stack of 6x4s or scanned onto a CD.

There weren’t many, if any, outlets dedicated entirely to just film. That’s now changed.

Melbourne’s Hillvale Photo was one of the first photo labs to engage with the new-age business model. In 2013 the owners, Andy Johnson and Jason Hamilton, first opened the garage roller door of the premises on Black Street, just behind Sydney Road in Brunswick.

Jump on Google Streetview and the gritty street is lined with overflowing dumpsters, and Hillvale fits in well with the surrounding graffiti-laden warehouses. The shop interior is a far-cry from busy retail spaces crammed with shelves and cabinets showcasing the latest photography gear. It better resembles the stripped-back galleries and dive bars in the area.

Hillvale only develops and scans film, with all digital files delivered via e-mail to a Dropbox link. Printing is not an option, and forget scans on CDs – they’re on the way out, anyway.

Hillvale charges just $7 to develop 35mm, or $12 with low-res scans and $22 for high-res. While Hillvale’s prices rose by $2 since Inside Imaging‘s 2016 report, some retailers in Melbourne would likely have adjusted their prices down to compete with the likes of Hillvale. Nowadays, DigiDirect charges $10 to develop 35mm, or $16.95 with scans.

Other new photo labs in Melbourne have since surfaced with a similar model, and there is no shortage of businesses dedicated to the film processing and scanning game. This includes the likes of Halide Supply, Ikigai, FilmNeverDie, and Work in Process (currently on hiatus). Victoria’s second largest city, Geelong, has Analogue Academy, a cafe that processes and scans film.

One of the newest photo labs is Halide Supply on Peel Street in Collingwood. The three owners – Jed Rann, Emil Raji, and Gong – worked at FilmNeverDie and parted ways to start Halide Supply in October 2018.

‘Our background skills really complement each other,’ Jed told Inside Imaging. ‘I’m sort-of in charge of all the mechanical hardware – the film processors and scanners; Emil does all the background IT stuff; and Gong is a great photographer and has the photo industry contacts always coming through the door.’

In the last 12 months Halide Supply’s output has more than doubled, with the processors and scanners running all day and at full capacity.

‘At the start we had a typical customer – a younger crowd,’ Jed said. ‘We’re in Collingwood, so we’re around lots of bars, cafe and restaurants. It’s pretty grungy, and so we started with lots of young adults shooting at pubs, clubs and festivals. But it’s getting a lot more diverse. Since offering a range of services, we’re seeing a more diverse range of customers working with stuff like 120 film. But at the end of the day, we’re mainly developing and scanning colour negative 35mm.’

Most new customers find out about the lab through word of mouth. Jed’s philosophy is that so long as they provide a quality of service at a good price, new and existing customers will stick with them.

Some in the photo industry have a perception that the new breed of young lab operators are essentially inexperienced hobbyists, who decided it’d be fun to try and run a photo lab. Should an issue arise, such as an inevitable mechanical failure, then the whole shebang will go belly up.

While there’s probably truth in that perception – especially when the new breed of labs were learning the ropes – Jed says that despite being self-taught he has a robust understanding of quality assurance; servicing, fixing and sourcing parts for the machinery; and running the business. Having spent years as a forklift mechanic working with pumps, motors and hydraulic systems, a film processor is familiar territory. In fact, it’s quite basic – ‘like a fish tank’.

Halide Supply keeps additional Iwaki pumps and optical sensors on hand, and an additional processor for spare parts. They regularly monitor the chemistry with test strips and densitometer quality control readers, the racks are cleaned and soaked overnight, and their high output means chemicals are constantly replenished so they rarely ‘go off’.

What separates Halide Supply from the other labs is its custom-built IT system that gives the legacy machinery a modern edge.

Emil, an IT expert, ‘virtualised’ the scanners, allowing them to shake free the shackles of early-2000s technology.

In layperson’s terms, ‘virtualising’ a scanner involves ripping it open to see what’s inside, and creating a virtual copy of the computer system. A Fujifilm SP3000, for instance, requires two computers to run – one internal to operate the scanner, and another for output. Jed explains both are meshed into one virtual computer, allowing Halide Supply to use new hardware, such as better monitors or RAM sticks for faster crop speeds. It also works seamlessly with their online ordering system, which Emil also developed.

‘Our scanners are from the early 2000s, so they’re traditionally running either Windows 2000 or XP and are pretty slow. It’s also hard to get good, calibrated monitors for them, or have them sync well with an ordering system – they’re overall clunky,’ Jed said. ‘Virtualising allows us to have a modern operating system. We use Linux here – everything is open source. No MacOS or Windows. Linux allows Emil to customise or use scripts to perform different jobs. It makes introducing something new quite easy. He’s unreal with that stuff, and is the biggest asset to this business.’

The ordering system uses QR codes to streamline orders and minimise mistakes. Before visiting the shop, customers fill out an online order form, which automatically generates a unique code and a Dropbox folder for the scanned image files. When Halide Supply finishes a job, it’s simply a matter of scanning the QR code to deliver the images. It’s as flawless as an ordering system can be, Jed said.

‘Our whole system works seamlessly because of that. With pen and paper, why would you bother? There are too many mistakes, and too much data entry,’ Jed said. ‘Reading someone’s handwriting, for instance, can lead to the human error that slows down business. With one streamlined online system, it’s all worked out.

‘There needs to be more people out there who aren’t scared to push the boundaries with this stuff. Lots of labs know what they’re doing, but might be worried about taking these risks. We changed the way a typical lab set up could be, and it helped us a lot. You don’t need to run it like everyone else, with pen and paper, or on Windows 2000.’

‘You can’t trust the chemistry to just always be available. We’ve had situations where Fuji or Kodak didn’t have the chemistry available for weeks or months, and so having two chemistry stocks means we don’t have to rely on one company.’

Their first processor, the Frontier FP-363sc, was a de-commissioned machine from Harvey Norman, acquired and re-sold by a supplier in Sydney when Harveys switched to inkjet labs. 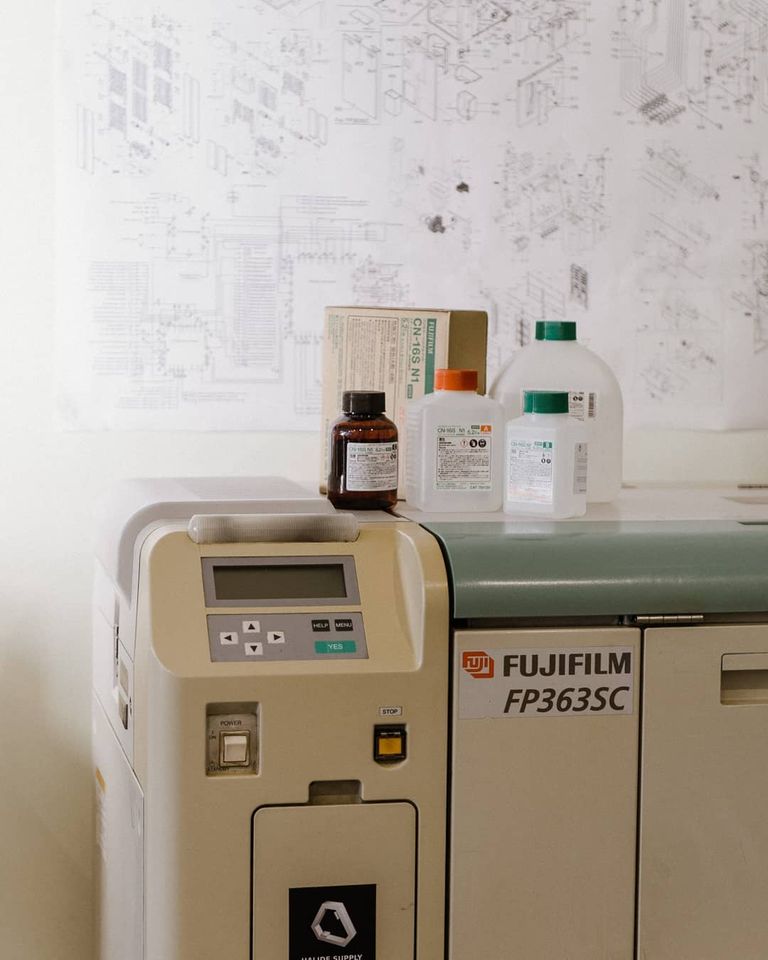 Like other new labs, customers cannot buy 6×4 prints, and the reason is fairly obvious.

‘People do want 6×4 prints, but we can’t compete with Officeworks, Harvey Norman, and Kmart,’ Jed said. ‘They do them for like 10 or 5 cents a print. So we tell customers if they want a 6×4, take the scans and find a kiosk. It would cost us more than sending someone elsewhere to get their prints. And anyway, most people may only want around six prints from a roll.’

The future of film

Jed believes the resurgence of analog photography is partly thanks to smartphones. Point-and-shoot 35mm cameras have surged in popularity, and are possibly more sought after than an SLR. To Jed, it’s because they are user-friendly like a smartphone, but also provide the slowed-down analog experience. ‘They want it to be like their phone, but also not like their phone’.

Jed’s biggest concern is whether the two big brands, Fujifilm and Kodak, will remain committed to this niche market. If either company pulls back its chemistry output, or ramps up prices, it will have a major knock-on affect for labs. With Fujifilm consistently discontinuing film, and Kodak’s overall volatility, it’s hard to have complete confidence in either company.