There was some reluctance driving away from Inside Imaging HQ on Sunday to visit Melbourne’s Photo 2021. For the last taste of summer, the weather gods delivered an uncharacteristically balmy day with Victoria’s west coast looking pristine and delivering up a glassy two-metre-plus swell.

But there was a job to do, an enjoyable task that’s not ordinarily onerous: attend a photo festival and leave with enough ideas and insight to provide a decent review.

This turned out to be almost unachievable. Covering a reasonable portion of Photo 2021 in a day proved impossible without careful planning. On foot, at least. It’s a mish-mash of random public installations and exhibitions spread illogically across Melbourne’s expansive Central Business District and inner city. The festival would be better suited to (inner) Melbourne residents, who can chip away at the festival program or stumble upon public installations during their daily travels.

In the lead up to the inaugural event, Photo 2021 claimed to be Australia’s ‘leading and most significant’ international photo festival. This claim, perhaps unwittingly, threw shade at Australia’s existing photo festivals. Better than BIFB and Head On, and as good as the revered events in Europe.

It’s an ambitious assertion for a festival yet to hang a photo on a wall and Inside Imaging was, admittedly, sceptical about the over-reaching claims. But we’d have be delighted to be proven wrong, as having our very own version of Recontre d’Arles would be nothing short of a great thing!

Inside Imaging didn’t do much planning for our visit to Photo 2021 – just a browse through the online program. The ‘just follow your nose ‘ strategy has been the perfect formula for the likes of the BIFB and Sydney’s Head On, where in less than a day a 10-course banquet of photography can be consumed without strapping on the hiking boots.

If a photo festival falls in the forest…

Photo 2021 didn’t appear to have a central location – an indoor hub where, say, 10 major exhibitions were showing and more could be found within a short radius. And in our defence, we did ask Photo 2021’s publicist for program highlight suggestions for a single day’s visit. We were sent a list of generic links to the website. We didn’t ask for the world, only a suggested itinerary, but that was beyond the PR capabilities of the organisation.

Disappointing, yes, but not out of character. The promotion and marketing of Photo 2021 has been, to be kind, mediocre. There was minimal pre-publicity, absolutely vital for getting the crowds out. It’s part of why event organisers get paid the big bucks.

Despite Inside Imaging likely writing more about Photo 2021 than the rest of Australia combined, we never managed to established a direct line of communication with the organisers. In response to questions, we’ve been handed existing published statements and told they were too busy to liaise. Then we came across a Q&A in Traveller Magazine the creative director, Elias Redstone had participated in on his Most Ideal Holiday Destinations! It may have enhanced his ‘personal brand’, but did bugger all to promote the event to an audience interested in photography.

The enervated communications strategy resulted in a predictable outcome. None of the Photo 2021 Artist Talks on YouTube pulled in more than 100 ‘live’ views, with the average being around 20-40. It’s a shame – the artists, who have prepared talks and shown up, deserve better than that. The production values and effort put into the Festival by a whole range of committed people is more than impressive. The Photo 2021 Instagram page shows the festival is a legitimate large-scale arts event, but it takes more than a nicely curated social media feed to bring forth the people. So for God’s sake, why wasn’t the promotion of the Festival equal to that effort!

Ruth Maddison dishes up a highlight

Anyway, the ‘plan’ was to check out the excellent Ruth Maddison retrospective at the Centre of Contemporary Photography (CCP) in Fitzroy, pick up a program, and head into the city.

The CCP was a hive of activity. As well as showing Maddison’s, It was the best of times, it was the worst of times, the Photobook Weekend was also taking place and what looked like portfolio reviews taking place in another room. A speaker at the Photobook Weekend mentioned it was an excellent event, with a large turnout. As for the retrospective, punters were flowing steadily in and out. Coming from a generation well after Maddison’s most active years, I wasn’t that familiar with her work, but it quickly became clear why she is a venerated Australian photographer.

Her signature hand-coloured photos of ordinary Australia life from the late 1970s have an early, even more vintage quality thanks to the light pastel tones. The pictures from Christmas Holidays with Bob’s Family, Mermaid Beach, Queensland is like watching an old VHS home movie, or an early Technicolor film. While these photos are all about classic summer holidays with picnics, eating Christmas lunch with stupid bon bon party hats, and badminton in the backyard, Maddison’s work also has a more serious edge in her depiction working class life with great affection and empathy, particularly the lives of women.

A nice selection of documentary-style portraits from the late ’70s and ’80s show strong Australian working women, including early migrants in textile factories; along with another series focusing on Melbourne protests, covering everything from women’s rights, socialist and environmental movements, to anti-war marches.

Another highlight is Maddison’s more recent work documenting the people of Eden on the NSW South Coast, where she now lives. The town is described by locals as being run on ‘fish and chips’ (fishing and timber), and the industries have been in steady decline leading to economic hardship. Maddison’s empathy shines through, and there’s also a remarkable resilience pictured in her subjects.

Finally, the newest work is The Fellow Traveller (2020), an exploration into Maddison’s father’s life as a communist who was closely monitored by ASIO. Journalist, Alison Stieven-Taylor, who specialsies in photography, interviewed Maddison about this project and wrote a fantastic article for The Guardian. The interview great context for Maddison’s early documentary work, given her father’s political persuasions would have naturally influenced her interest in documenting the proletariat. Read here.

With a program in hand, the Inside Imaging team strolled down Smith Street towards Melbourne. We unknowingly passed a portion of Portrait Of Humanity – finalists’ images from an international contest run by 1984, publisher of the British Journal of Photography.

Portrait of Humanity has been bizarrely split into eight public locations across Collingwood, Fitzroy and Carlton. According to Google Maps, by following the fastest route it would take around an hour of walking to see the entirety of Portrait of Humanity. No way. It’s too damned hot to take a higgedly-piggedly 4.2km walk.

What did make sense was stopping in at one of Melbourne’s iconic roof top bars for tapas and a chilled carafe of sangria. The program pointed us toward Flinders Street, where there was a cluster of outdoor installations – primarily new commissions – and a handful of gallery exhibitions.

One of Photo 2021’s big achievements was bringing all the leading Victorian arts and cultural institutions together to celebrate photography. We were told this partly formed the justification of labelling it Australia’s ‘largest and most significant’ photo festival. It was surprising to discover the National Gallery of Victoria had already featured its Photo 2021 exhibition – a major Destiny Deacon retrospective, showing over 100 works by the indigenous Australian artist. The exhibition opened in November 20220, and ended just under a week before Photo 2021 opened!

There is an obvious explanation here. Photo 2021 was originally scheduled to run in September 2020, but was postponed due to the Covid shutdown. It’s possible the galleries couldn’t rework the schedule, and ran the Photo 2021 shows outside the new festival dates. Although Melbourne Museum, another participating cultural institution, disappeared from the program altogether. No one said anything.

(Speaking of disappearances, Bill Henson was prominent in early promotion for Photo 2020/21, with a strong indication he would be an exhibitor – which would have been a brilliant move. Then he just wasn’t there any more. Wonder why?)

Anyway, we popped over to Federation Square to see the guerilla-art-turned-mainstream-project, Inside Out – black-and-white portraits pasted to the floor. I’d learned about it during the Photo 2021 launch livestream, which was viewed live by just under 100 people around the world.

Stupidly, I didn’t check the dates and was confused as to why there was no portraits to walk on. Inside Out only showed for three days – we missed it by a week! To make matters worst, we’d left our festival program at the aforementioned roof top bar.

Fortunately, we had made a mental note of the nearby photography. A public installation of a festival commission, Agonistes, by Iranian Australian photographer, Hoda Afshar, appeared on floor-standing frames on the lawn at the adjacent St Paul’s Cathedral. The black-and-white portraits are of whistleblowers, with Afshar combining ‘new and old photographic techniques’ to turn the subjects into Hellenistic statues. Plenty of people were stopping to take a closer look, and importantly read the caption describing what the whistleblower had bravely spoken out against.

Next to this was Surge, another Photo 2021 commission as part of the Metro Tunnel Creative Program, by Kate Disher-Quill and Phoebe Powell. The photos explore the experience of healthcare workers, who had to quickly adapt to Covid. Around the corner and down an alley was another Metro Tunnel commission, a single portrait by Maree Clarke called Uncle Jack Charles (Men in Mourning). 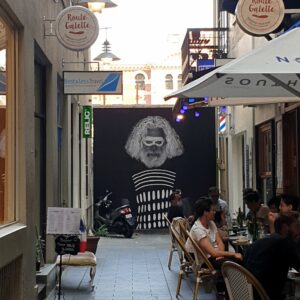 Charles is an indigenous Australian actor, and his portrait stands tall and strong with his gaze directly into the camera. It’s a very large single powerful image, and more to this series would have been welcome.

Without a physical program, the only way to find more nearby photography was navigating the distinctly user-unfriendly online Photo 2021 ‘Map’. By this time the Inside Imaging viewing party had grown slightly weary, with inappropriate footwear resulting in blisters on ankles. But we weren’t yet full of photography, and marched on to find a nearby commissioned portrait series.

The blistered half of the party, a French native with an excellent handle on the Australian vernacular, dubbed the project description as ‘wanky’ – although it was the first project to specifically address the festival’s theme, ‘The Truth’: ‘By appropriating the institutional criminal photograph normally associated as evidence in a court of law, the portraits play with the idea of photograph as “evidence”, or, document of “truth”. Without captions, the images point to the fluid dispersion of images in the post-truth, internet era: are these Tinder profile photographs, fashion headshots or records of the FBI’s most wanted?‘

An alleyway or so further on was another commission, a single image called More Bunny by US photographer Lucas Blalock. It was, well, an image of a toy bunny ‘opened as if surgically, and containing a blanket of the same material, (using) humour to propose a literalist investigation of “what lies beneath.”’ 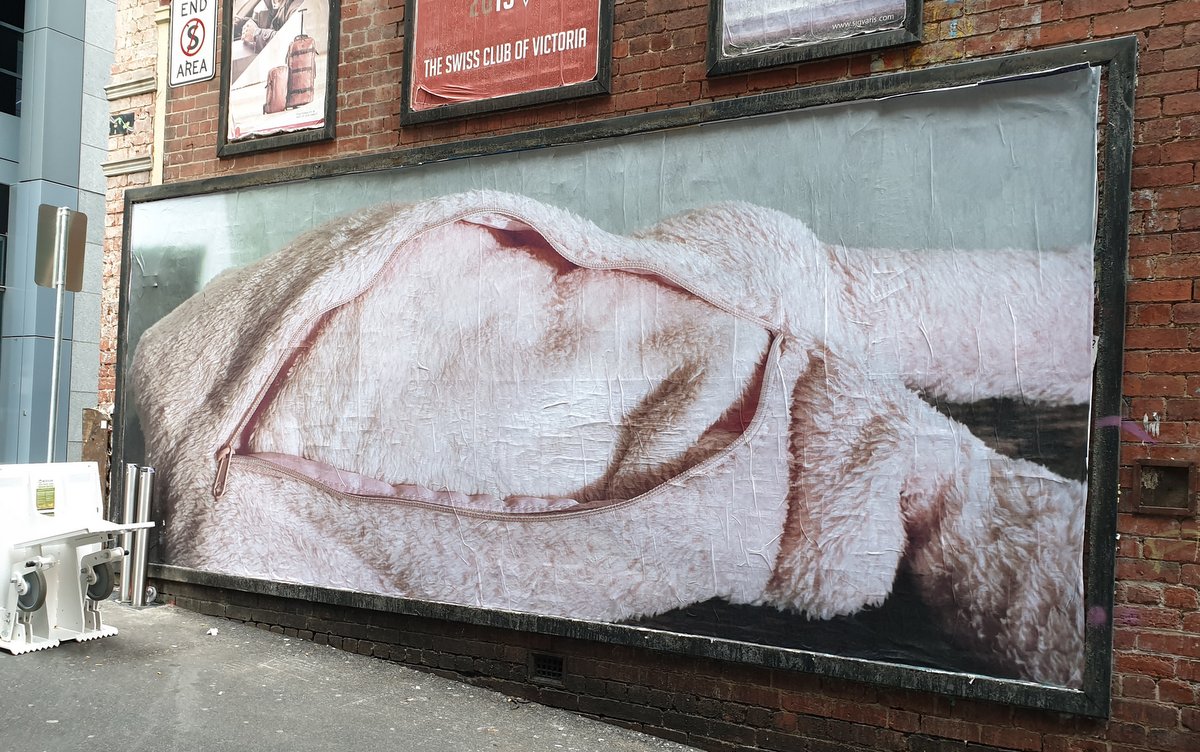 The humour fell on deaf ears. Maybe we were too stupid to get the joke. But we had had enough of Photo 2021 and went home, where the wind had picked up and whipped the morning’s beautiful denim-patterned ocean into a churning washing machine.