Renowned portrait photographer, Peter Adams, is close to completing his monumental career-spanning project, A Few of the Legends, a book that took him across the world to document photography’s living legends. 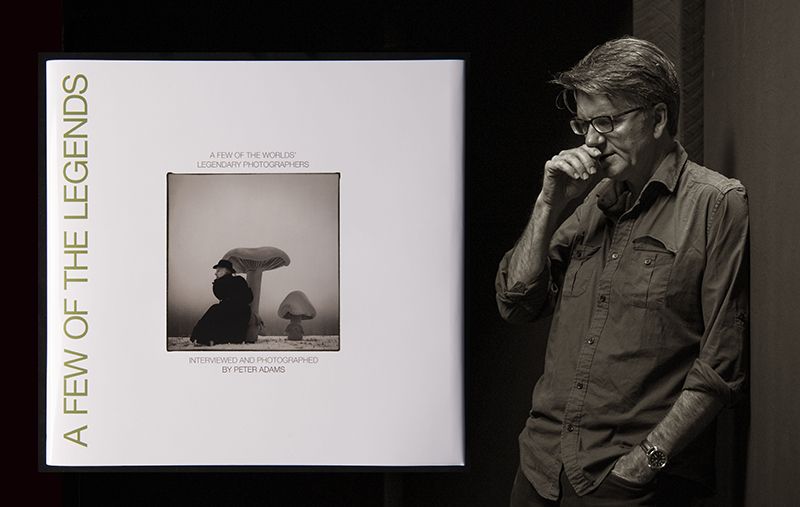 Imagine travelling back to 1983 and trying to convince a young Peter that an upcoming boozy lunch with friends in Sydney would be the catalyst for a photography project set to last decades. That it would lead to interactions with legends like Eddie Adams, Helmut Newton, Yousuf Kearsh, Annie Leibovitz, Alfred Eisenstaedt, Joe Rosenthal, Arnold Newman, Manuel Álvarez Bravo, Olive Cotton, Rennie Ellis, William Klein, Mary Ellen Mark, Don McCullin, Sebastião Salgado, and many others.

And in 2021,  fully 38 years later, he’ll independently raise funds via an online ‘crowdfunding platform’ to help finance the book’s production.

A Few of the Legends features more than 250 portraits of influential photographers from Australia and around the world, along with an accompanying short essay about the photographer written by Peter. Running for over 600 pages, it’s a weighty tome – a comprehensive portrait project of 20th century photographers, drawing strong influence from the artist portraits by Arnold Newman.

Inside Imaging spoke with Adams last year. Here’s an excerpt from the article:

First and foremost Adams wanted to photograph the ‘old timers’, such as Alfred Eisenstaedt, who captured V-J Day – the photo of the sailor kissing the woman in Times Square to celebrate the US defeating the Japanese in WWII. As time went on, the criteria was opened up to any photographer with a philosophy or great idea.

‘There is no great piece of artwork that works unless it has an idea. If we’re talking about digital manipulation, putting a duck in a pond or a new sky in a landscape isn’t an idea – it’s a technical exercise, a craft. The people I wanted to include had ideas or philosophies about why they were taking pictures, or changing elements in the pictures.’

If an interview went well, opportunities arose to spend more time with some of the greatest minds in photography, while in other instances it was a case of ‘never meet your heroes’ – some may have ‘egos the size of New York’.

Adams arrived in Monaco in 1987 to photograph fashion photographer Helmut Newton. He apparently lived between there and Los Angeles to avoid paying tax.

‘We arrived at his high rise apartment in Monaco, and the reception area was like Darth Vadar’s bathroom. It was all black, shiny and horrible. We pressed the button, and over the intercom he said “you’ve got exactly an hour”. In the elevator I looked at my assistant and said “I get the feeling we’ll be out of here in 45 minutes”. We entered his flat, and he was just unbelievably rude.

‘He spoke about how he likes to destroy art directors, won’t do a job unless it’s done his way, and how much he liked to charge. While he was saying all this, I was quietly photographing him sitting on a couch under a big painting of a pink cow. When I got back to Australia, I sent him a print of the portrait, and he sent back a postcard saying “it’s a very lovely portrait of a pink cow, but I don’t like the way I feature in it. Please take me out of the book”.’

But the contract was signed and the job was done. In A Few of the Legends, this exchange is recounted, along with the portrait and Newton’s postcard. ‘It says more about him than I can say’.

Having finished the portraits some time ago, Peter and his team chose to self publish the book and have been chipping away at the design. Now in its final stages, a Kickstarter campaign offering pre-orders of the book will help cover the printing overheads.

They settled on the modest crowdfunding goal of $8000. And this was achieved after just a few days, with the funding currently sitting at over $18K.

The team utilised their many photo industry connections, and called on hundreds of friends and colleagues to promote the campaign.

‘Our goal is to use this to have the book up and running, and maybe another exhibition in the future,’ Dani told Inside Imaging. ‘Peter has checked the proofs and dyelines, and the book is now in production. We’re hoping to ship it by mid-October, but with Covid it’s possible there will be delays.’

The crowdfunding campaign is open for over a month, with discounted pre-orders available by pledging to the book’s production. A $150 donation buys a signed first edition of A Few of the Legends (worth $200). With a $250 donation, the book also comes with a limited edition print. $300 buys two copies of the book, and so on. Click here to check it out.