An Auckland-based pet photographer has been caught passing off composite images as straight out of camera, with it emerging he sources landscape stock photos and inserts dogs into them.

On the left is NZ photographer, Ben Sheehan’s composite of a Getty Images stock photo, right. Source: Photo Stealers.Photographer, Ben Sheehan, has amassed almost 7000 Instagram followers and won awards with his dog portraits and travel photos. But he’s been busy deleting many pictures which, despite initial claims they’re original captures, have been exposed as composites by Photo Stealers.

Image composites created with editing software is a valid area of photography, although it’s generally frowned upon when the creator is dishonest or lies about the editing.

Melbourne image composite extraordinaire, Lisa Saad, was celebrated and greatly awarded for her ability to create otherworldly photo art. But when it was discovered she didn’t photograph each element as she claimed, and instead used third-party clip art, the punishment was swift.

Photo Stealers describes the actions of Sheehan as ‘Saad-esque’, although he hasn’t garnered the same successful profile through his use of third-party imagery.

Rather than being a fully established pet photographer, Sheehan appears to be more up and coming and is most active on Instagram. He’s won a few minor photography contests and offers paid mentorships to other photographers, who are likely drawn to him by his photography portfolio.

Based on Photo Stealers’ investigation it looks like Sheehan licenses stock photos of landscapes – primarily breathtaking natural locations around New Zealand – and makes several major edits, such as cropping, adjusting colours and shadows, and cloning. The finishing touch is inserting a pet dog into the picture to make it a composite.

Sheehan then passes off his composites as his own single exposure, and goes into detail about how he lugged his gear into locations and tediously set up shots.

One commenter even directly asked whether an image was a composite.

‘No it isn’t,’ Sheehan responded and explained how it took five times to pose the dog and nail the photo. There are over 20 examples where the photographer appears to have sourced stock photography or HD wallpaper to create composites. 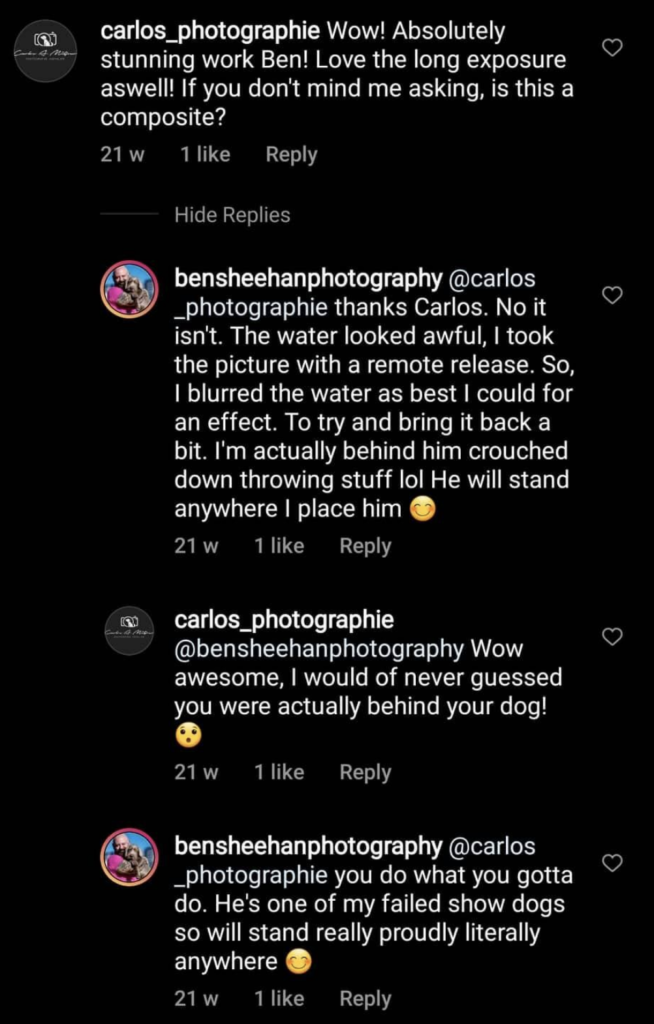 ‘Look, there’s a niche for photographers who composite well and make compelling images,’ writes Corey in her Photo Stealers post. ‘However, when they block/delete anyone asking about the original image, take credit as if the entire image is their original creation (see many of the replies about how he got his dog in these positions) there’s a problem.

‘Another shitty part of this story is that dogs are not allowed in most of these parks. When asked, he claims he got special permission and/or paid a steep sum to allow this to happen.’

There is no denying that Sheehan’s tales about going on painstaking hikes into national parks with his dogs make for a better yarn than simply licensing a stock photo and editing a dog portrait in with finesse. But his photos would still garner an audience, regardless of the story behind them. There is endless demand for cute dog pictures, and Sheehan is clearly a skilled editor. In fact, if he went and captured the landscape images himself and was upfront about creating a composite, plenty of photo contests would still reward his approach.

The photographer has since deleted his Facebook page, and according to Photo Stealers has deleted numerous offending images and comments.