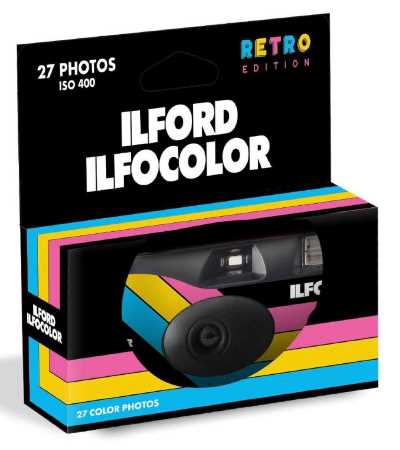 This comes hard on the heels of the success of the Ilford Sprite II compact film camera, announced late last year. And as with the Sprite – which was originally released in the 1960s – the Ilfocolor Rapid pays homage to Ilford’s past: while Ilford was best known for its black & white film and photographic paper, it also sold a range of Ilfocolor colour negative film.

It’s a great way to trial the distinctive look and feel of film without breaking the budget.

(Unlike many digital cameras), the single use film camera features an optical viewfinder – essential when shooting in bright sunlight. It’s equipped with a fixed-focus wide angle (31mm) f11 lens. Shutter speed is 1/125 sec. The camera delivers sharp images down to 1m.

It’s pre-loaded with an AAA battery, with a 15-second recycle time for low light shooting and fill flash in bright daylight.

Ilford Imaging Europe products are distributed in Australia and New Zealand by CR Kennedy & Company, the joint owners of the ILFORD Trademark.