Victoria Police is ‘very sorry’ for arresting Herald Sun senior photographer, Jake Nowakowski, while he was documenting an anti-vax protest on Saturday, February 20. 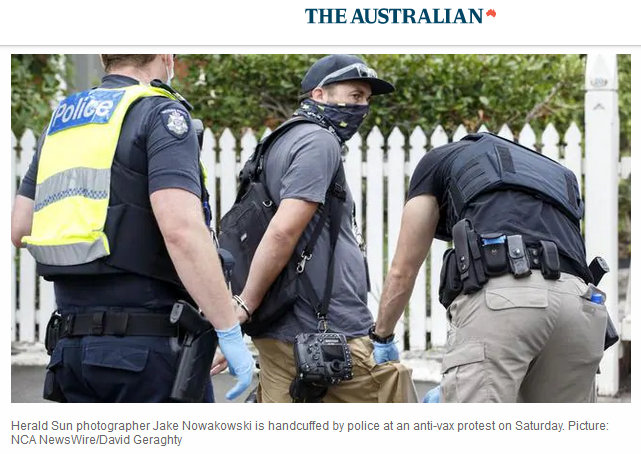 In what’s been described as an ‘appalling misuse of power’ by the Sunday Herald Sun‘s editor, Nowakowski was arrested alongside reporter, Olivia Jenkins, at Fawkner Park, where demonstrators encountered police. The pair were both wearing Herald Sun media accreditation cards, and informed the police they were journalists but were arrested anyway.

‘In the past 12 months, Victoria Police has seen an increase in hostile and at times violent protests throughout the state,’ a Victoria Police spokeswoman said in a statement. ‘(Saturday’s) protest at Fawkner Park was no different and during a very dynamic situation, a journalist and photographer were caught up with the protesters and arrested.

‘To be clear, it is not our intention to arrest journalists who are simply doing their job. We understand and appreciate the important role media play reporting on news events such as this and we are generally only too willing to assist them with their requests. However, the reality is we have seen an increased number of protesters claim to be media in order to actively avoid police enforcement.’

Nowakowski often documents protests in Australia, and has experience working in this environment. He was a finalist in the 2020 Nikon-Walkley Awards for Excellence in Photojournalism for Extinction Rebellion, a series of global environmental demonstrations that violently clashed with police in Melbourne. At the 2020 Head On Photo Festival the photojournalist showed Neo Pride, an exhibition showing four years of violent race rallies in Melbourne.

It’s the first time he’s ever been arrested at a protest. The photographer and journalist were caught between a police encirclement, a controversial tactic known as ‘kettling’ – a German military term used to describe when an army is surrounded by a much larger force. While they managed to leave the first encirclement, they were caught in a second cordoned area and arrested alongside protesters.

‘Special operations police started entering the cordon and arresting the protesters and then they arrested us,’ Nowakowski told NCA Newswire. ‘We were handcuffed and then marched away for processing and told we were going to be fined $1652.’

Police said 20 people were arrested and fined for breaching the chief health officer’s directions limiting public gatherings to under 20 people. The pair were released after around 10 minutes.

‘I think it was just unnecessary,’ the photojournalist said. ‘We weren’t given the option to leave that encirclement – I don’t know how we ended up in the second encirclement, it just happened. Police have powers of discretion, they can tell the difference between a protester and a journalist and the intentions of an individual.

‘They could have just let us off with a warning and said try not to congregate in groups of more than 20 people, which is what the charge was. It was obvious that we weren’t protesting, we were media who found ourselves in the wrong place at the wrong time.’

‘Our reporter and photographer were just doing their jobs and made it clear they were members of the press,’ he said. ‘Yet they were handcuffed, frogmarched and then issued with notices. This is not how democracy operates and this is not how Victoria Police should uphold the right.’