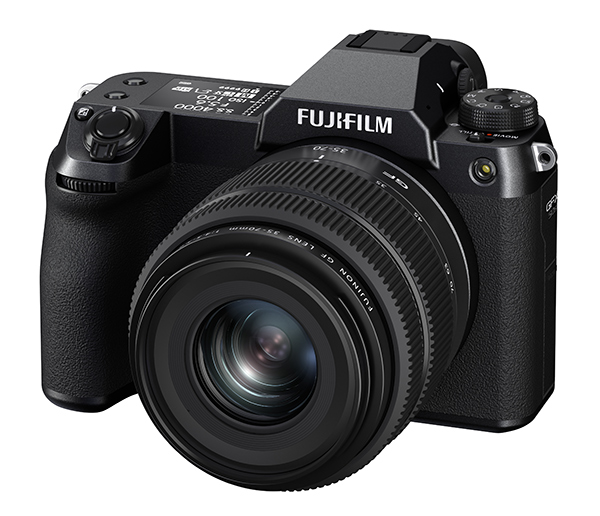 The new camera comes with the same 51.4-megapixel sensor as the GFX 50R but its body is based upon the GFX 100S, which includes a five-axis image stabilisation mechanism boasting up to 6.5 stops of shake correction. The body of the new camera is made of magnesium alloy with added thickness strengthening the base of the lens mount.

It is weather-sealed at 60 locations and weighs only 900 grams with battery installed.

The top panel design is identical to the GFX 100S, with a conventional mode dial and 1.8-inch LCD data display showing key settings such as shutter speed, aperture, ISO sensitivity and exposure. The 0.5-inch  OLED viewfinder has a resolution of 3.69 million dots and a 23mm eyepoint, while the three-way tilting 3.2-inch touch screen LCD monitor has a resolution of 2.36 million dots. Both claim full frame coverage.

The GFX 50S II is equipped with the latest X-Processor 4 image processor, as well as a contrast-based AF system with improved speed and accuracy. Nineteen Film Simulations are available for JPEG shooting, among them the popular ‘Nostalgic Neg’ mode, which was developed for the GFX 100S and is characterised by high saturation and soft tones. The GFX 50S II includes the Pixel Shift Multi-Shot function, developed for the GFX 100S, which uses the camera’s IBIS to shift the image sensor by half a pixel and records 16 RAW images. Fujifilm’s  Pixel Shift Combiner  software, a free download from the company’s Support pages, transforms them into a single Digital Negative (DNG) file, resulting in an ultra-high-definition 200-megapixel image.

There’s not a lot in the press materials regarding the new GF 35-70mm f/4.5-5.6 WR ‘kit’ lens, although there are rumours it is not stabilized and doesn’t have an aperture ring.