Fujifilm has announced the GFX 100S, a 102-megapixel medium format mirrorless camera that shares many features with the GFX 100 but in a more compact and portable body. The GFX 100S will be available from the end of February with an RRP of $9499.

Update: Fujifilm also announced the Fujinon GF80mm f1.7 R WR prime lens will be available from the end of February for $3499. 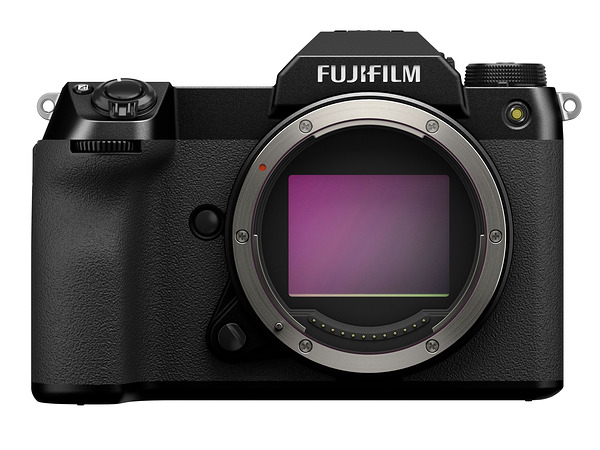 Fujifilm’s marketing has focussed on how medium (or large) format system prevail over full-frame cameras, pointing out the sensor is approximately 1.7 times larger than full-frame. ‘This provides it with a significant advantage over smaller (full-frame) sensors when it comes to producing images with incredibly shallow depth of field, fantastic dynamic range, faithful colour reproduction, and outstanding high-ISO performance,’ the press release says.

Here’s another one:
‘…Measuring 15cm wide, 10.4cm tall, and 8.7cm deep, GFX100S’ compact body is comparable in size to many full-frame cameras. Despite the compact size, it packs a high-performance IBIS and a 102MP imaging sensor that is almost twice the physical size of a typical full-frame sensor.’

The In-Body Image Stabilisation system is new, with 6-stops of image stabilisation equalling a 0.5-stop improvement over the GFX 100. It’s also 20 percent smaller and 10 percent lighter.

The GFX100s has on-sensor phase detection pixels covering almost 100 percent of the frame, allowing the camera to focus in as little as 0.18 seconds with luminance levels as low as -5.5EV. The processor also has a focus tracking algorithm to keep subjects in focus when using Tracking AF or Face/Eye AF functions. 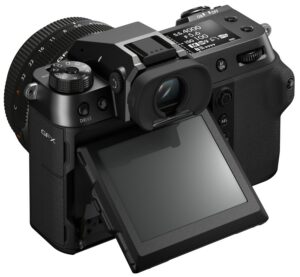 ‘In addition to being able to record 4k footage in a 16:9 aspect ratio, GFX100S supports a 17:9 aspect ratio, frequently used in digital cinemas. The most commonly used compression codecs, like H.264 and H.265 are also available. Additionally, professional standards, like the REC.2100 supported Hybrid Gamma Log (HLG), or F-Log can be selected for complete creative control,’ the press release says.

The displays consist of a 3.2-inch touch-capable 2.36-million-dot tilt-able LCD on the rear, and a 1.8-inch sub LCD monitor on the top plate, which can be customised to show EXIF settings. Other controls include a PASM dial, with six programmable custom options, while a switch allows users to flip between still and move mode.

This lens features nine-rounded diaphragm blades, which can be stopped down to provide edge-to-edge sharpess or opened up to achieve smooth bokeh.

The lens construction consists of 12 elements in nine groups, including one aspherical elements and two Super ED elements. The design attempts to control spherical aberration and deliver quality bokeh.

High-precision glass molding technology on both surfaces of the aspherical lens element provide tolerance of 1/100,000th of a millimeter, according to Fujifilm, which is five times more accurate than regular molding. This ‘reduces the onion-ring effect caused by slight defects in the lens surface on its out-of-focus regions.

The lens has a DC motor with enough torque to drive the focus group of six lens elements, delivering accurate and reliable autofocus and shallow depth of field. The lens also supports Face / Eye AF mode.

The lens weighs 795 grams, and measures 99.2mm long. It has weather resistant seals along the barrel at 10 locations to protect from dust and water. The front element has a fluorine coating to repel dirt, and the lens can operate in temperatures down to -10°C.