Melbourne-based ‘all-things-film’ business Filmneverdie.com, frustrated with the constant challenge of keeping dilapidated old minilab film processors running with rubber bands and fencing wire, has launched a Kickstarter project to build its own commercial rotary drum film processor, with a price of $3800. 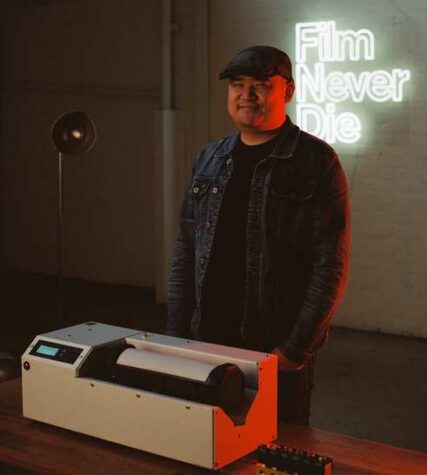 The resurgence of interest in film has led to heavy demand for old film processing equipment, but neither Noritsu nor Fujifilm refurbish their old processors in Australia, leaving old and new businesses which specialise in film development and scanning scrambling for equipment.

‘There are simply no service technicians to call on and spare parts are thin on the ground. In fact, the CP800 was first conceptualised in 2019 when our “faithful” Photo-Therm Super Sidekick-4 kicked for the last time,’ explained Filmneverdie

‘A suitable replacement was difficult to come by, the large majority of second hand/classifieds were incomplete, untested & or harshly overpriced. Instead of rolling the dice on another obsolete processor we decided to make our very own,’ filmnevrdie explains in the Kickstarter ‘prospectus’.

Brisbane-based photo retailer Phil Gresham, whose business FotoFast is one of the leading film processors in Australia, has just spent close to $20,000 airfreighting an overhauled Noritsu V50 film processor from Florida.

‘Ten yeas ago they were still taking them to the dump!’ he said.

He said the proposed Filmneverdie unit would not suit his business because it wouldn’t be able to keep up with throughput, and anyway there are already proven desktop-type film processing units available from Jobo.

We went back to Morgan at Filmneverdie to ask why someone in the market for a low-throughput film processor would get behind the proposed CP800 unit rather than, say, the Jobo CCP-3/Lift, and how they would handle selling into an international market. He came back to use with some compelling arguments:

-The Jobo CPP-3/Lift is currently retailing for $5616 at Vanbar Imaging. Comparatively the CP800 will retail at $3800, a 32 percent saving;
– The Jobo CPP-3/Lift comes with 1L solution bottles, whereas CP800 utilises 2L & 5L storage receptacles;
– Jobo CPP-3/Lift is semi-automated still requiring chemistry handling, whereas the CP800 is fully automated;
– Jobo CPP-3/Lift has a plastic crate-like construction, whereas CP800 has a rigid sheet metal construction;
– The CP800 will work with 110 & 220 volts. We will ship the unit with the appropriate plug for the destination country;
– Default plumbing connection will be BSP thread (UK/Commonwealth standard). However, an NPT adaptor can be included;
– We offer a 5-year warranty on all parts;
– 24/7 email & Mon-Fri 10-6 AEST phone technical support available. Includes service book covering all foreseeable issues and their solutions; Error codes for easy trouble shooting; and a data logging system to further diagnose the issue remotely.