CIPA stats: Cameras are back!

Interchangeable lens cameras shot the lights out, with March shipments almost twice those of Covid-stricken March 2020. For the quarter, interchangeables are up 18 percent in volume and 48 percent in value compared to Jan-Mar 2020. 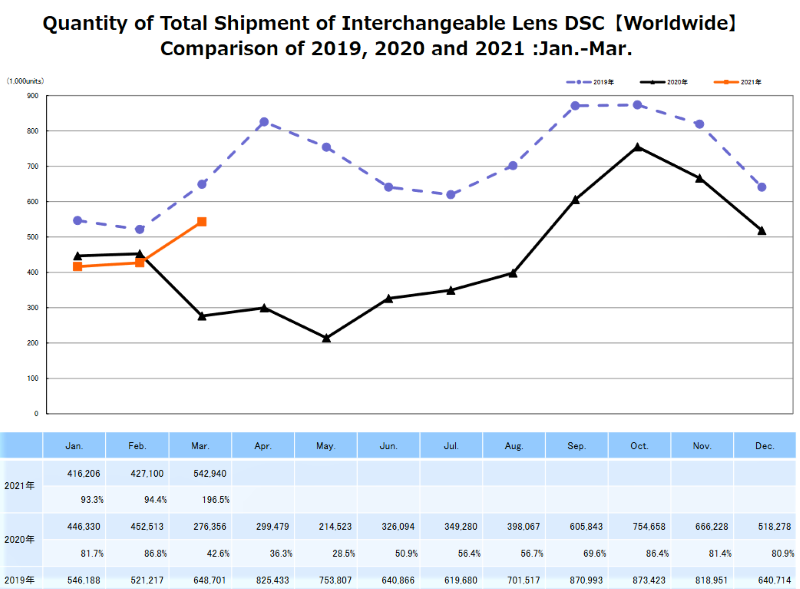 The quarterly figures lay bare the contrasting paths of DSLR and mirrorless technology: while there was an increase in the volume of DSLRs shipped, by about 6 percent, their overall value slipped by about the same amount. On the other hand, mirrorless cameras increased 30 percent in volume terms and over 80 percent in value. While mirrorless cameras now account for about 60 percent of interchangeables shipped, three out of every four dollars spent on an interchangeble lens camera goes towards a mirrorless model.

Lens shipments are also well up for the quarter, peaking at 41 percent year-on-year in March.

While interchangeable lens cameras and lenses have thus far recovered from the trough which was 2020, digital compacts continue their retraction, with a fall in shipments for the quarter of about 17 percent on 2020’s already depressing figures.

CIPA, the , released a consumer su

The 1st place went to “Print photos with a home printer,” at 37.3%. The 2nd place went to “Edit photos or use photo effects on computer”; the 3rd, “Post photos online exclusively for friends/acquaintances”; the 4th, “Post photos online for anyone (including strangers)”; and the 5th, “Print photos at a camera shop/electronics store” all ranked high, and accounted for 18.2%, 14.0%, 12.5% and 11.9% respectively.“Print photos on a home printer” scored the highest at 61.6% for those in their 70s, followed by 36.7% for teenagers. Also, 23.3% of teenagers answered “Print photos at a camera shop/electronics store,” which was the only generation that exceeded 20%. “Print photos at a convenience store,” for which the total remained at 6.7%, scored as high as 20% for teenagers, indicating that photo printing is popular.