The Monochrome Photography Awards is again making headlines for looking dodgy, after two judges claim to only have critiqued a small portion of the apparent 7000 entries. 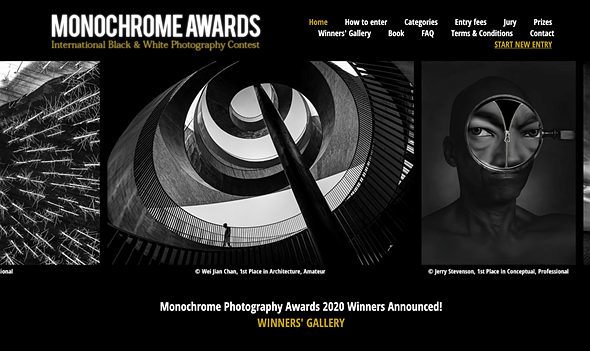 When Dpreview published a slideshow of the 2020 Monochrome Awards winners in late-January, a reader alerted editors to a 2018 PDN report about the contest being a ‘scam’. Dpreview writer, Kara Murphy, contacted the 2020 judges to find out about the judging process, and received two responses from judges Petra Leary and Christina Dim.

‘Basically without completely ripping them apart, because I do appreciate that they wanted me to be part of the team, the judging experience for the Mono Awards was terribly planned out and the User Experience was awful,’ Leary said. ‘I had to sift through over 800 photos, clicking in and out to open each. The site would crash continuously meaning you had to reload and sometimes re-judge images, and the system for rating was very basic and confusing. I’m not sure how they filtered it down to the finals.’

Photo contests typically have a clear process and criteria for the judging panel to follow. It’s common for judges to collaborate to whittle the entries down and pick a winner. Alarm bells start ringing when they have no idea how the finalists were even selected, let alone the winner.

And as previously stated, the Monochrome Awards also have a track record for being a potential ‘scam’.

Back in 2018 US photographer, Allison Barnes, said she was listed as a judge for the 2016 and 2017 Monochrome Awards but didn’t judge a single image. The second year, in 2017, she requested her name be removed from the website but this didn’t happen.

The Monochrome Awards were then unearthed as being part of a shady photo contest empire, operated by a mysterious Polish photographer named Martin Stavars. Of course, this information isn’t available on any of the contest websites – none of the five contests cite who is behind them.

The five contests – International Photography of the Year (IPOTY), Monochrome Awards, Fine Art Photography Awards, ND Awards, and MonoVision Photography Awards – were linked by sharing the same internet server or Google Analytics account. The contests have similar cash prizes, with the winner receiving around US$3000 from a prize pool under $10,000 in value.

Since the 2018 reports by PDN and Petapixel, only IPOTY has folded. Coincidentally this was the primary contest under scrutiny.

If the contests were legitimate, with transparency regarding who organises the awards and how the judging system works, then it would  be merely a matter of responding to Dpreview, or PDN and Petapixel back in 2018. It’s telling when no one behind any of the contests have come forward to defend themselves from the allegations to clear the air.

Dpreview indicated it won’t promote any of these contests in the future. Inside Imaging never has, and never will!

There is serious money to be made running online photography contests. With low overheads, a contest can easily generate over US$100K in revenue on entries alone.

Many photo contests follow this recipe for success:
– Establish a great brand and name, something like the ‘[insert genre] International Photographer of the Year Awards’;
– Build a sleek website;
Ensure there are numerous titles to win, whether that’s with different categories or honourable mentions;
– Hire a judging panel of esteemed and respected photographer;
– Pour funds into a marketing campaign;
– Pull together a prize pool, with cash prizes, award certificates and/or gear up for grabs, as well as a ‘title’.

After building a website and establishing a brand name, such as the Monochrome Awards, the overheads plummet. Primary costs are covering the prize pool, judges, marketing and web maintenance.

The Monochrome Awards claim to have received 7096 entries, with fees ranging from US$15 (early bird amateur) to US$25 (pro). These are the Goldilocks fees for online contests – not too much, not too little.

While it’s possible the contest inflated entry numbers to appear more established, let’s say the figures are accurate and entries cost just US$15 a pop – that’s US$106K. It’s unknown how much the judges were paid, but the prize pool is US$3K cash, so it’s fair to say someone is making good money!

The same formula can be applied to many other photo contests.

The major difference between Stavars unethical photo contests and most other for-profit contests is that Stavars’ judging system looks shonky. It doesn’t appear the esteemed judging panel have a major input. Perhaps it comes down to just being lazy, or skimming extra money off the top. If it wasn’t for a few judges flagging it, no one would know. The contests would appear virtually identical to other prestigious online contests, and continue to receive media coverage promoting the awards. (Let’s face it, most of the photo websites could hardly be described as choosey in what they file.) Just repeat the same formula across five contests, and that’s an extremely lucrative business.

Photographers should always read the contest T&Cs, and ensure the About Us section lists people operating an organisation, take note of past winners and judging panels, and weigh up whether it’s worth forking out the money for an entry fee. But, at the end of the day, it all looks the same on the CV.