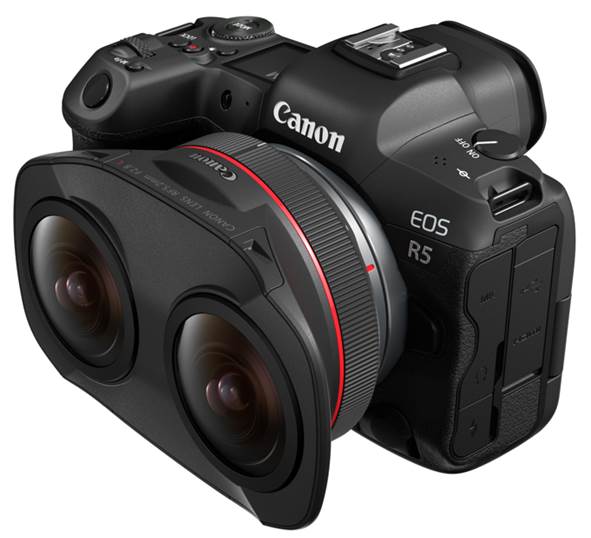 The ‘world’s first’ pig snout-looking interachangeable dual lens system isn’t used for truffle hunting, but capturing two images onto a single sensor with perfect alignment and synchronisation. The two lenses have a190-degree field of view, which form the basis of its stereoscopic VR capture capability.

‘Capturing two images on a single sensor also means that both images have the same performance characteristics, avoiding subtle variances such as image quality and exposure that other two sensor systems can suffer from,’ Canon states in the press release. ‘Additionally, the two EMD (aperture) units, one for each lens, are also finely controlled to maintain a consistent exposure onto the sensor – helping to reduce post-production grading and expertise required to match the left and right image output.’

Canon is also developing a subscription-based (Adobe style?) software application, EOS VR Utility, as well as an Adobe Premiere plug-in, for convert the video into a standard 180° VR format for editing or viewing from a headset.

The ‘effortless’ image conversion process is, according to Canon, an otherwise complicated and time-consuming task when using dual cameras. ‘With these additional solutions, videos and stills can be easily processed and exported into various resolutions and (professional) codecs, up to 8K in file size for video output – designed for post-production editing and/or final playback on suitable VR headsets’.

References to VR headsets, such as the Oculus Quest 2 which is mentioned in the US press release, shows that Canon views VR as an area of growth. This technology was hyped around five years ago with the emergence of consumer VR headsets, but has since underperformed and is yet to make a significant impact in visual entertainment, such as video gaming.

Although VR is still tipped to have a promising future, and this lens may partly open the gates for better VR video capture.

It features two UD elements per lens for clear images from edge-to-edge, and a SWC coating to suppress sunlight ghosting and flare.
The rear elements have a gelatin holder, allowing users to attach third-party gelatin ND filters to maintain ‘normal’ shutter speeds and apertures when shooting in bright conditions.

Canon suggests this camera is best paired with the EOS R5, which offers 8K video and an MF Peaking function for simple assisted manual focusing that highlights areas within focus.