Blackmagic Design has thrown down the gauntlet to broadcast/feature film quality video camera competitors such as Canon, Sony and Red by slashing the price of its 12,288 x 6480 pixel Ursa Mini Pro 12K by around 40 percent, to $9435. (US price down from US$10K to US$6K.)

Blackmagic said the price reduction ‘has been made possible by efficiencies in manufacturing combined with an improved supply of 12K sensors.’ 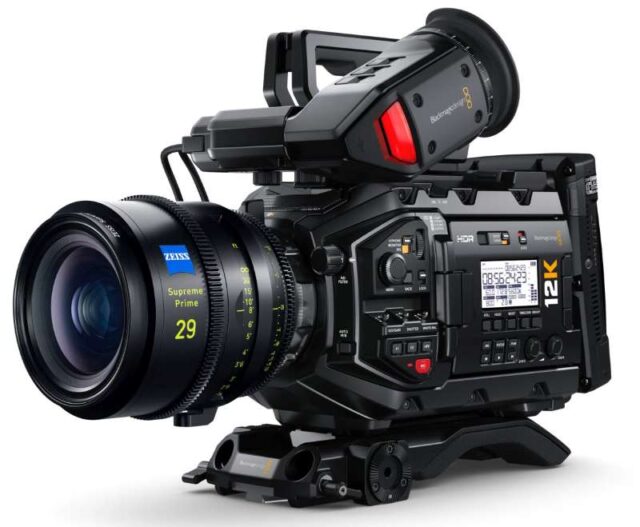 That may have made the price reduction possible, but a price drop of this magnitude is very much a marketing decision: Blackmagic is taking a hit in margin to boost market share. It’s disrupting the market with price competition. More power to its arm!

Blackmagic Design was established in Melbourne around 20 years ago, with its first camera, the Black Magic Cinema Camera, surprising the industry in 2012 with its low price and high resolution. A ground-breaking pocket version soon followed, and since then the company has consistently released affordable, high resolution video cameras with professional features and the choice of Canon EF or M4/3 lens mounts.

Blackmagic beat Sony, Canon, Panasonic, and Red Digital Cinema to market with a 12K camera, only to drop the price around 12 months later.

The Red Komodo shoots at 6K using the new Canon RF mount and has a price (appositely enough) of US$6K.

‘With this new low price for Blackmagic Ursa Mini Pro 12K, a much wider range of customers will have access to feature film production,’ Blackmagic explains in its press release.

The lower price is accompanied by the new DaVinci Resolve 17.3 processing engine, which Blackmagic says delivers speed improvements up to 3x when working in 4K and 8K resolutions.

‘The combination of 80 megapixels per frame, new colour science and the flexibility of Blackmagic RAW makes working with 12K a reality. Oversampling from 12K gives customers the best 8K and 4K images with the subtle skin tones and extraordinary detail of high end still cameras,’ states Blackmagic.

Customers can shoot at 60 fps in 12K, 120 fps in 8K and up to 240 fps in 4K Super 16. URSA Mini Pro 12K features an interchangeable PL mount, as well as built in ND filters, dual CFast and UHS-II SD card recorders, and a SuperSpeed USB-C expansion port.

Resolution goes well beyond traditional motion picture film, according to Blackmagic, with superior detail, wide dynamic range and rich, deep colour. The camera is designed for feature films, television series and even large format IMAX. The high definition around objects makes it ideal for working with green screen and VFX, including compositing live action and CGI. Super sampling at 12K means customers not only get better colour and resolution at 8K, but also a smoothness that comes from making aliasing invisible.

The Ursa Mini Pro 12K sensor and Blackmagic RAW were designed together to simplify 12 bit RAW workflows. Customers can work in any resolution in post production instantly, without rendering, while retaining the full sensor’s colour accuracy. Video shooters can shoot 12K and edit on a laptop ‘a capability that simply isn’t possible with other codecs’.