A Shepparton newborn portrait photographer has made global headlines, after online trolls hurled insults at her for posing her daughter with a bucket of KFC. 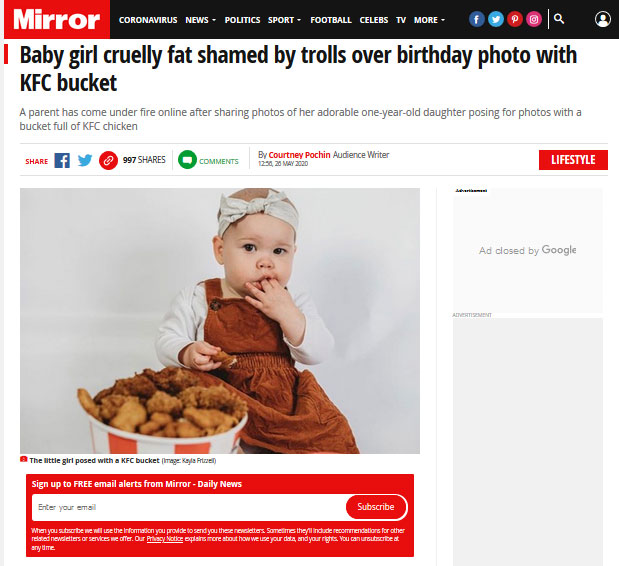 Kayla Frizzell, a KFC aficionado and newborn photographer from regional Victoria trading as More Than Words Photography, decided to celebrate her daughter’s first birthday by setting up a portrait shoot with a bucket of the colonel’s finest fried chicken as a prop.

The ‘adorable’ KFC-themed photo shoot, according to UK’s Daily Mail, was opted for instead of an equally-if-not-more-adorable ‘cake smash’ shoot.

Kayla, who describes herself as ‘loving KFC’ on her website About page, posted the photos to social media and was horrified when the trolls began to fat shame her daughter. Kidspot, a publication dedicated to parenting, reports that one unnamed troll commented ‘no wonder this baby is fat. KFC should not be given to one year olds’.

Kayla claims to not feed her child KFC – Mia is too young. However, the trolls reportedly got stuck into Kayla and her daughter.

‘I was so angry about the fat labelling,’ Kayla told Kidspot. ‘She’s an innocent one-year-old child. I don’t care about them pointing out KFC’s not healthy… but don’t call her fat because I let her suck on a chicken bone one time.’

But it gets worst. One troll claimed to have reported Kayla to the Department of Human Services. Others reportedly left scathing reviews of Kayla’s business, and began messaging her friends to inform of the KFC picture incident.

‘We already live in a judgemental society where we grow up and it’s normally teenagers feeling the pressure to be a size 10 or to fit into this, or be instagram-worthy… but to shame a one-year-old or to shame the mother who’s doing her absolute best to share a fun, creative Facebook shoot in isolation times? There’s just no need for negativity.’

While Kidspot appears to have broken this important story, the newsworthiness of this unjust conflict quickly captured the imagination of the global tabloid media. Naturally, Kayla began fielding interviews from reporters, mostly from Australia and the UK, who were taking a well-deserved break from updating the daily Live Coronavirus blog.

The KFC cake smash photos went from semi-viral with trolls to full-blown viral with fervent supporters.

‘I read the article and had to see the pics. ADORABLE!!! People in the world are not used to alternative ways of doing things, and as a result they react, sometimes because they’re a bit envious they’re not so creative. It certainly does NOT give them a pass for being so hateful, but just know you and your baby are perfect…..let nobody’s words change that perception of you and your baby,’ wrote on person on Facebook.

‘People will always be very judgemental and negative, unfortunately they can’t help but try and spread that negativity around.
I think you had an amazing idea for a photo shoot. I love it. You have a wonderful family and it shows. Your daughter must of had so much fun. Your amazing work shows the talent you have,’ wrote another.

Inside Imaging conducted its own investigation. The KFC Cake Smash photos, posted by Kayla via More Than Words on May 21, has received 236 comments and 26 shares. There are no comments even verging on slightly negative, and absolutely no trace of any active trolling. It’s possible they were deleted, either by Kayla – or the trolls themselves, in an act of supreme trolling – and the overwhelming majority of responses fiercely support the photographer.

Additionally, More Than Words has no negative reviews since posting the photos. The two most recent reviews are glowing recommendations, submitted after the story broke.

While there is no doubt that Kayla did find herself dealing with an army of online trolls, what’s worthwhile observing is how this otherwise unpleasant experience has been leveraged into a reasonably successful marketing exercise.

The fast-paced 24-hours news cycle has rendered tabloid media desperate for juicy or controversial content. This story ticks all the boxes – a conflict, verbal abuse leveraged toward the innocent, fat shaming and beauty standards, young parents, online anonymous trolls, and of course KFC.

While this kind of viral exposure may not necessarily be converted into new clients for Kayla, it’s quite likely her business will benefit with a sudden boost of traffic resulting in improved Search Engine Optimisation.