All three new lenses are dust and splash-resistant and can be used in temperatures down to -10 degrees Celsius. The company has committed to designing and developing 11 or more lenses for the L-mount with the aim of bringing the total number available by March 2021 up to 45, thanks in part to contributions from Leica (which will have eight) and Sigma (two current and 11 promised). 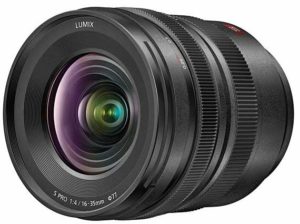 Developed as a compact wide-angle zoom lens, the Lumix S 16-35mm f/4 has an optical design consisting of 12 elements in nine groups, with three aspherical, one ED (Extra-low Dispersion) and an UHR (Ultra-High Refractive Index) element to deliver high performance across the image frame, even at f/4. Nine diaphragm blades close to a circular aperture, which optimises bokeh quality. This lens accepts 77mm filters and is supplied with a shallow, petal-shaped hood that includes a locking button to keep it in position. End caps and a soft carrying pouch are also supplied.

A high-precision, double-magnet linear motor is integrated into the AF actuator, providing high power in a diminutive size. IT drives the sensor at up to 480 fps for fast and precise autofocusing via the contrast-based DFD systems in Panasonic’s S1 cameras. A push-pull clutch mechanism provides fast and easy switching between AF and MF modes plus precise manual focusing. Focus breathing is suppressed, making this lens ideal for shooting video.

Imatest testing software showed the review lens to be a fair performer on the S1H camera with centre-of frame resolution remaining above average right up to f/11 across the focal length range. Edge softening was apparent across the same range of focal length and aperture settings. Lateral chromatic aberrations was effectively negligible and both vignetting and rectilinear distortion were surprisingly low for a lens of this type. Bokeh at maximum aperture was relatively smooth for such a wide-angle lens but not without issues like occasional outlining of highlights. Even at f/4 it was difficult to blur out background details in close-up shots.

With a constant f/4 maximum aperture this lens is not particularly fast although, since speed is seldom a priority for landscape photographers, it should be fast enough for most potential users. Its closed length of a little less than 100mm and weight of around half a kilogram, make it compact enough to use with ease on the relatively large S-series bodies.

However, the minimum focus of 25cm is not really suitable for close-ups even when subjects are relatively large. And this lens isn’t the best choice for portraiture, although it could be useful for photographing groups of people. 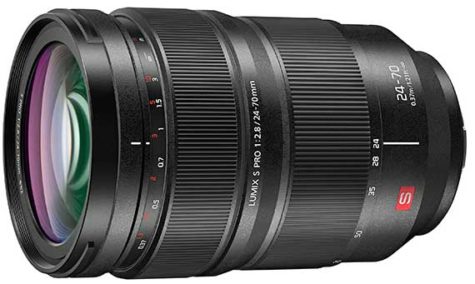 The 24-70mm zoom range is one of the most popular choices made by photographers who use ‘full-frame’ cameras so the release of this lens is timely. With an optical design comprising 18 elements in 16 groups and a constant f/2.8 maximum aperture, this lens is reasonably large and heavy. Three aspherical elements, four ED (Extra-low Dispersion) elements and one ultra extra-low dispersion element suppress common aberrations, delivering uniform image quality from the centre to the edges of the frame while constraining overall size.

This lens is equipped with a focus clutch mechanism for instant AF/MF switching and boasts an 11-bladed iris diaphragm that closes to a circular aperture for attractive bokeh. A double-magnet linear/stepping motor system provides fast, high-precision AF based on the proprietary, contrast-based DFD (Depth From Defocus) technology in Panasonic’s S1 cameras. This lens is also immune to focus breathing, making it ideal for recording video.

The 24-70mm zoom range is useful for genres as diverse as landscapes, fashion, product, event, street and travel photography. It’s not quite long enough for shooting wildlife and outdoor sports but could be used for shooting sports like martial arts, netball and basketball.

Our tests showed this lens to be a capable performer that delivered its highest resolution at f/4 with the 35mm focal length. Overall resolution was high at all focal lengths out to f/8, where diffraction began to take effect. Edge softening was substantial at apertures between f/1.4 and f/4, which is normal for such a fast lens. Common aberrations were either minor or negligible and the lens was highly resistant to ghosting and flare.

The 37cm minimum focus restricts close-ups to larger flowers and medium-sized animals, although the fast maximum aperture is ideal for selective focusing. Bokeh quality was best with evenly-lit backgrounds. The heavy weight of this lens made it possible to shoot hand-held at shutter speeds as slow as 1/10 second and obtain a high percentage of sharp images.

Owners of Panasonic’s S1 cameras now have a choice between two ‘general purpose’ lenses, the 24-70mm f/2.8 and the 24-105mm f/4 lens. You pay a premium for the faster lens, which is more than 250 grams heavier despite its shorter zoom range. 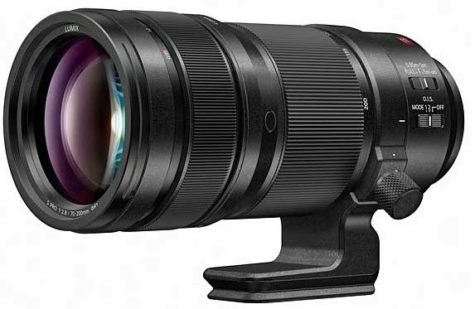 A full stop faster than the Lumix S PRO 70-200mm f/4 OIS telephoto zoom lens, the new Lumix S PRO 70-200mm f/2.8 OIS is also more than half a kilogram heavier and almost double its price. Its optical design consists of 22 elements in 17 groups with one aspherical, three extra-low dispersion and four ultra extra-low dispersion elements among them. The aspherical lens reduces size and weight and suppresses spherical aberration and distortion, while the low-dispersion lenses control chromatic aberration. Eleven diaphragm blades close to produce a circular aperture for attractive bokeh.

This lens uses the same contrast-based, double focus system as the other lenses and includes a push-pull clutch mechanism for instant AF/MF switching and accurate manual focusing. Built-in optical image stabilisation (OIS) technology can work with the sensor-shift systems in Panasonic’s S-series cameras to provide up to seven stops of shake correction. Three function buttons, embedded at intervals around the lens can be programmed to handle operations such as focus mode selections and focus hold as well as other functions not related to focusing. The lens comes with an easily-removable tripod mount that includes an Arca-Swiss foot for compatibility with professional tripods.

The 70-200mm focal length range is useful for portraiture and some types of sports photography, while the minimum focusing distance of 95cm can be used for close-ups of subjects like larger flowers and animals, where bokeh is normally smooth and attractive. Fast and near-silent focusing and zooming and immunity to focus breathing make it ideal for recording video.

The overall performance of this lens was very good although, unlike the Lumix S PRO 70-200mm f/4 OIS lens, we found noticeable edge softening at wide apertures with all focal lengths. The maximum resolution was reached at f/4 and maintained through to about f/11 where diffraction kicked in. Lateral chromatic aberration in uncorrected raw files was low to negligible and vignetting and distortion were barely detectable. It was also difficult to force the lens to flare when the supplied hood was in place.
– Margaret Brown