PANASONIC LUMIX S5: Panasonic’s latest hybrid ‘full frame’ mirrorless camera packs impressive stills and video performance into a highly mobile body with robust weather resistance.It slots in below the S1 to provide a more affordable model in the company’s full frame line of cameras that use the Leica L-mount.
RRP: $3199 (body only); $3699 (with 20-60mm kit lens) 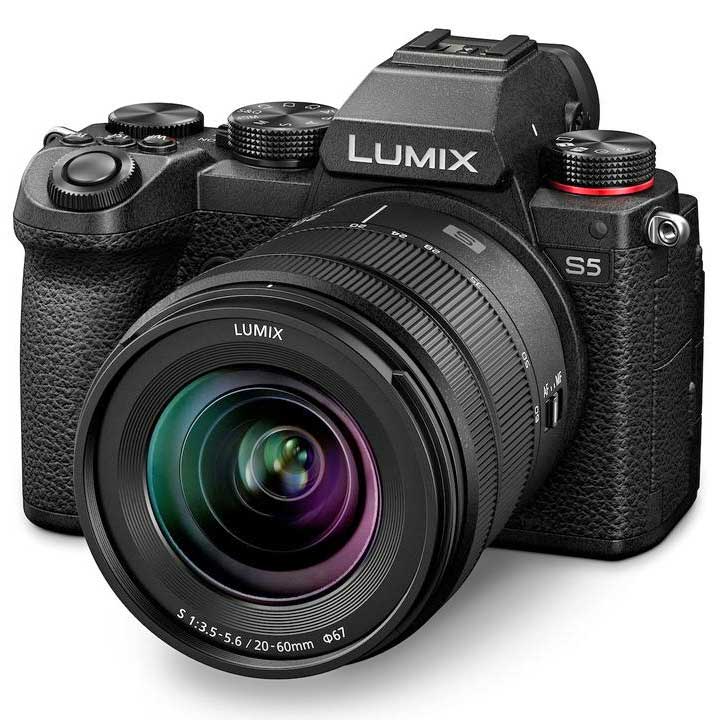 Positioned at the entry level to its L-mount line-up, Panasonic’s new S5 is targeted at hybrid photo/video shooters who need high performance for both stills and video recording. It comes with the same 24.2-megapixel CMOS sensor as the S1 and SH1 models, but with no low-pass filter to ensure maximum resolution. It also offers many of the video capabilities of the SH1, including output of 4K 10-bit 4:2:0 or 8-bit 4:2:2 video to an external device (monitor or recorder) via an HDMI cable.

Like the S1H, the S5 has a fully-articulating monitor to allow for shooting flexibility. With a resolution of 1.84 million dots it also provides touch control support, including the ability to pull focus smoothly by touch when shooting video. The OLED LVF (Live View Finder) is slightly lower specified, with a magnification ratio of approx. 0.74x, a high resolution of 2.36 million dots and a minimum time lag of less than 0.005 second.

As well as supporting Panasonic’s special 6K/4K PHOTO functions, the S5 provides HLG (Hybrid Log Gamma) modes for photo and video recording. It also supports V-Log, Like709 and V-Gamut recording modes which can encompass a wide dynamic range of up to 14+ stops. For stills photography, the S5 introduces a new 96-megapixel High Resolution Mode, which is similar to those provided in Olympus OM-D cameras and requires the camera to be tripod-mounted. In this mode, the camera automatically captures eight consecutive frames while shifting the sensor using the image stabilisation system. The combined result can be saved in RW2.RAW or JPEG format. Two processing modes are available, one favouring high resolution and the other the suppression of afterimage subject blurring.

Built-in Wi-Fi supports the 2.4GHz STA/AP (IEEE 802.11b/g/n) and 5GHz STA (IEEE 802.11ac) standards. With an always-on Bluetooth connection, the camera can be remotely controlled from a smartphone via the Lumix Sync app. The settings of an S5 camera can also be copied and transmitted to other S5 cameras when shooting with multiple cameras.

Imatest testing showed the camera performed very well as a stills camera while video performance was excellent. The camera’s contrast-based DFD autofocusing system provided fast and accurate focusing for both stills and video shooting in lighting conditions. Resolution held up well across the review camera’s sensitivity range, with fall-off starting from ISO 3200 for JPEGs and ISO 25,600 for RW2.RAW files.

Purchasing Points:
1. The S5’s weather-sealed magnesium alloy body sports dual SD card slots, one compatible with the UHS-II standard and the other UHS-I only.
2. Built-in sensor-shift stabilisation in the camera is able to deliver up to 6.5 stops of shake correction, including with a 200mm lens.
3. The body design incorporates heat dispersion components to protect electronic components and ensure stable, continuous video recording for extended periods of time. 4K video can be recorded internally for up to 30 minutes per clip.
4. The Venus Engine processor supports a native sensitivity range of ISO 100-51,200 with extensions to ISO 50 and ISO 102,400 and 204,800 available. The S5 also features Panasonic’s Dual Native ISO technology, which was introduced in the SH1 and uses a dual-base ISO setting to minimise noise and maximise image quality across a wide sensitivity range.
5. Special processing functions include Multipixel Luminance Generation and Intelligent Detail Processing, Three-Dimensional Colour Control adjustments and high-precision Multi Process NR (noise reduction).
6. Unlike the S1, the S5 does not support panorama shooting, although it does provide a 65:24 aspect ratio setting that records elongated images by cropping the image frame. Other aspect ratios include the native 3:2 format plus frame crops for 4:3, 16:9 1:1 and 2:1 ratios.
7. Three auto white balance settings are provided: a standard Auto setting plus AWBc, which ‘reduces the reddish hue of incandescent lighting’ and AWBw setting, which retains it. We found they performed as expected, although the AWBc setting reduced rather than eliminated the orange cast of incandescent and warm-toned LED lighting.
8. Anamorphic recording is also available with 4K resolution and a 4:3 aspect ratio. The camera also provides adjustments to accommodate anamorphic lenses with popular magnifications such as 1.3x, 1.33x, 1.5x, 1.8x, and 2.0x. An Anamorphic Desqueeze Display function enables users to confirm the cinemascope-size image in-camera while shooting.
9. The S5 offers the same 6K/4K PHOTO functions as its S1, SH1 and S1R siblings and supports continuous shooting rates of up to 60 frames/second in 4K PHOTO mode or 30 frames/second in 6K PHOTO mode.
10. Buffer memory capacities for JPEGs are similar to those of the S1and SH1, with space for more than 999 frames. But the capacity for ARW.RAW files or RAW+JPEG pairs is reduced from, 60 to 24 frames in the S5.
– Margaret Brown

For a more comprehensive review by Margaret, click here.