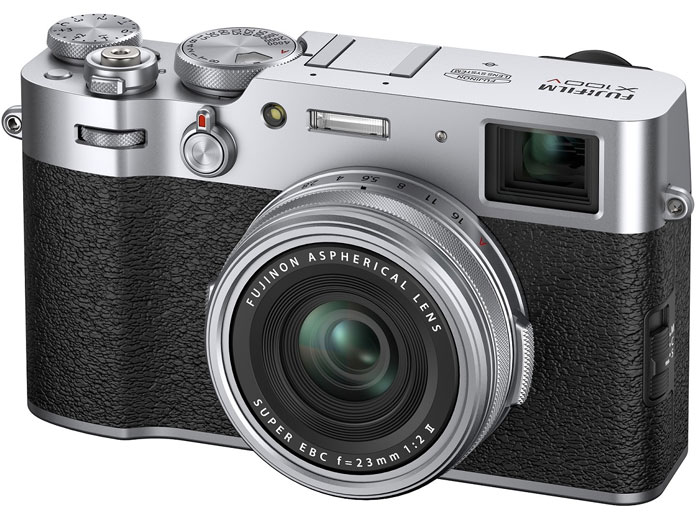 Fujifilm’s X100V premium compact camera arrives on the market in challenging times, when much of the world is in lockdown due to the COVID19 pandemic and its premium price tag will be challenging to both buyers and sellers.

But the new model brings some improvements that put it a cut above its predecessors, while retaining the rangefinder-like styling that was introduced back in 2011. Weatherproof sealing makes its first appearance in the series, although full protection is only obtained when the optional AR-X100 adapter ring and PRF-49 protection filter are fitted. Sensor resolution has been increased through use of the same 26-megapixel X-Trans CMOS sensor and X Processor 4 combination that is used in the X-T3, X-T4 and X-Pro3 cameras.

Video capabilities are similar to those offered by the X-Pro3 and include C4K and UHD 4K formats as well as FHD 60/50p and support for the F-Log profile, which records a soft gamma curve for subsequent editing. The camera can be connected via HDMI to external displays or for outputting footage to external recorders in 4:2:2 10-bit format. Peaking and zebra displays are available and time coding is supported. The camera also includes a wind filter and low-cut filter for reducing the influence of external noise on movie soundtracks. Interval recording for time-lapse movies is available. The AF-assist LED on the front panel and the LED indicator on the rear panel can be used as tally lamps to show movies are being recorded. 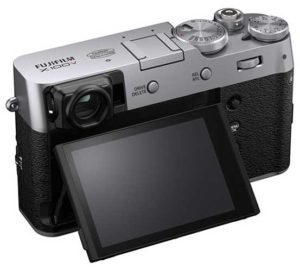 Imatest testing revealed the review camera to be a slightly better performer than the X-Pro3, delivering resolution that was comfortably above expectations with both JPEGs and converted raw files. Resolution also held up well across the camera’s ISO range, with long exposures effectively noise-free up to ISO 12800. Video quality was, if anything, better than we obtained from the X-Pro3, largely due to the lens/sensor combination.

1. The compact size, rangefinder styling and portability of this camera will appeal to travellers and street photographers. The traditional controls have barely changed since the first model in the series. Key controls are easy to locate and adjust. Weatherproofing makes it usable in challenging conditions.
2. The hybrid (optical/electronic) viewfinder has a higher eyepoint and wider dioptric adjustment range. The EVF is larger than the previous model’s with roughly 30 percent higher resolution. It uses OLED technology, rather than LCD, to provide superior colour quality and refresh rates.
3. An ERF (‘Electronic Rangefinder’) function can be used to display a pop-up window in the lower right corner of OVF frame that shows the view covered by the EVF. This makes it easy to gauge exposure and colour while using the OVF.
4. The 26-megapixel X-Trans CMOS sensor and X Processor 4 support a native ISO range of ISO 160 to 12,800 with extensions to ISO 80 and ISO 51,200. Shots taken with the high ISO settings have remarkably low noise levels.
5. The tilting monitor is a big improvement on the fixed screens of previous models. It pulls out and flips up through 90 degrees and down through approximately 30 degrees and supports touch controls, including for AF and touch shooting.
6. Continuous shooting speeds have been increased from 8 fps in the previous model to 11 fps. The buffer memory can accommodate up to 38 JPEG frames or 17 RAF.RAW files.
7. Video capabilities are at near professional levels with support for 30p recording in both C4K and UHD 4K formats as well as FHD 60/50p. Recording times are limited to 10 minutes in both modes.
8. The 425-point AF system (up from 325 points in the previous model) is the same as the system used in the X-Pro3 and offers improvements to face and eye detection as well as tracking performance. Focusing speeds have also been improved.
9. The new camera has a faster USB Type-C port, which is used for charging the NP-W126S battery, which is CIPA rated for approximately 50 / 420 frames (EVF / OVF Normal Mode) per charge or 45 minutes of video recording.
10. Because the physical dimensions of the lens remain the same as in previous models, the WCL-X100II wide-angle and TCL-X100 II telephoto conversions lenses are usable with the new camera.

Piqued your interest? For a more comprehensive review of this ‘Editor’s Choice’ camera, click here.