FUJIFILM X-T4: In-body image stabilisation makes its first appearance in the new flagship for Fujfilm’s X-Series, along with a vari-angle monitor, more durable shutter and a higher-capacity battery. The quieter, more robust focal plane shutter and improved AF algorithm are also significant advantages over the previous model, while the improvements to the camera’s ergonomics makes the new camera more comfortable to use. 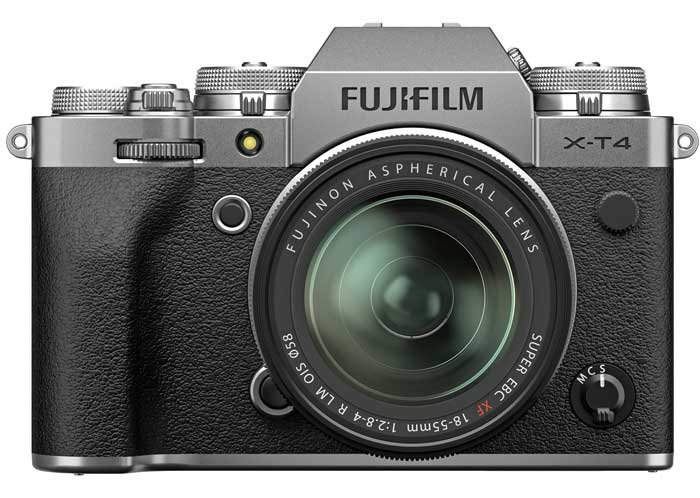 Although it retains the 26.1-megapixel X-Trans sensor and X-Processor 4 combination of its predecessor, Fujifilm’s new X-T4 camera offers a few significant improvements. The most significant is its five-axis in-body image stabilisation (IBIS) mechanism which offers up to 6.5 stops of image stabilisation that can work with lens stabilisation and digital IS for video to provide a remarkably stable platform for hand-held video shooting. The introduction of a vari-angle monitor also makes the X-T4 more versatile for videographers than its predecessor.

The new camera makes it much easier to swap between stills and movie modes with a new switch below the shutter speed dial. The dual SD card slots are now arranged vertically, making them easier to access and the card compartment cover is detachable, providing easy access when the camera is mounted in a video rig.

A new shutter mechanism, which is rated for 300,000 actuations and is roughly 30 percent quieter than the previous model, enables burst-shooting at 15 fps while also maintaining a shutter release time lag of just 0.035 seconds. An ‘evolved’ AF algorithm improves face and eye detection while doubling the tracking success rate. The new Eterna Bleach Bypass mode has been added to Film Simulation selections and the Color Chrome Effect Blue filter introduced in the X100V joins the options now provided in the X-T4.

Raw file shooters can now choose between uncompressed, reversible lossless compression and non-reversible compressed options. Highlight and shadow tones from -2 to +4 can now be adjusted by 1/2EV steps. Imatest testing of the camera with the XF 35mm f/1.4 R lens showed it to be a first-rate performer with JPEG files meeting expectations and RAF.RAW files comfortably exceeding them across a wide range of ISO settings. The new camera is also a pleasure to use.

At $2999 it’s currently the most expensive crop-sensor camera in the market. 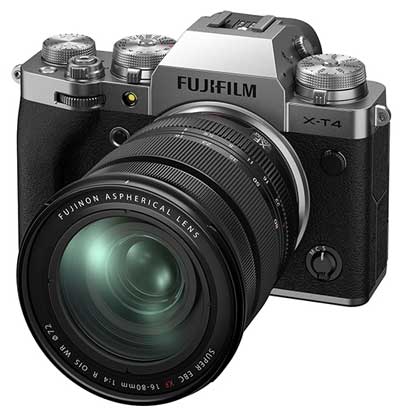 1. The tried-and-proven 23.5 x 15.6mm X-Trans CMOS 4 BSI sensor has an effective resolution of 26.1 megapixels and requires no low-pass filter to reduce moiré while achieving maximum resolution. It’s coupled to the equally capable X-Processor 4 image processing engine.
2. The five-axis in-body image stabilisation (IBIS) mechanism uses gyro sensors that can detect camera shakes eight times more accurately than before, while a shock-absorbing structure controls minor vibrations when the shutter button is pressed. Together they provide up to 6.5 f-stops of shake correction. The IBIS enables 4K recordings to be stabilised at full-frame width for frame rates up to 30 fps or with a 1.18x frame crop at higher frame rates.
3. Improvements to the body design come in the form of a higher-resolution vari-angle monitor, Stills/Movie switch and redesigned memory card compartment. The new camera has the same robust, magnesium alloy chassis and comprehensive weather sealing as its predecessor, enabling it to be used in all locations.
4. A new AF algorithm claims to be able to lock onto subjects in 0.02 seconds. The tracking success rate of the AF system has been doubled compared to the X-T3 and face and eye detection capabilities are significantly improved.
5. White- and ambience-priority options have been added to the auto white balance menu. The interval timer function also gains the exposure smoothing function introduced in the GFX 100, which is used to prevent unwanted jumps in exposure when ambient lighting changes during a recording.
6. The X-T4 supports 60p/50p recording at 4K resolution and users can choose between the professional DCI (4096 x 2160 pixel) resolution at frame rates up to 30 fps or the consumer-level 3840 x 2160 pixels with frame rates up to 60 fps (NTSC) or 50 fps (PAL) and with bitrates of 200 Mbps or 100 Mbps.
7. Movies shot with the MOV/H.264 LPCM or MP4/H,264 AAC formats are recorded to the memory card in 8-bit 4:2:0 depth but can be output to HDMI at 10-bit 4:2:2 depth. ALL-Intra compression is available in addition to the regular Long GOP setting and allows high-speed movies (up to 240 fps) to be recorded at Full HD resolution for slow-motion playback.
8. The touchscreen interface, which has been renamed Movie Optimised Control, enables the camera’s dial controls to be used while recording movies. The X-T4 also gains a new View Assist mode that applies a BT709 gamma curve to the live view screen to simulate exposures when shooting Log footage.
9. Although the camera lacks a headphone port, it comes with a USB adaptor that enables headphones to be attached to the camera.
10. The larger, higher-capacity NP-W235 battery is CIPA rated at approximately 500 shots/charge, although using the Economy mode will extend this to approximately 600 frames. The battery is charged in the camera via a supplied USB-C cable. Spare batteries are priced at roughly $140 each and the VG-XT4 vertical battery grip is available for around $500.