The company which was once Polaroid, and then became The Impossible Project, then just Impossible, then Polaroid Originals, and is now good ol’ Polaroid once again, has just released a new instant camera – the Polaroid Now. 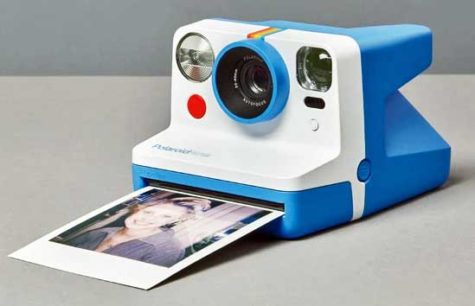 Key feature of the Polaroid Now is an autofocus system – what will they think of next! The new Polaroid Now also has a brighter flash, and a USB-rechargeable battery good for 15 packs of film.  Polaroid also says the new Now flash unit will deliver more pleasing portraits and low-light shots.

The autofocus is actually a two-lens system, with the camera switching from a fixed focus portrait lens (.55m – 1.3m) to a fixed-focus distance-focussed lens (.6m to infinity).  The camera will also enable users to shoot double exposures.

The Now camera also marks a slight change in design approach, with more rounded lines while still maintaining the distinctive Polaroid camera look. At launch it will be available in each of Polaroid brand’s rainbow colours: red, orange, yellow, green and blue – alongside the classic black and white models.

The Polaroid Now is just –  wait for it – One Step away. It will be available in June – a slight delay to original plans courtesy of the Dreaded Lergy – at an RRP of $219.95.

New instant film stock
Polaroid is launching a new special edition film to accompany the Now called Colour Wave, which ‘features a host of hues, from moody blues to warming orange and red frames, perfect for moments in the sunshine.’ It is also introducing Colour i-Type film in a black frame option.

The reversion back to the Polaroid brand from Polaroid Originals is from March. ‘In the 70’s, Polaroid changed the rules of branding with the introduction of bold, full panel rainbow spectrums across our product lines, inspiring a host of legendary brands to this day. As this new decade marks a new chapter in the Polaroid story, it’s a moment for us to celebrate that heritage, while keeping our sights set on the future. The new identity for 2020 reflects this, boldly reclaiming the colour spectrum as uniquely Polaroid.’ (Although the LBGTQIA+ lobby might beg to differ.)