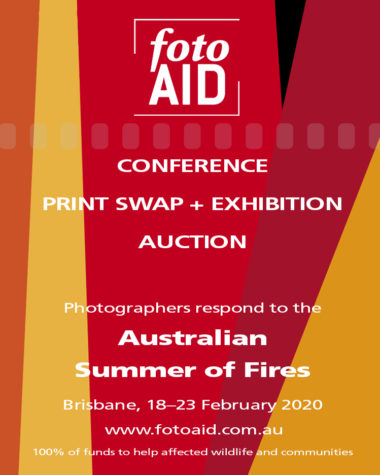 A two-day conference, Print Swap Exhibition and print auction – under the banner FotoAid – will run from February 18-23 at The Maud Street Photo Gallery in Newstead, Brisbane.

The generosity by individuals, organisations and communities to raise funds and support the bushfires-affected areas has been an exceptional display of humanitarianism. While photographers across the country launched individual fundraising initiatives, Damian thought it was possible to bring together an industry-wide response.

‘It started off incredibly simple, with a conversation about three weeks ago with Darren about the idea of getting photographers together to donate some prints, and see if we could sell them to raise money for the bushfire appeal,’ Damian informed Inside Imaging.

The Maud Street Photo Gallery, the home of the ‘new’ QCFP,  jumped onboard as a venue and supplied dates in February to host the event. Sure enough, things snowballed into something much larger. Instead of a single evening selling prints, FotoAid morphed into a six-day event with its own website and branding.

‘This ongoing tragedy is shared by all Australians,’ Darren said. ‘Apart from the immediate desire to reach out and help those affected, the fact is that all our work as photographers is derived directly from nature and community, so it’s our collective responsibility to return the favour.’

FotoAid Conference
Six speakers are confirmed for the two-day conference on February 22-23. The talks will be geared around photojournalism, exploring how photographers respond ‘to human tragedy and environmental devastation through reportage and photo essay’.

Photojournalists Elise Searson, Sean Davey, and Brad Fleet – who documented fire-affected areas this summer – will provide first-hand accounts of dealing with an emergency situation. They will be joined by international photography commentator, Alison Stieven-Taylor; former sports photographer and picture editor, Earle Bridger; and photography academic and photobook aficionado Doug Spowart. Each day will conclude with a panel discussion.

”The concept was to possibly get speakers, who were photojournalists working on the fire frontline. There was an amazing response from photographers, and the only ones who turned it down only did so because they couldn’t make it on the dates,’ Damian said.

Elise and Sean documented the fires on the New South Wales South Coast, while Brad covered fires at Cuddle Creek and Kangaroo Island in South Australia.

Tickets for the conference are a $200 donation. Click here for more info.

‘This is open to everyone. There’s no criteria, such as photojournalism or the environment. Everyone can be involved. Portrait photographer? Fantastic, get involved. Same for landscape, wedding, or family photographers. We want all sectors of the photo community to come together for the print swap.’

There are two categories within the Print Swap show, with the main difference being that one wall is dedicated to South East Queensland Instagram Users(IGers).

Photographers participating in the standard swap purchase a $100 ticket, while the IGers pay $40, and supply a digital image file. All funds are donated to charity.

Darren’s studio, Living Image, will print the photos on an A2 sheet, and IGers on A4. All photo paper is generously donated by lford. At the end of the show all names go in a draw and prints are randomly allocated to contributors.

‘We really wanted to bring all areas of the photo community together,’ Damian said. ‘So there are some enthusiast photographers who are really engaged in social media, such as Instagram and Facebook, and then there are events and conferences geared toward professional, semi-pro photographer. There’s always a crossover, obviously, but we wanted to include everyone.

‘So we have photographers that have been awarded nationally and internationally being part of the print swap, right through to photographers who post occasionally on Instagram.

Damian points out that the Print Swap Exhibition is a great opportunity for a budding photographer to have a print hung on a gallery wall.

There is plenty of wall space remaining, so photographers are encouraged to get amongst it.

FotoAid Print Auction
The Print Auction, February 22, is being finalised so Damian isn’t giving much information away. However, he says there will be a small number of prints by a few ‘big names’.

Fairfax photos from the frontline
Unrelated to FotoAid, Fairfax and Fine Art Print Co are selling prints by photographers who captured events from the bushfire frontline. All profits donated to the NSW Rural Fire Service, Country Fire Authority Victoria & WIRES.