Our story last week on virtual real estate tours made reference to the 134-megapixel Matterport Pro2 camera, a ‘beast in it’s own league’ for virtual tour imagery.

This led to an email from giant US online photo gear retailer Adorama, informing us ‘Adorama is now exclusively offering the Matterport Pro2 camera for purchase’ – and even inviting us to join its Affiliate Program, which delivers a 2 percent kickback when a reader jumps over to Adorama from Inside Imaging and buys a product. Yeah nah.

But when you Google ‘Matterport’ and ‘Australia’ another distributor pops up – Scann3d (I guess you pronounce it ‘Scanned’?), based in Fitzroy, Victoria. So much for Adorama’s exclusivity.

Scann3d or Scanned now say they have Matterport cameras in stock after a worldwide shortage, and offer some local support – although it appears the cameras need to be shipped back to California for servicing, and they don’t even offer live demonstrations if you are a prospect. Hmm. Over $5K for a camera and they can’t be bothered to demonstrate how it works? Business must be booming!

Photographers mount the Matterport Pro2 Camera on a tripod, and it rotates to capture a 360-degree space using a 3D data scanner and stills camera.

Each scan, or shot, is instantly sent to an iPad. Once all the shots are captured, they are automatically processed and stitched together on the Matterport Cloud. The camera and software is designed to be user-friendly, and no lighting equipment or additional equipment besides an iPad and tripod is required.

The software then renders a virtual tour. It can also generate 3D interactive floorplans and ‘doll’s house’ views, as below.

Scanned (to hell with their ‘3’!), appears to have been set up specifically to sell the Matterport camera and apparently has been doing so for several years. Local price is $5495 (+GST), pretty competitive with the Matterport/Adorama US price of US$3395, and Scanned claim they can ship from Melbourne in 2 – 5 business days.

Unfortunately, there’s an ongoing monthly subscription fee to use the Matterport cloud, and Matterport will clip the ticket depending on how much work you generate. Trying to understand the pricing model (especially given there’s nothing provided in Australian dollars) is a challenge, but it looks like a minimum of around $100 per month.

The Matterport software can be used with a small selection of other cameras, notably including the category-leading Ricoh Theta 360-degree camera range – which starts at under $500. Could be a less expensive way of dipping one’s toe in the virtual tour water, although you can’t do a lot with the resulting content unless you pay Matterport a monthly fee.

Is there an app for that? 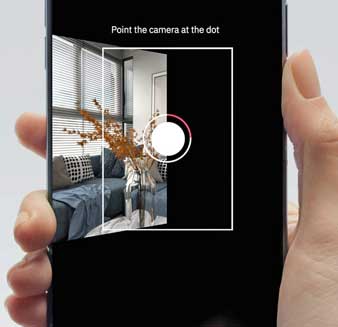 Matterport customers may not all be thrilled with the fact that the company has also just launched a free iPhone/iPad app, Matterport for iPhone, based on the AI it has garnered from the Matterport camera. While the app isn’t an alternative for the ‘beast’, that’s probably what Canon and Nikon thought when camera phones first arrived on the scene!

With the Matterport app, iPhone owners can capture a 3D environment; personalise it with embedded notes, links, labels or videos; and share it with a simple click. Visitors can explore the spaces in immersive 3D that is just like being there in person. They can even digitally measure walls, doors, windows or furniture. But while the app is free, most of those capabilities require the payment of a monthly subscription fee to Matterport.

Customer reviews on the Apple store are a mixed bag. There are almost as many claiming it crashes regularly and that Matterport offers no customer support, as those claiming it’s an unbelievably cool and the future of real estate imagery.

Here’s a practical review of the Matterport Pro2 which gives a better idea of its strengths and weaknesses in the feild.