Panasonic has announced late September availability of the Lumix S5 full-frame mirrorless camera with a body-only RRP of $3199. 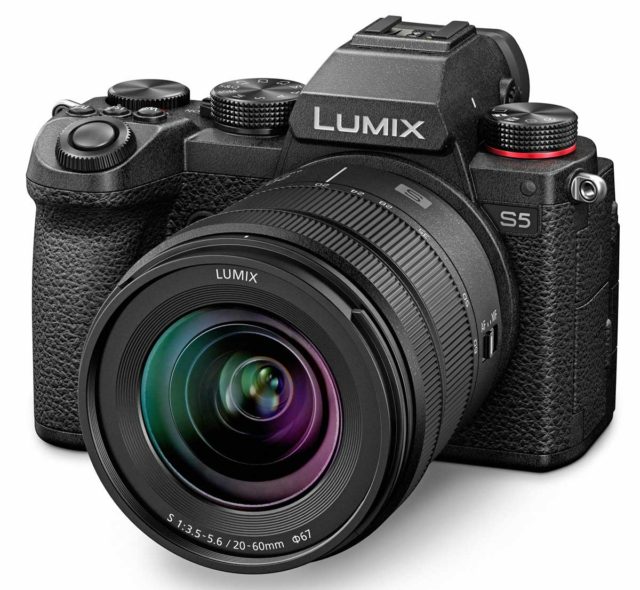 It’s compatible with Panasonic’s DMW-XLR1 microphone adaptor, allowing professional audio equipment to be used with video. Additionally, RAW video output via HDMI up to 5.9K will be available via a future firmware update.

The S5 has the same 24.2-megapixel 35mm full-frame CMOS sensor introduced in the Lumix S1, supported by 5-axis ‘Dual IS 2’ image stabilisation system with up to 6.5-stops of camera shake correction. It also claims something called a ‘Deep Learning autofocus algorithm’ that detects specific subjects – humans and fast-moving animals – with great accuracy.

The camera’s full magnesium alloy, weather-sealed body is splash and dust resistant.It has dual SD card slots and as

A new feature is ‘Live View Composite’, which combines multiple exposures into a single image that emphasises bright points while suppressing overexposure of the total image and maintaining the shadows. The S5 also features sensor-shift 96-megapixel high resolution mode, which can capture detailed landscapes with increased dynamic range and colour reproduction.

‘The hybrid S5 packs the essential capabilities of our ground-breaking flagship S Series cameras into a small, mobile and robust body. Enthusiasts who want to take their creativity to the next level can harness the incredible image quality of a powerful full-frame sensor,’ said James Choi, product marketing manager, Imaging, Panasonic Australia.

‘The S5’s compact size belies the impressive performance under the hood – this camera is class-leading in the sheer breadth of video and stills capabilities it puts in the hands of content creators.’ 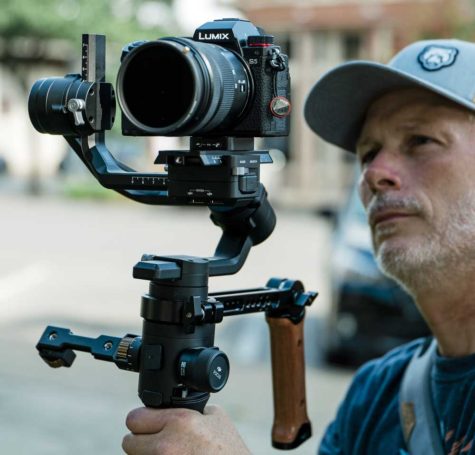 V-Log/V-Gamut with a dynamic range of 14+ stops. Practical tools like a Waveform Monitor and V-Log View Assist are included.

With an optimum layout of heat dispersion components, heat is effectively transferred externally, which results in stable, continuous video recording for an extended time.

With the new Live View Composite function, the camera releases the shutter at designated exposure intervals and produces a single picture combining all the areas of high luminosity such as lights, stars or fireworks. The photographer can monitor this in Live View.

A high-precision gyrosensor joins the Dual IS system of 5-axis in-body stabilisation and 2-axis optical stabilisation in selected lenses for improved shake detection and compensation – up to 6.5 stops.

The 96-megapixel High Resolution mode creates highly detailed images that can be turned into enormous prints or used in commercial imagery. Using sensor shift technology, it captures and combines eight consecutive images in-camera. It can be  used when moving subjects are in the scene, by switching to the sub mode.

PRECISE AF: The lens and sensor communicate at a maximum 480 fps. Contrast AF with DFD technology allows the S5 to achieve an ultra high-speed, high-precision AF of approximately 0.08 sec. Low Light AF operates at levels of down to -6EV luminance.

Panasonic claims the camera keeps tracking subjects when they move quickly, turn away, tilt their head or move far away from the camera. Also, improvements to DFD technology have enhanced AFC, which allows the camera to keep tracking small or fast-moving subjects.

DESIGN: The OLED LVF (Live View Finder) has a magnification ratio of approx. 0.74x, 2.36 million-dot high resolution and a time lag of less than 0.005 sec. The free-angle 3-inch LCD rear monitor (3:2 aspect, 1.84 million dot) with touch control allows for quick changes to settings, even when the user is in front of the camera.

Other shooting assist functions include Frame Markers for checking composition during recording. A wide range of aspect ratios are supported, including those for popular social media platforms – 16:9, 4:3, 1:1, 4:5, 5:4 and 9:16. In addition, the REC Frame Indicator displays an red frame for checking at a glance if the camera is recording or not.

The S5’s dual SD Card slots include one compatible with the high-speed, high-capacity UHS-II (Video Class 90) and the other with UHS-I. Users can select Relay Recording, Backup Recording or Allocation Recording modes.

The camera uses a new DMW-BLK22 high-capacity battery which meets its power demands in a small form factor. The S5 battery is also backwards compatible with the GH5, GH5S and G9. The camera’s battery can be recharged either via AC or USB, which is convenient if you are travelling and want to use a USB power bank. The S5 is also capable of power supply and delivery via USB-C, making it possible to continuously power the camera with a USB power source.

Content sharing with smartphones is via Bluetooth 4.2 Low Energy connection, Wi-Fi 5-GHz (IEEE802.11ac) and 2.4-GHz (IEEE 802.11b/g/n). With an always-on Bluetooth connection, a smartphone can act as the camera’s remote control via the Lumix Sync app. The settings of an S5 camera can also be copied and transmitted to other S5 cameras when shooting using multiple cameras.

The S5 is compatible with the Lumix Tether applications for tethered shooting via USB. Users can control the camera by connecting it to a PC. Images can be viewed on a large PC screen while shooting. For live streaming, Lumix Tether for Streaming (Beta) with Live View mode is available. Lumix Sync for iOS/Android devices enables image transfer to a smartphone or tablet via easy wireless connection.

NEW FIRMWARE: Panasonic will release firmware updates for the LUMIX S1R, S1H and S1 by the end of 2020 which will enable the S1R to record 5K video. In addition, the AF improvements introduced with the S5 will be available on the S1R, S1H and S1 for both video recording and still shooting. In addition to the eye, face and body, the head is also separately recognised by real-time detection technology to provide even more precise focusing. The camera keeps tracking subjects when they move quickly, turn away, tilt their head or move far away from the camera. Also, improvements to DFD technology have enhanced AFC, which allows the camera to keep tracking small or fast-moving subjects.