There has been yet another US copyright court case concerning whether a news outlet embedding a photo from Instagram in an article constitutes copyright infringement. This time the controversial Fair Use exemption to copyright infringement, a topic likely familiar with Inside Imaging readers, was successfully argued in Boesen v United Sports Publications.

In late 2019 Danish tennis player, Caroline Wozniacki, announced her retirement via an Instagram post, which included a cropped low-res version of an image captured by Danish photographer, Michael Barrett Boesen. The image shows Wozniacki in her early teens during one of her first professional tennis games.

Long Island Tennis Magazine, operated by United Sports Publications (USP), covered the story in an online article and embedded Wozniacki’s post using the Instagram Embed API. They didn’t receive permission or a licence from Boesen, and a bizarre detail is USP also later registered the copyright of the photo.

Instagram, and other social media platforms, offer users an Embed API that allows visual content to be generated on a third-party website, while crucially remaining hosted on Instagram’s servers. News outlets are fond of the Embed API, as displaying Tweets, YouTube videos, or Instagram posts is a simple solution to provide additional sources. Social media posts can form the basis of an entire news story, such as when a celebrity posts an announcement – like Wozniacki’s retirement; but the Embed API is also a copyright loophole to sidestep licensing an image for an article.

After discovering USP had embedded Wozniacki’s retirement post, Boesen filed suit against USP and the publisher’s lawyers argued the infringement was fair use. To prove this, they were required to show how several ‘Fair Use Factors’ were met to create a fundamentally new or derivative work.

The first factor relies on whether the usage is ‘transformative’, and a recent ruling covering a similar scenario provided the legal precedent to easily prove this. US singer, Cardi B, posted a photo of herself on Instagram at a fashion show. The post was embedded in an article about the singer’s lipstick, which she was wearing in the photo. The court found the usage was transformative, as the original context – Cardi B at a fashion show – had transformed into a topic about the shade of lipstick worn by the subject.

This same, um, logic was argued by USP, and Judge Ross agreed that as the Instagram post ‘was the very thing the article was reporting on’ and ‘incidentally included the photograph’, she was satisfied it was transformative. Had the article merely used the post ‘as a generic image’ or to depict Wozniacki playing tennis at a young age, the result would have been different.

The second Fair Use Factor is ‘the nature of the copyrighted work’ – factual, scientific or published works are more likely to be considered Fair Use compared with creative, artistic or unpublished works. Judge Ross found the image of a famous athlete has ‘both informational and creative elements’ as it documents a subject and requires technical skill and aesthetic judgement.

Because Boesen had published the image on his own social media and website, along with Wozniacki sharing it on Instagram, the work also became ‘published’ and Judge Ross noted the factor ‘tips slightly in the defendant’s favour’.

The third factor is the proportion of the original work used. Because Wozniacki cropped the image and published a low-res copy, and the Instagram Embed API ‘retains all the markings of Instagram’ such as Wozniacki’s caption, profile, the Instagram logo, this factor again tips in the defendant’s favour. Famous art appropriator, Richard Prince, was embroiled in a copyright lawsuit over his controversial print series, New Portraits,  showing people’s Instagram posts. It’s quite likely his lawyers will follow a similar argument regarding the additional elements on the border of the print. 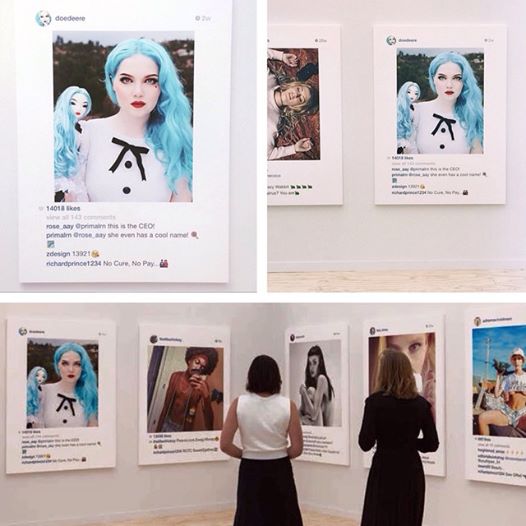 Boesen argued that USP could have commissioned its own freelance photojournalist to photograph Wozniacki, published the story without a photograph, or licensed the image from the plaintiff before publishing. But Judge Ross disagreed, stating that these options ‘would defeat the purpose of the story: to inform readers about Wozniacki’s retirement announcement on social media’.

The fourth and final factor revolves around whether the use affects the market value of the content. Since the photo didn’t appear on its own, but as part of a post alongside text, ‘it is implausible that defendant’s use would compete with plaintiff’s business or affect the market or value of his work’.

And with that, Judge Ross was satisfied that USP’s copyright infringement was Fair Use.

There have been a few copyright court claims this year involving photographers and news outlets using the Instagram Embed API, an untested legal grey area.

Previously in the US, these copyright disputes revolve around a Server Test. The argument is that embedding cannot be considered copyright infringement, as the material isn’t hosted on the defendant’s website server. But a 2018 ruling found that several news sites had infringed copyright by embedding a photo, setting shaky precedent for future use of the Server Test.

In April, US courts threw out a lawsuit by photojournalist, Stephanie Sinclair, after tech news site, Mashable, successfully argued that Instagram’s T&Cs granted it a sub-licence to embed images. But then in July, following another high-profile lawsuit, Instagram told tech media outlet, Ars Technica, it doesn’t grant anyone a sub-licence by using the Embed API, and Sinclair’s ruling will now be revised ‘in order to correct a clear error’.

These cases have all been in the US, and in Australia it remains unclear what kind of results would emerge from these copyright cases.