This arrived in the in-tray from Canon on January 31: ‘GOODBYE. We want to thank you for using Irista over the years and hope that you’ve enjoyed its services. Hopefully by now you’ve downloaded your photos and videos, but if not, you can do so here until the end of the day.’ 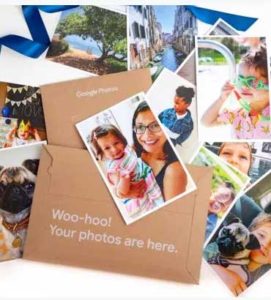 This was the final farewell letter as Canon shuts down its Irista image storage business, launched in 2014. Irista offered both free storage, and for larger image collections charged a subscription fee. There has been no explanation for the closure. Former Irista subscribers are being offered a complimentary two-month subscription to Adobe Lightroom.

So another online image storage service from the photo industry bites the dust. Meanwhile, Google Photos seems to go from strength to strength, with its latest initiative a trial of a monthly ‘automatic’ photo printing service using its not inconsiderable and ever-growing AI smarts.

For US$7.99 a month, Google will send you 10 4×6-inch bordered prints automatically selected from your last 30 days picture-taking.

Subscribers can chose between ‘mostly people and pets’, ‘mostly landscapes’ or, ‘a little bit of everything’ and Google Photo’s algorithms will select what they, um, ‘see’ as your best 10 shots. You can edit the photos prior to them being sent off for printing, so maybe you are even allowed to substitute Google Photos choices with your very own.

A plain brown envelope will arrive to your door every month containing the photos which are ‘printed on cardstock’, whatever that means. There’s no information about what photo printing technology is being used.

This is just a trial program at the moment and only available to a limited number of Google Photos subscribers in the US. It’s the latest in several initiatives in photo printing from the online behemoth. In 2017 Google began to offer photo books via Google Photos and this was followed by canvas prints last September.

The Google Photos app also allows users in the US to print and collect photos at the nearest CVS or Walgreens outlet.

Google Photos offers free unlimited storage (albeit subject to some degree of image compression). With many millions of people using the free service – the Android app lists 23 million downloads alone – an automated photo printing option like this available globally would only have to have  a couple in every 100 Google Photos users take it up to be one of the largest photo printing businesses in the world.